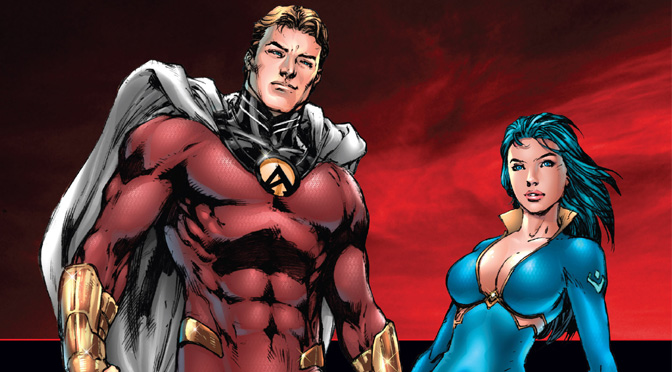 DC Comics’ iconic superhero character “Superman” has long been the subject of exploration by way of character doppelganger. Legendary Comics’ title “The Rise and Fall of Axiom” may seem like yet another addition to the increasingly long line of “Superman” deconstruction stories, but it contains enough variations on the formula to entertain. Superman arrives on Earth as an extraterrestrial infant: American writer Mark Waid has written many notable stories involving Superman for DC Comics and knows the character mythos as well as anyone. In “The Rise and Fall of Axiom”, Mr Waid instead considers a pair of adult extraterrestrials with inhuman powers, the male Axiom and the female Thena. The two aliens arrive on Earth and cure cancer as a gesture of goodwill to humanity. They then proceed to become the planet’s de facto protectors by fighting crime, averting natural disasters, and intervening in unjust wars.

The main gist of the comic, as the title implies, is that one of the aliens has turned into a dictator, departing from his altruistic role. This character inversion is not without justification: in their presence, humans have become complacent, reckless, and increasingly demanding. It is this same recklessness that led to a man-made disaster only averted by Thena’s self-sacrifice and death.

Axiom, driven by the loss of his companion, tries to find solace in a human female at first – a subtle allusion to Superman’s longstanding human romantic interest, Lois Lane – but this soon fails. Axiom’s emotional state is compounded with frustrations over the responsibility of playing nanny to the world that is, at both times, dependent yet unable to fully trust him. Axiom decides to stop trying and just do what is easiest for him: declare himself a god and put the world under his rule.

In the process, Axiom also drops his physical disguise. Axiom’s and Thena’s actual appearance, as to be expected of extraterrestrials, is inhuman and hideous to Earthlings. The two aliens felt compelled to adopt features pleasing to human eyes. This also hints at one of the creature’s frustrations – Thena is apparently considered beautiful in their home world, but hid this in order not to aesthetically offend humans.

Mr Waid is also responsible for the excellent “Superman” deconstruction, “Irredeemable.” and “Strange Fruit”. It would not be surprising for people to assume that this new story is a rethread of “Irredeemable”. Fortunately, “The Rise and Fall of Axiom” is different enough, although it is still clear that the underlying premise of super-powered aliens arriving on earth, as with “Strange Fruit”, is clearly a topic Mr Waid deems worthy of repeat exploration..

Unlike “Irredeemable”, “The Rise and Fall of Axiom” is not fatalistic. The comic is somewhat kinder to its antagonist – it takes the time to understand Axiom’s emotional breakdown, and portrays him at his worst as just insecure and angry, as opposed to a psychopathic mass murderer.

The resolution is more grounded than “Irredeemable”, in that there are no other super-powered characters in the story besides Axiom and Thena. Axiom is beaten and made to see the errors of his ways by a human aided by all the technology and manpower that the United States Department of Defense can muster. This protagonist also shares a past with Axiom, and is possibly the only human in the world who understands the alien.

The comic interestingly finds a serviceable way of addressing the powers of the Superman archetype – how feats such as lifting a warship without it fracturing under its own weight defies the laws of physics. This approach by Mr Waid leads to the enslaved humans devising countermeasures to deal with the alien: they manage to disrupt Axiom’s powers and bring him down momentarily. In the process the humans convince him that he is no longer needed. Axiom leaves the planet and in a whispered warning, revealed why he and Thena arrived in the first place. “They are coming,” says Axiom as his last words to the protagonist, and this hints at a looming otherworldly threat.

But the comic ends with the humans adjusting to life without their great protector, and the protagonist pragmatically building copies of the weapon that beat Axiom. This is a stand-alone comic, so the threat hinted at is keeps the conclusion open-ended without spring-boarding into the foreshadowed menace.

There is nothing startlingly innovative about this title, but it is entertaining.