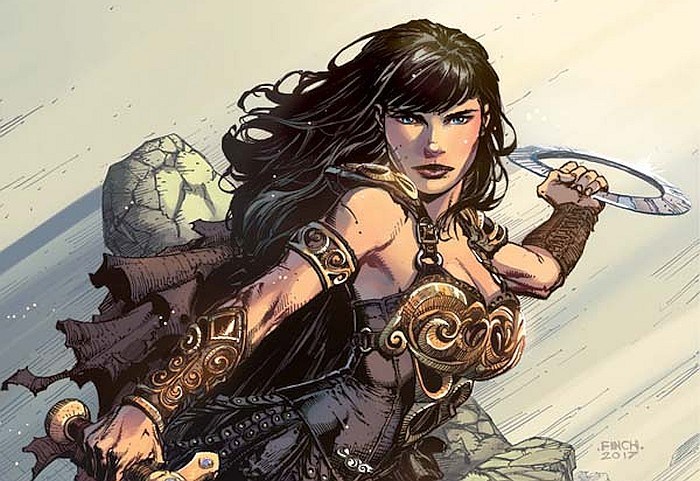 Some television shows attract an audience better characterised as zealots rather than fans. Xena: Warrior Princess is an American fantasy TV series that aired from 1995 to 2001, and maintains a small legion of zealots. The concept was originally a spin-off of another fantasy TV series, Hercules: The Legendary Journeys, but it managed to gain a strong cult following and surpassed its predecessor in terms of popularity and commercial success. The franchise focuses on the titular female warrior, who is traveling the world while seeking to atone for her past sins. The farm girl Gabrielle, who serves the role of sidekick and comic relief (and possible lover), accompanies Xena in all her travels.

This new comic book, published by American comic book publisher Dynamite Comics, serves as a reboot of the franchise or at least a jumping-on point for new fans. The story focuses on Xena and Gabrielle’s first meeting. Writer Meredith Finch first introduces readers to Gabrielle, who is on her way to Athens to make a living as a bard. She is ambushed and captured by a trio of bumbling and dysfunctional bandits. Xena coincidentally appears and easily saves Gabrielle from the bandits. The would-be highwaymen are then revealed to be former lackeys of Xena. Gabrielle uses this information to coyly guilt Xena into letting her tag along.

Veteran fans of the Xena: Warrior Princess franchise will notice that this comic book changes the circumstances that led to Xena and Gabrielle’s first meeting. It makes the reboot a little bit odd. The Xena: Warrior Princess franchise is a product of its time. Despite its influence and the character’s status as an icon in the LGBTQI community, the television show would struggle to attract a new audience if it were released now. This means that the comic’s primary audience will be veteran fans of the franchise, who most likely just want to see a continuation of Xena and Gabrielle’s story. This should concern the publisher. That loyal audience will most likely not appreciate another origin story, especially one that is substantially different from what they are familiar with.

We find it difficult to recommend Xena: Warrior Princess Vol. 4 #1 as a worthwhile read. Aside from the problem stated in the previous paragraph, there is also the matter of the story being too short and unsatisfying. The comic’s 20-plus pages is wasted on a single scene that would have only taken a couple of minutes in the TV show. It merited only a few pages of the issue. We feel that the first issue could have served better if it had more content and did not splurge page real estate on a clumsy fight scene and unnecessary banter with throwaway characters.

Xena: Warrior Princess Vol 4. #1 can only be recommended to obsessive fans of the franchise, but even then we are not fully confident that the comic will be appreciated. Upsetting the zealots will not ensure the comic’s longevity.

Who Knows What Evil Lurks in the Hearts of Men?: The Shadow #1 (Review)