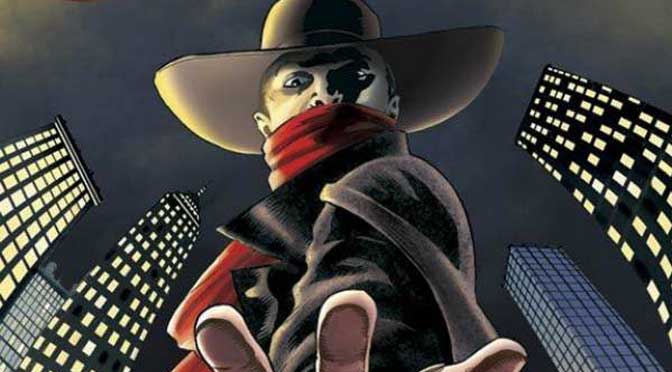 “The Shadow” #1 is the first issue of a new comic book series from US publisher Dynamite Entertainment. The Shadow is an anti-hero/vigilante with an 80 year history in pop culture. The Shadow was originally limited to the role of narrator for the 1930s radio drama, “Detective Story Hour”, before eventually being developed into an actual literary character for use in a pulp magazine series. The character eventually became popular enough to find its way to other media, including comic books, comic strips, television serials, video games, and even motion picture films (with the most recognizable one to today’s audience being the 1994 film starring American actor Alec Baldwin.)

This new comic book series refreshingly sets the story in modern times. But it does not ignore the fact that the main character has been around since the 1930s, in terms of story continuity. The story starts with a nurse named Mary Jerez, who recounts a story to an unnamed patient suffering from severe burn injuries all over his body. As Mary reveals, she was the survivor of a school shooting incident and was only alive due to the timely appearance of The Shadow.

The key part of the story is The Shadow’s distinctive laugh, which has been etched in Mary’s memory. It is this same ominous, disturbing laugh, along with evidence of the patient’s old age, that led her to believe that the man is not a random burn victim, but is The Shadow himself. The Shadow’s laugh transfixed radio audiences in the 1930s. Many actors played The Shadow for the broadcast, the most famous of which was auteur and actor Orson Welles. Mr Welles starred in thirty episodes, starting from September 1937. These recordings, featuring the notorious laugh, are available on the Internet Archive website. Yet the most effective voice of The Shadow was Frank Readnick Jr. As described by John Olsen on website ThePulp.net, “It was Readick’s voice that became recognizable as The Shadow. He truly made the role his own with his creepy, harsh whisper. When he spoke the opening and closing lines and gave out with that sibilant laugh, radio listeners everywhere felt a shiver at the uncanny sound. He remained in the role until 1935, at which time The Shadow radio program left the air for two years.” This comic pays homage to that sinister, chilling cackle which to a large extent drove the character’s popularity in the age of radio.

This first issue does a great job of introducing The Shadow to new readers, without:

a. becoming mired in the character’s lengthy, convoluted history. Everything that a reader needs to know about The Shadow character is made obvious through the flashback scenes. Other details are either unnecessary or can be safely added through future issues.; and

b. changing anything substantial about the character.

The slow pace and relative lack of action seems measured. Aaron Kessel at Outright Geekery notes in his review the slow creep of which was the hallmark of Vertigo Comics. Mr Kessel correctly observes, “I know the Spurrier was a regular over at Vertigo… so this tale has a very Vertigo feel to it. The story flows nicely and logically and is a very good start to a story. It may read better collected, but as it is, I was not disappointed.” There is indeed the feel of Matt Wagner’s and Steve T. Seagle’s “Sandman Mystery Theatre” (Vertigo Comics, 1993-1999) attached to this title.

If there is one significant complaint about The Shadow #1’s story, it is the method in which exposition is delivered. The flashback, despite being rendered with dialogue and with a monochrome color scheme (so as to make it obvious that this happened in the past), is still pushed by Mary Jerez’ heavy-handed narration. It is normal – or even expected – for Mary to have a jaded, colored view of society given what she has gone through. But when her voice is over-used to drive the narrative, it gets in the way of the story. It may ruin the tone of the story for readers who find Mary’s verbiage to be insufferable and cliched.

Hopefully, the mysterious man regaining consciousness means that the next issue no longer requires Mary as a narrator, and the plot can unfold naturally without relying on a narrative superstructure. The first issue, to its credit, has already done a good job of setting up a couple of mysteries for the readers to anticipate – is the burned man really The Shadow? And regardless of the man’s true identity, what events transpired to cause such a horrible injury?