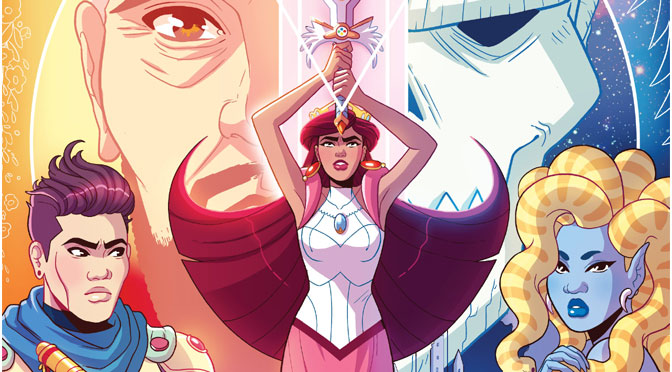 It seems appropriate that we are reviewing this title on International Women’s Day. At first blush, Oni Press’ “Another Castle” seems targeted exclusively towards children. The art style features Manga-esque large eyes, exaggerated facial expressions that bring to mind a healthy mix of classic Disney artwork and anime, and the panels use pastel colors liberally. Even the title hints that it was inspired by Japanese game company Nintendo’s retro video game “Super Mario Bros”. This game has in each of its “end levels” a notice telling the eponymous plumber that he must soldier on, because the princess he wants to save is in “another castle.”

And taken at face value, the comic is indeed geared towards a young and female demographic. The plot concerns a headstrong princess, Misty, who steals the kingdom’s prized enchanted sword before running away on a mission to slay an evil tyrant and possibly get out of a prearranged marriage. It is the kind of story that you’d normally see on a family-oriented animated film or a Saturday morning cartoon. There are also a lot of wholesome comedic elements thrown in.

However, “Another Castle” does tackle a few more serious themes, for those willing to dig a little deeper. It presents a heroine who defies gender norms and does things that readers would most readily associate only with male characters, in the process making a male supporting character look inept by comparison. Then, the princess is captured by a dragon and sent to the tyrant she was supposed to defeat. Then, in a dark twist, Misty is forced to marry him.

The tyrant, named Lord Badlug the Terrible, is a monarch who so wanted to protect his kingdom that he sold his soul to magical dark forces in exchange for immortality and supernatural powers. There is potential with this character, presently lost underneath a mountain of clichés and (intentionally) cheesy dialogue. For now, Badlug comes off as one-dimensional. But it looks like the story will delve deeper into the character. Badlug shows pragmatism by choosing to take over lands through marriage (as opposed to murderous invasions), while at the same time demonstrating a proclivity for violence, which is exemplified by a part of his former kingdom that he personally burned to the ground out of frustration.

If this were a conventional story, Princess Misty (or, more precisely, her male counterpart) would have done something clever and sneaky in order to escape Badlug’s domain. Instead the protagonist chooses to stay in captivity after realizing that escape would only force her kingdom into direct conflict with Badlug. Misty is patient and cunning – two attributes not ordinarily associated with castle-trapped princesses. This title explores the rare scenario where the female protagonist is thoughtful, and is someone who is willing to retreat and cut losses if the battlefield favors the enemy. We look forward to Misty’s ongoing adventures.