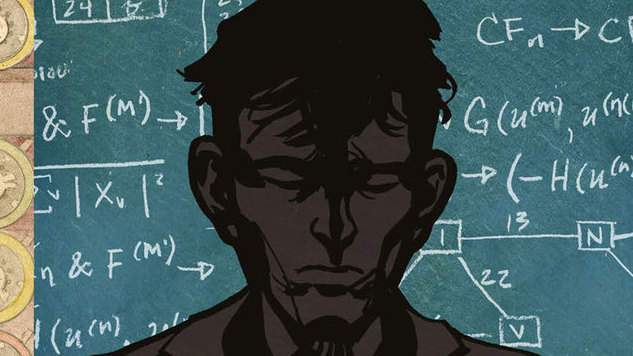 The afterword to this comic notes the 2009 formal posthumous apology to Alan Turing in the United Kingdom parliament made by then-Prime Minister Gordon Brown on behalf of the British Government. It also notes the 2013 pardon granted by Queen Elizabeth II for the conviction of Mr Turing of the crime of homosexuality.

What it and the substance of the comic does not capture are the monumental ramifications of Mr Turing’s work:

1. “Turing’s work at Bletchley Park was vital in ending the war. General Dwight D. Eisenhower told the British intelligence chief in July 1945 that ULTRA, “saved thousands of British and American lives and, in no small way, contributed to the speed with which the enemy was routed and eventually agreed to surrender.”” (Source: Central Intelligence Agency)

2. “Some historians estimate that Bletchley Park’s massive codebreaking operation, especially the breaking of U-boat Enigma, shortened the war in Europe by as many as two to four years.” (Source: BBC http://www.bbc.com/news/technology-18419691 )

3. “At a conservative estimate, each year of the fighting in Europe brought on average about seven million deaths, so the significance of Turing’s contribution can be roughly quantified in terms of the number of additional lives that might have been lost if he had not achieved what he did. If U-boat Enigma had not been broken, and the war had continued for another two to three years, a further 14 to 21 million people might have been killed.” (Source: BBC)

4. “Only decades later were Turing’s associates, and then, historians of computing, mathematics, and cryptography, able to reveal in detail how crucial Turing’s contribution had been to the war effort, to the ultimate Allied victory, and to hungry babies like me, born into what then looked like a losing effort.” (Source: The Atlantic)

Winston Churchill was acutely aware of Mr Turing’s contribution, which the comic acknowledges.

But as writer Jim Ottaviani notes, none of this was apparent to the general public until official secrets legislation allowed that information to enter the public domain in the 1970s. Perhaps the consequences of Mr Turing’s efforts is simply too vast to capture in a comic book. Mr Ottaviani has concentrated instead more upon the personality of the man – the consequences of Mr Turing’s very eccentric personality, including:

a. a strange engagement to a mathematician colleague, followed by the awkward dissolution of that relationship;
b. very long distance runs, which included, prior to departure, sending a change of clothes to the destination by post;
c. his parents’ struggle to adjust to Mr Turing’s childhood foibles; and
d. Mr Turing’s naïve, detailed written description provided by him to police of how, after the conclusion of the war, Mr Turing was being systemically robbed by his gay lover, which ultimately led to his arrest and conviction for homosexuality.

Mr Turing submitted to estrogen injections as an outcome of his trial, and they caused him to become very fat and ungainly. Mr Ottaviani reflects on Mr Turing’s struggle to deal with this denigrating punishment: that he tried to view it as a metamorphosis whereby going through a period of unhappiness and physical bloating he would somehow transform into a better person. But instead, eventually Mr Turing killed himself with a cyanide-laced apple. It is profoundly sad conclusion to a brilliant life. Mr Ottaviani captures that sentiment extremely well.

Mr Ottaviani otherwise uses the format of the comic book to his advantage in telling a story about a maths genius who did not think in lateral ways. One image depicts Mr Turing’s suggestion on how books could be better printed so as to conserve eye motion:

Another series of panels has Mr Turing and his fiancée, Joan Clarke, speaking to each other in mathematics, which is as endearing as it is incomprehensible.

The only aspect to this story which we struggle with is the inconclusiveness of the series of interviews with Mr Turing’s family and associates. The interviews are helpful to explain Mr Turing’s life and state of thinking – a much better mechanism than trying to get inside Mr Turing’s unique head. The split sequence is cast in monochrome, and at one stage appears to be taking place in the afterlife (one of the characters describes himself as dead). Yet it goes nowhere. There is no closing of the loop with the interviews. Our conclusion is that Mr Ottaviani has placed himself within his own story, imagining chats to Mr Turing’s live and dead associates in a way of getting to the crux of the story. Once this device is exhausted, it is abandoned. This leaves the reader scratching her head.

But otherwise, The Imitation Game is a well-executed, fascinating, tragic story, which Mr Ottaviani has created with dedication and thorough research.

A 2013 petition to the United Kingdom Parliament to have a statue in honour of Mr Turing placed on the fourth, empty plinth at Trafalgar Square garnered only a very few votes despite a supportive opinion piece in The Times of London. A second 2013 petition to place Mr Turing’s face on the ten pound note only gathered 28000 signatories. This very fine comic book, and the 2014 motion picture on Mr Turing’s life (also called The Imitation Game), perform a role in educating the public on Mr Turing’s genius. But a more fitting tribute to a man whose genius saved millions of lives, and who was then so poorly treated by the nation he helped save, is overdue.