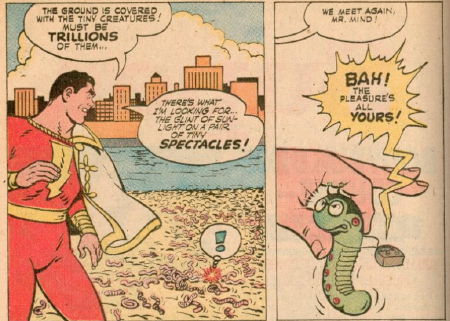 American publisher DC Comics have been understandably keen to promote the comic book adventures of the superhero Captain Marvel (now known as Shazam) given the imminent release of the Shazam motion picture.

Captain Marvel / Shazam has a pedigree dating back to 1940. DC Comics has announced the release of a hardcover would have collected the entire 24-chapter 1940’s Golden Age storyline introducing Mr. Mind, a malevolent, sentient worm who allies itself with the Monster Society of Evil against Captain Marvel.

But the content is manifestly and offensively racist by the standards of today. Is the issue overstated? We do not think so. Here are some of the most blatant examples:

This sort of offensive stereotyping was hardly limited to Captain Marvel during the 1940s:

None of this might have been worthy of comment during the 1940s. Indeed, racially diminishing Japanese people was a theme within US Government wartime propaganda. But, in respect of Captain Marvel, this is not material which dovetails with the release of a movie orientated towards a youthful audience. The scenario of parents, whose children might become enamoured of the character because of the motion picture, becoming understandably outraged if their children returned home from a comic shop with a title featuring such racist scenes seems low because of the significant cost of the hardcover collection.

But DC Comics would not have wanted mainstream media to have picked up the latest Shazam publication, and have had journalists diminishing the fun of the motion picture by exploring the history of the character, tainted by this expression of racism.