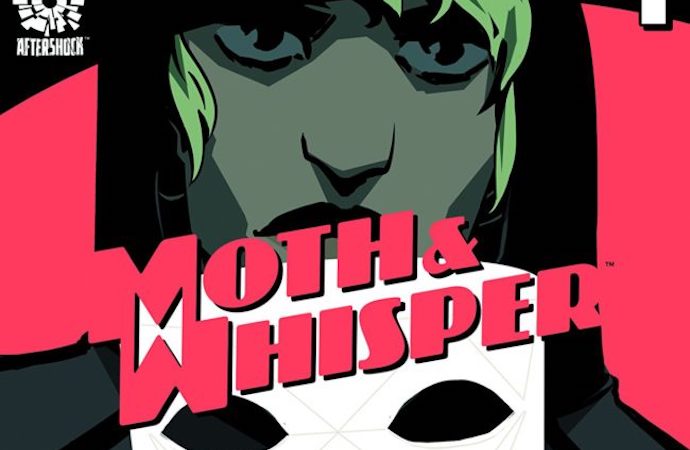 Like humour, a mystery is entirely dependent on timing. Moth & Whisper is a new comic from American publisher Aftershock Comics, with a mysterious and engaging name and an intriguing cover. The two title characters are mysterious thieves: The Moth is a criminal who can change disguises apparently instantaneously, and be anyone anywhere, while the Whisper is a burglar with an uncanny stealth.

The mystery extends itself into the first few pages of the comic. Writer Ted Anderson gives the reader a sleight-of-hand introduction to the two characters. The only information known about each of them is that one is male, one is female, both are for hire, each leave a stylised calling card, and both are flawless at their job.

Then, Mr Anderson pulls away the cloth and we become aware of his magician’s misdirection. The Moth and the Whisper are both missing. Further, they do not compete with each other in crime – in fact, they are married. The recent sightings of both the Moth and the Whisper have in actuality been one person, their gender-fluid child Niki, pretending to be both thieves at different times. He (using the male pronoun for convenience only) has taken refuge in a safe house and is on a mission to determine what has happened to his parents.

This is an excellent caper-turned-quest plot. But the mystery has been revealed far, far too soon. Mr Anderson could have deliciously drawn out the deception of who is who over multiple issues. Instead, the entire mystery, disappointingly is unraveled in the first issue. Magic requires good timing, and Mr Anderson has botched his timing entirely, in an effort to quickly engage his audience within the first issue.

Still, the question of what has happened to the Moth and the Whisper is enough to make us persevere and see if Mr Anderson has any more tricks up his sleeve.