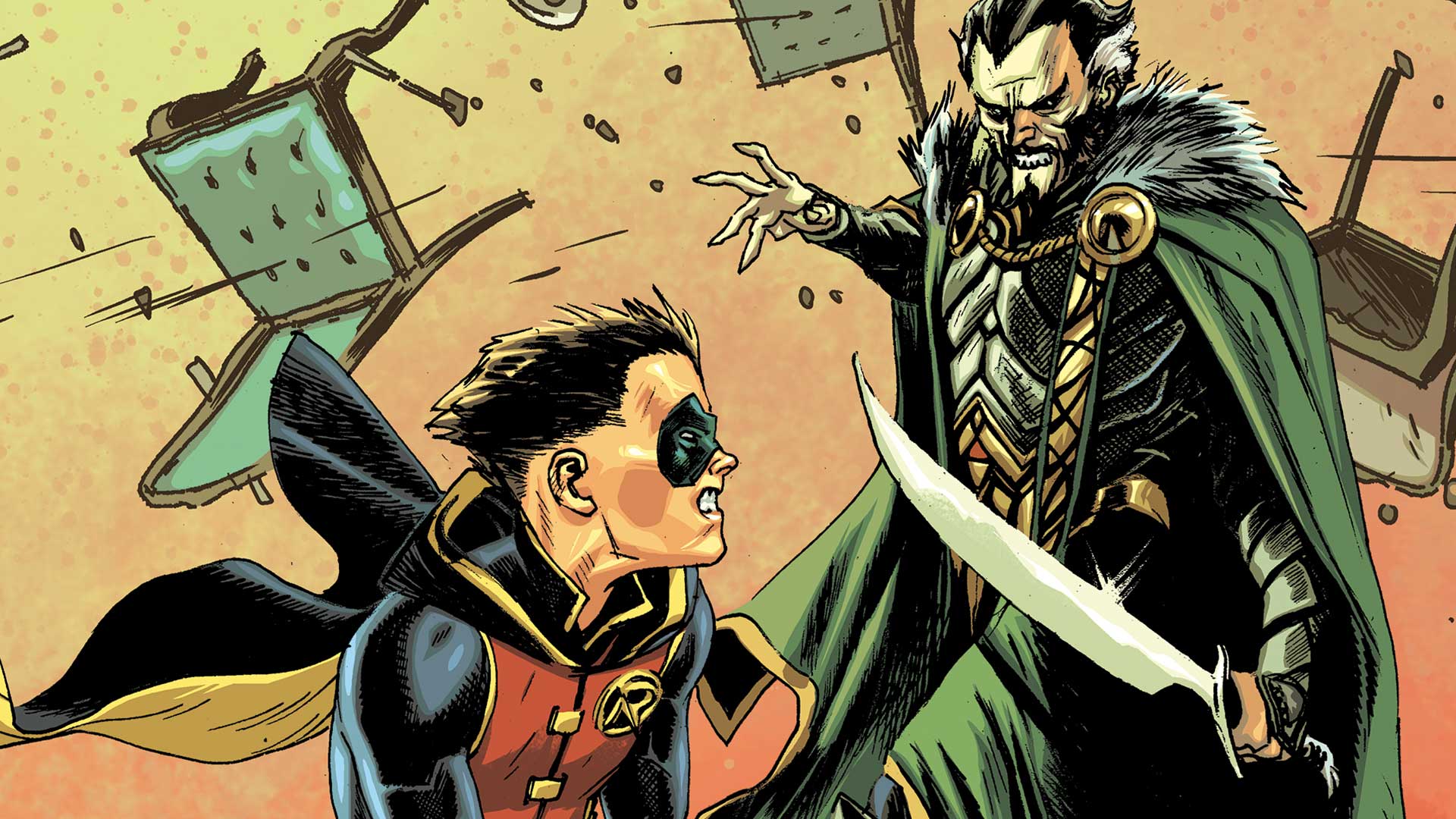 The plot of Batman – Prelude to the Wedding – Robin vs. Ra’s Al Ghul #1 will be jarring to readers who are not up to date on the Batman mythos. Notwithstanding the title, American publisher DC Comics’ premier character, the Batman, is notably absent from the pages. The comic instead revolves around the Batman’s biological son and current sidekick, Damian Wayne, who is currently getting fitted for ceremonial clothes that he will wear to a wedding. The nature of the wedding will be the big surprise for new readers: Batman’s alter ego is soon to tie the knot with Selina Kyle, the alter ego of The Batman’s on-and-off lover and enemy, Catwoman. (This relationship/marriage has been foreshadowed since the 1970s, to be discussed in an article we will write in the next few weeks.)

Damian and Selina interacting in their civilian identities, as soon-to-be stepmother and stepson, is easily the most interesting part of the comic. A lynchpin of the Batman mythos, Damian Wayne was raised and trained since birth by one of the Batman’s archenemies, the ecoterrorist Ra’s Al Ghul and his League of Assassins, and it shows in his characterization. Damian is impulsive and always struggled with keeping his emotions in check. He’s always had idealogical clashes with the Batman with regard to the proper (violent) treatment of criminals. Readers could therefore reasonably expect Damian to reject a career criminal as a new mother.

Selina Kyle (Catwoman) herself has always been characterized as strong-willed and, like her namesake, skittish and playfully dominant: it is a given that she will have trouble gelling with Damian. Amusingly enough, the comic plays with this expectation and shows that the two had things in common. They are able to work out an agreement to generally stay out of each other’s hair.

The other half of the comic deals with Ra’s Al Ghul, who has come to pay Damian a visit. Ra’s Al Ghul is an essentially immortal villain, of hazy Middle Eastern background, with pretensions towards dynasty. Perhaps curiously, the character is usually depicted as wishing for his nemesis, Batman, to marry into his family. With Bruce now marrying Selina instead of Ra’s daughter Talia, he finds Damian lacking purpose. Ra’s implies that Damian was originally meant to be his next body (an element of the character’s immortality which we need not go into here), but eventually allowed to live and serve as his connection to the Batman. That connection is now gone, and Ra’s sees Damian as a loose end.

Damian and Ra’s confrontation provides the obligatory superhero action scenes. Meant to satiate readers who enjoy all the superhero fisticuffs, it serves its purpose. But it is nothing that most readers have not seen numerous times before – from Damian’s barely suppressed air of operatic rage to Ra’s standard supervillain monologuing. The addition of a psychoactive drug-induced hallucination does little to elevate the scene above the common ruck of fight scenes inherent in the superhero genre.

Fortunately, Damian and Ra’s confrontation is not the focal point of the story, despite their names’ presence in the comic’s title. The comic is still a sidestory meant to drum up hype for Bruce and Selina’s forthcoming wedding. It succeeds in its task of fleshing out and addressing one of the effects of the marriage on the Batman franchise.