One of the most striking pages of one of DC Comics’ epic titles, “The Dark Knight Returns” (1986) by Frank Miller, features the character Batman, an ordinary human, aged, silver-haired and driven by sheer force of will (albeit in mechanised body armour), punching to a pulp the near-omnipotent character Superman. Batman’s brutal victory relies upon wits, cunning and impeccable planning. Fierce and grim, steeped in observations about the nature of the facades of media and politics, and the fundamental inability of the title character, Bruce Wayne, to stand by and watch violence descend upon his neighbours, the series is properly celebrated as paramount in the field of superhero comic book writing. In 2001-2002 DC Comics published a second instalment of the story, “The Dark Knight Strikes Again”. Entangled in DC Comics’ continuity and failing to tap into the libertarian rage which propelled the original series, this continuation of the tale was not a critical and commercial success. Climbing upwards from the pinnacle of a mountain is, after all, a miraculous feat.

The 1986 title established what has become a longstanding rivalry between the two main characters in DC Comics’ pantheon. The tone of the original title plainly recalls the defiance of Ahab in “Moby Dick” (Herman Melville, 1851): Ahab is described as a “a grand, ungodly, god-like man” with a “quenchless feud” against the godlike white whale. Ahab says to his crew, “Speak not to me of blasphemy, man; I’d strike the sun if it insulted me.” Indeed, Superman is essentially powered by solar radiation and in the crescendo of the story, the unmasked and very human Bruce Wayne, teeth set and eyes blazing, strikes Superman down in grim defiance of the character’s celestial power and authority.

This latest instalment, “The Master Race”, jointly written by Mr Miller and Brian Azzarello, appears to delve into the implications of Superman’s alien heritage. Superman is long-written as the son of a race with advanced technology from the exploded planet Krypton.

In 1997, writer and professor of geography and physiology Jared Diamond published a seminal book on the interaction of societies, entitled “Germs Guns and Steel”. The central tenet of the book is that Eurasian societies are dominant in wealth and power because of the inherent geography of the Eurasian mass, rather than any genetic disposition to advancement. One of the key learnings from the book is that when societies face off against each other, conflict is very likely, and history says that the society with the most advanced technology is likely to win that conflict.

Another academic, Samuel P Huntington, wrote a book at almost the same time, entitled “The Clash of Civilisations and the Remaking of World Order” (1996). This very influential book posited, amongst other things, that the borders between civilisations contain “fault lines”. These are geographical localities which are inherently unstable because of cultural differences between civilizational neighbours. Some of those fault lines were obvious at the time of writing – the US-Mexican border, the Philippines, and Australian-Indonesian relations around East Timor – while others have since sadly manifested (Somalia and the Ukraine).

In DC Comics’ fictional universe, there are civilisations which have technologies more advanced than those of the West, notably Atlantis (the home country of one of DC Comics’ properties, Aquaman) and Themiscryra (the home island of another property, Wonder Woman). The interaction between these small “countries” and their neighbours is not an issue that has been seriously explored, other than briefly by Greg Rucka during his term as writer of DC Comics’ “Wonder Woman” title (2006).

On several occasions DC Comics has allowed writers to consider the implications of interactions between the advanced civilisation of Krypton and earthlings. For the most part, and setting aside the altruism of Superman and the character’s cousin Supergirl, that interaction has gone very poorly indeed. Various Kryptonian conquerors have appeared over the years, most recently with the appearance of the Kryptonian god Rao in the DC Comics’ title “Justice League” (2015) by writer Bryan Hitch. In 1990, in the pages of DC Comics’ “Superman”, writer Jerry Ordway had a high technology device called the Eradicator endeavour to impose Kryptonian culture over the Earth. In the recent motion picture, “Man of Steel” (2013), Kryptonians endeavour to “terraform” the Earth and thereby destroy its indigenous inhabitants.

The title “The Master Race” hints at a forthcoming Kryptonian domination of the world. One of the long-standing elements of the Superman mythos is “The Bottled City of Kandor”. First appearing in DC Comics’ title Action Comics #242 in 1958, Kandor is a Kryptonian city which is the trophy of a malevolent alien called Brainiac. Brainiac has permanently shrunk the city and it is housed in a bottle-like dome. Kandor eventually comes into Superman’s care.

The first issue is overwhelmingly concerned with four subplots:

a. Commissioner Yindel and her pursuit of Batman, who has re-appeared out of nowhere and is busy beating up corrupt policemen. This ends up being Carrie Kelley, a key character from the first series, who upon her capture tells Yindel that “Bruce Wayne is dead”;

b. Wonder Woman besting a minotaur/centaur hybrid in the forests of the Amazon (and almost certainly the first on-panel depiction of breast feeding in mainstream comics); and

d. Another property, The Atom, ruminating upon his failed marriage, leading to an interaction with Lara over the desire of the inhabitants of the Bottled City of Kandor to regain their full size.

The story borrows again the segmented use of media footage housed in TV screens to propel the plot, a signature element of the original series. It also returns to the (now clichéd) inner monologue made prevalent by the 1986 title (a very different thing for Mr Azzarello, who is a master of snappy repartee and word play in dialogue).

The writers add a contemporary element: the first few pages depict teenagers texting each other, the text bubbles and text abbreviations forming a scattered narrative over the action.

It is a slow and bumpy start, which is surprising given Mr Azzarello’s and Mr Miller’s penchant for action. Missing is the magic of the 1986 series. Yindel unconvincingly complains to herself that she has become part of the problem of the establishment. The Atom makes dull puns to himself about his size-changing ability. Wonder Woman is proud and fierce, without much more than that. There is no sense of anger and righteousness, embodied by the characters’ torn complexities, no burning need for destructive catharsis.

We assume from the promotional material, the title, and the introduction of the concept of the inhabitants of Kandor wanting to regain their size that these Kryptonians will assert dominance over the world, and that, like in the first series, Batman will stand in their way.

We also assume that this first issue is intended to pressurise the plot, to bring the characters in on long arcing tangents so that they slowly swing around into confrontation. That sense of build-up is a strategy Mr Azzarello developed very well in his acclaimed work on “100 Bullets” (Vertigo Comics, 1999-2009), but it is ill-focussed in this first issue. None of the characters are incandescent in their emotional make-up and no sense of imminent collision is apparent.

Worse, the segmentation of the plot into an oddly placed back-up story featuring the Atom kills the building anticipation. This is a major stumble. The original 1986 title, with the first issue building up, the re-ignition of purpose and the plain need for a return to vigilantism, painted as the approach of both a metaphorical and literal thunderstorm, outdances this 2016 re-introduction to the story. Messrs Miller and Azzarello will have to work hard to recover the tension.

The next issue from DC Comics’ solicitations appear to focus on Carrie Kelley’s imprisonment and it will be interesting to see how that unfolds: 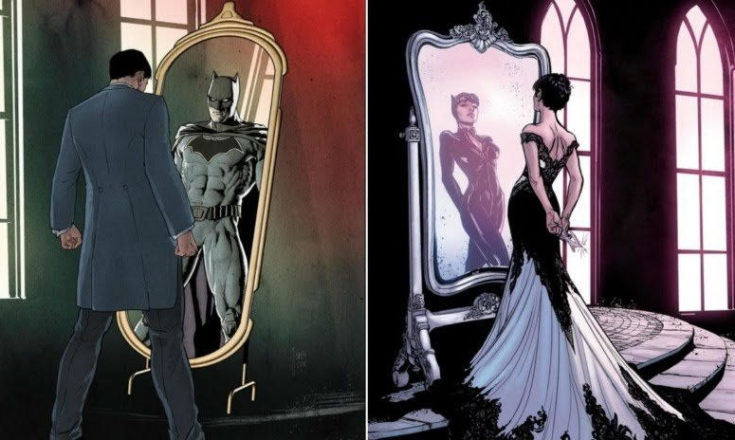 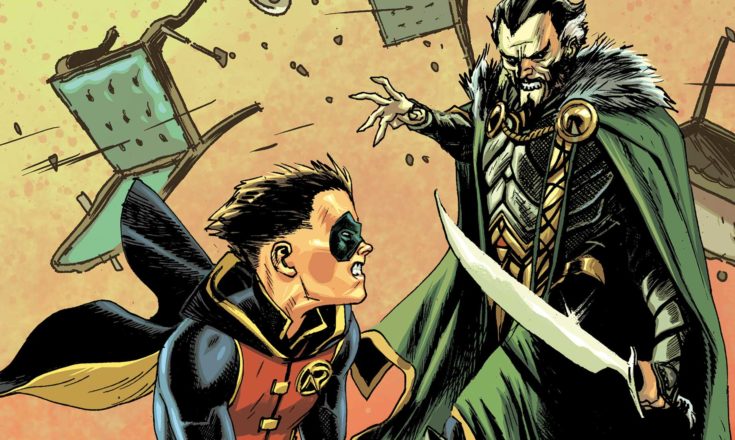 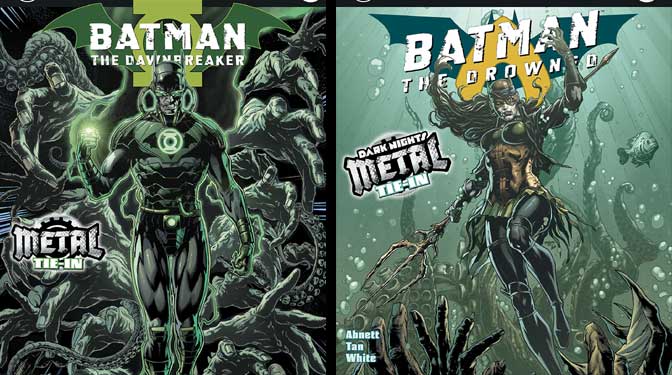