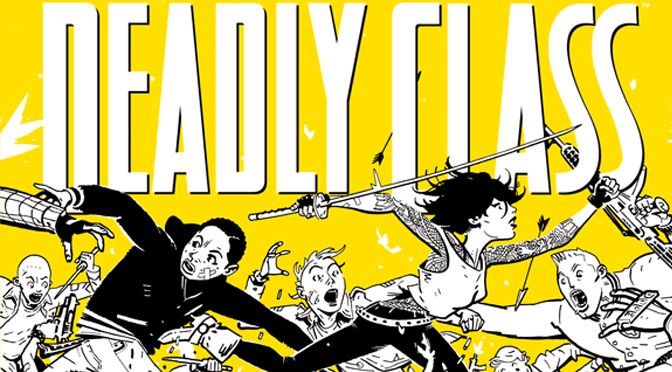 Marcus Lopez Arguello died in late 1987 – the exact date is unclear – aged only fifteen. Marcus’ friends, and we are amongst them, will properly assert that his death was a shameful waste.

In the freefall of violence in which Marcus spent most of his life, it is fair to say that his final years were exacerbated by Marcus. But although he certainly had his flaws, mostly Marcus suffered from bad luck. The creative product of one of the leading contemporary writers in American comic books, Rick Remender, Marcus’ parents were both killed by a falling suicide on the Golden Gate Bridge, the event occurring when Marcus was a young boy enjoying until that awful point an idyllic childhood.

Marcus however was resourceful and had mettle. He made a bomb out of needles which he stole and he used that to blow up the home, and Chester, too. Marcus tried to save his fellow captives in the sweatshop, but, thanks to Chester, they died in the fire. From there, Marcus was conscripted into a school for assassins and murderers, called the “Kings Dominion Atelier of the Deadly Arts”.

The students at Kings Dominion were ruthless killers, but the school itself had the bones and flesh of any high school’s social hierarchy. Marcus was an outsider, hated by the other children from his first day because of the blame ascribed to him for the torching of the orphanage. Kings Dominion is a dark echo of Professor Xavier’s school for mutants from Marvel Comics’ Uncanny X-Men titles. Instead of the superpowers and white-washed altruism of the Uncanny X-Men comics, we are instead exposed to the realities of high school – drugs, sex, bullying, the constant threat of violence. If the 1980s film “The Breakfast Club” was ostensibly a gathering of whitewashed 1980s teenage stereotypes. “Deadly Class” takes this further, featuring goths, punks, jocks, cheerleaders, gangsta-rappers, and damaged outsiders like Marcus, all constituting the “Reagan Youth” (the title of the first collected volume). Magnifying this is the awareness by both Marcus and the reader that the other students at the school are all the sons and daughters of cartel criminals, assassins, terrorists, death cultists, and worse, each with their own history of violence and horror.

The hideousness of high school manifests in different was in Deadly Class. There is the awful Viktor who fails to get an erection and so he spreads the rumour that he did not have sex with Petra because she had venereal disease. There is the threat of rape by Viktor of Shabnam as he is nude in the shower. The odious Shabnam reads Marcus’ diary and shares the content with principal to his own advantage. Teenagers are appalling subhumans who should indeed be imprisoned in a compound amusingly called “high school” until they mature. This title perfectly captures that sentiment.

Was Marcus actually the damaged outsider? Or was Marcus was a kind of 15 year old Everyman in terms of the worst imaginings of high school? Marcus obsessed about a girl, Saya, who was disinterested in him. When she did finally sleep with him, Marcus messed up his priorities by running out on her because he was late for his weekend job at a comic shop. Marcus then alienated both Saya and his best friend Willie by being insufferable and self-destructively high on bad drugs. Marcus had far too many drugs, and during one memorable comedown, Marcus shat his pants while at work. Marcus also got wasted at a party and slept with the ugliest and most horrid girl at school (Kelly, known as “The Troll”), and everyone knew it when she told him that she was pregnant. Marcus strung along the poor doomed Maria, who loved him, and ultimately died in trying to protect him. Missing Maria, not knowing that she is dead, Marcus tells Saya that he loves her, and spirals into weakness and depression when she says she has entered into a relationship with Marcus’ best friend, Willie.

From Deadly Class Volume 2: Kids of the Black Hole, in relation to Maria:

“Its next to impossible to deal with someone who is fighting the shit you just beat. Secretly, in the darkest pits of your self-centred subconscious…you’re just happy it’s not you anymore.”

Marcus did all the bad things, the wrong things.

“You can’t leave me Willie. You’re the best friend I ever had. I can’t do this without you, I can’t go on remembering you shooting yourself. You’re the only good person I’ve ever known. If you can make it out of this, you can have that back. We’ll never talk about any of it ever again. We’ll find some small village in Mexico where no one gives a fuck who we are. In one week, we’ll be sitting on the beach, drinking beer in the sun. In one year we’ll have completely new lives. In ten years we’ll have families and everything that’s happened here will be forgotten. Come with me. Things will get better.”

And to his friend Billy, in the same volume:

Marcus: “You know what? I did learn something this year. I learned who my real friends are. You know, through all the shit, you never turned your back on me, Billy. I could always trust you… I never told you how much I appreciated you, man.”

Billy: “What are you doing?”

Marcus: “Come on. Give it up. [hugs Billy] You know what else I learned? Cynicism is the refuge of a coward. Sincerity, man, that shit is hard.”

By reason of his experiences, Marcus had a decidedly nihilistic view of life. Marcus for a long time could not see the point of it all. This manifested in those self-destructive ways: the drug use, the almost suicidal, bloody-minded confrontations with those who then were hell-bent on his destruction, the recidivist defiance of authority (including that of Master Lin, the school’s principal).

Yet towards the very end, the prey in a hunt organised by Master Lin, Marcus achieved a degree of clarity. Being lonely and without friends, Marcus realised, as he contemplated a return to homelessness in flight from the school and his hunters, was not what he wanted in life. Facing the plain threat of death, friends and a future with family were within vision. Upon his reconciliation with Willie, the two planned to hide on a beach in Mexico, raise children and forget about their brutal experiences in their lives and at Kings Dominion. Marcus also realised that Billy was a friend and that friends were to be treasured. Through being an inherently good person, faced with stark and far-too-adult choices, Marcus overcame his impulse to self-destruction and willed to thrive.

From there, Marcus’ death was unexpected. Given the odds staked against him, being pursued by Viktor, the vicious son of a KGB assassin through a derelict house, with the vast majority of the school otherwise chasing him for the inhuman purpose of scoring points in the exercise of killing the “rats”, this should have been unsurprising. Marcus stayed alive during the hunt through a combination of fortuitous coincidence and adrenaline. There was an expectation that this would continue: that in evading his hunters for the requisite week, the reader hoped that Marcus would be admitted into the fold at the assassins’ school as a fully-fledged legacy. Plotting vengeance upon Victor for Willie’s death, using that as a driver to stay alive, the possibility of Marcus outwitting the brutal Russian, all rested on the horizon. But as Marcus ran out the door of the tenement block, he was impaled on Saya’s sword.

The irony of being caught by the girl he had been chasing is an easy conclusion. But perhaps Marcus’ death was less poetic than that. Surrounded by bad people and with Darwinistic forces entirely at play, Marcus, with his weaknesses and his sentiment, and at his core, a good heart in a good kid, was simply not the fittest. He could not survive against those who were stronger, lacking in sentiment, black-hearted.

Mr Remender spent just under two years making us like, hate, laugh at and laugh with, deeply empathise with Marcus. That intimacy was concluded by the tip of a blade. By way of consolation Mr Remender gave us Marcus’ final thoughts. This was a dream sequence, where Marcus is walking with his parents and they chose another way, by a lake with swans, avoiding the place where the jumper would kill his mother and father.

This echoes an earlier scene. Maria has taken Marcus to a lake and the sun on the horizon has cast a white swan on the water in gold. Marcus of course strikes a pose and stalks away from the twinned beauty, the iridescence of the swan and the warmth of Maria’s smile. But it is idyllic and perhaps Marcus’ dying subconscious fuses the memory of his parents’ love with the beauty of the swan.

It is a small and golden happy ending for both us and for Marcus, an illusion of happiness and better possibilities in the forefront of his mind as Marcus passed away. But notwithstanding this, Marcus’ death makes us sick to our core. We mourn the loss of our flawed friend.

Surprisingly, Deadly Class, in our view the best American comic book in the market and to be made into a television production, continues, despite the murder of the title’s narrator. The deadly hunters will re-group at the school, and a new freshman class will arrive. A new killing of the “rats” will occur, and this time we know it is coming. As this series is set in the 1980s, it may even be that the title will march in, and we see the characters in their future, grown up and realising their potentials but within a contemporary framework – say, Victor as an aide to Vladimir Putin, Saya as the leader of her Yakuza clan, the dreadful Shabnam rotting in a cell, Marcus’ last and subtly psychotic girlfriend Petra quietly killing people with poisons and protected for her crimes by a multinational pharmaceutical company? Who knows what futures Mr Remender has planned for his motley cast?

But at some stage, at some time, we hope that Marcus will not be forgotten.

[Our review of volume 6 of Deadly Class dated 31 January 2018 can be found by way of this link: http://www.worldcomicbookreview.com/index.php/2018/01/30/please-shoot-viktor-deadly-class-volume-6-review/ ]