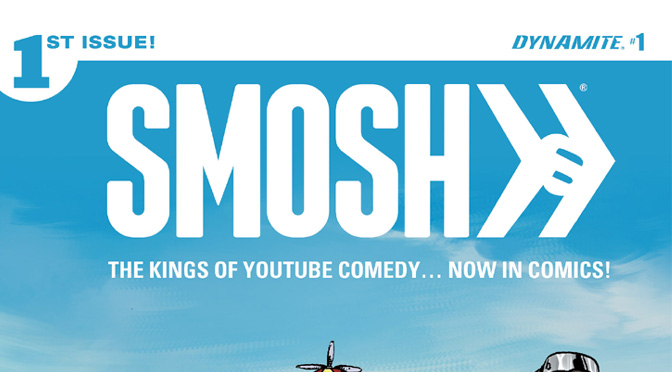 “SMOSH” is a comedic comic book series published by Dynamite Entertainment, based on the same-named web-based comedy channel from Youtube stars Ian Hecox and Anthony Padilla. The duo only serve as co-developers of the story alongside Dynamite editor Rich Young, with zombie anthology FUBAR’s Michael McDermott and online webcomic JL8’s Yale Stewart on writing chores.

The stories themselves are based on recurring SMOSH comedy skits that Messrs Hecox and Padilla conceptualized and starred in, which in a way justifies the use of the SMOSH brand even without the active participation of its creators.

Dynamite Entertainment’s decision to publish an SMOSH comic book is a commercially sound one – Messrs Hecox and Padilla’s network of Youtube channels boasts of more than 36 million combined subscribers. It also helps that the bulk of SMOSH’s audiences consist of that very lucrative teen/tween demographic.

However, the execution palls as neither of the two writers commissioned seem capable of translating SMOSH’s brand of comedy into comic book form.

The first and probably main story in the comic, “The Super Virgin Squad”, is based on a recurring SMOSH sketch about a trio of men with ridiculously impractical powers, which they believe to be the result of abstinence. The members consist of Billy, who has the power to hover a few inches above the ground; Stevie, who has the ability to heal using platonic love; and Paulie, who has the mightiest jaws on earth and can chew through anything.

The original Youtube video for “Super Virgin Squad” is a short skit that spoofs the theme song for the 90s Teenage Mutant Ninja Turtles cartoon. It is the kind of skit that is designed to be cheesy and would be grating where it not for its short runtime (clocking in at a mere 2 minutes, 40 seconds.)

The comic takes that premise and tries to craft an actual story around it, using a flimsy story about one of the Squad members’ mother going on a date with someone she met through the Internet, and the Squad trying to stop the date from ever happening.

The jokes all boil down to the boys being averse to any form of sexuality, which works in video form because SMOSH’s main currency is crude slapstick comedy. It falls completely flat in a comic book, where the timing required to make slapstick work does not always translate very well.

Another excellent example of Mr McDermott’s failure to transpose SMOSH’s brand of comedy to comic book form is the decision to give Paulie a substantial amount of lines, even though the character’s speech is very difficult to understand due to his metal braces; the original video gives a nod to this problem by providing subtitles everytime Paulie speaks. In the comic, the reader is left alone to struggle interpreting what the character is saying. It is not impossible, but it takes effort and is an unnecessary distraction.

The second story, “That Damn Neighbor”. is even more disappointing. In part because it was written by the talented Yale Stewart, whose JL8 comic provides a Calvin & Hobbes-inspired gentle depth to 8-year old versions of the Justice League, and also because the writing itself is worse than Mr McDermott’s attempt at the “Super Virgin Squad”.

“That Damn Neighbor” is based on a recurring skit about a guy and his neighbor, who seems to have the ability to teleport. The comic book has the guy challenging the neighbor to a car race, only to lose after the neighbor’s car teleports straight to the finish line. The original video is characterised by the cheesy teleportation effect done through quick camera cuts. In comic book form, it just appears as a poorly structured series of panels. Another appeal of the video is Mr Hecox’s over the top facial expressions and delivery, which is another thing that does not work too well in a series of comic panels.

Of course, given how loyal SMOSH’s fans are, it would not be surprising if SMOSH #1 becomes a commercial success, which should make Dynamite Entertainment happy and ensure the series’ continuation. In the event that it does not, perhaps the publisher should let Messrs Hecox and Padilla write the stories themselves, as having the creators craft the story may allow for a more faithful translation of their brand of comedy. At the very least, they could create new stories that are specifically written for the comic book medium.