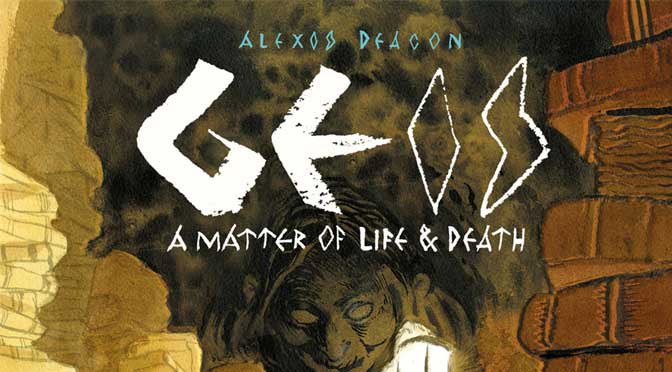 Geis: A Matter of Life and Death
Nobrow, 2016
Writer:Alexis Deacon

On the face of it, “Geis: A Matter of Life and Death” looks like a teenage fantasy comic, with its cover of a curious and very young blonde girl in blue sackcloth wielding an old fashioned lantern, prowling around a darkened library. Instead, “Geis” is a sinister horror story with curiously feminist undertones.

When Matarka, the leader of a city known only as the Capital, dies, her successor is to be chosen in accordance with her enchanted will. Many potential candidates are summoned into a hall where the dead chieftain’s body lies in state. Each of the forty or so assembled people, ranging from the leader of the army to apparently ordinary and normal citizens, sign a document whereby they each agree to abide by the outcome of the selection process.

But in doing so, each of them bind themselves to the will of a ghoulish sorceress named Niope. An evil and powerful witch, Niope , was apparently invited by Matarka to determine the exercise of succession. But Niope introduces diabolical rules into the contest. Using her magic, Niope scatters the assembly across the kingdom, with the message that the first to return shall rule.

From there, writer Alexis Deacon begins to flesh out the individual characters of story. These include:

a. a lofty and intimidating Chief Justice;
b. a bearish and aggressive man, named Torax, who is the leader of the army;
c. Eloise, a “village witch”, as disparagingly described by the sorceress;
d. a fire-headed nobleman named Ben;
e. Artur, a ludicrously self-absorbed noble, who possesses a comically oversized head and has the bearing of an eccentric
f. another nobleman, Nelson. Nelson pauses to consider his actions ominously before a hanged man at a crossroads before walking away from the coming confrontation;
g. the Lord Chancellor, who is early in the story killed and transformed by the sorceress into a voiceless ghoul;
h. Torax’s younger brother, a councilman named Nemas, resourceful and desperate to win. But as the truth is revealed, Nemas becomes motivated by a rising sense of panic and self-preservation, and resorts to attempts at violence.

The hero of the story is a nameless girl described as the “kite lord’s daughter”. She is utterly baffled as to why she was invited to participate in the selection process and suspects her parents are trying to expel her from their house. As it evolves, the kite lord’s daughter is the first to return to the hall. When Nemas returns only to learn from the crone that he is second, he sees the kite lord’s daughter distraught. She has been told, as he is then told, by Niope that those who do not return before the sunrise are doomed. “We gave ourselves to her,” she grimly says.

Further, those who give up and refuse to participate in the process will either die or be transformed into shambling hulks, servants to the sorceress. The Lord Chancellor is the first victim of this.

The far-flung cast face various challenges and perils, invoking quicksand, duelling giant beasts, and a ferocious pack of wolves. The kite lord’s daughter faces the imminent peril when Nemas decides that her death ensures that he will live. He attacks her with a knife and then a broadsword. She responds by threatening him with a small crossbow she has hidden in her dress. Nemas retreats, seeking assistance from the city’s criminal underworld in the form of poisons. As for the kite lord’s daughter, she runs to her parent’s household and obtains the assistance of an armed servant and her father’s librarian in order to learn about death magic.

In the meantime, a mystical fight erupts between Niope the ghoul and the Eloise witch. The sorceress defeats the witch easily. Niope uses her magic to quite horribly remove Eloise’s tongue so as to remove her ability to cast spells, and Eloise is mauled by wolves. Only quick intervention by, first, Nelson, and then Artur and the kite lord’s daughter saves Eloise from death, but even so, she is very seriously injured.

The closing scenes have the kite lord’s daughter and her companions aloft on a large kite. She displays heroism and leadership skills by coordinating the protagonists in the fight. Morning sunlight momentarily splashes across the kite lord’s daughter’s otherwise shadowed face. A full third of her skin and hair, and her left eye, are crisped and blackened, as the sorceress’ curse upon those who are late into the citadel begins to manifest. The survivors of the quest drag themselves into the hall in disarray, a disorderly and terrified retreat. Remarkably, the kite lord’s daughter chooses to save the injured Nemas from destruction by dragging his seriously wounded body through the door immediately before the sun strikes it.

The conclusion to this first volume reads like a war epic, where at the conclusion of the battle the protagonists of the tale are thoroughly routed, demoralised, and in some cases barely alive. There is no saccharine to this fantasy story, and the cover to the title is in that regard misleading.

It is interesting that Mr Deacon decided to place women at the centre of his tale. The hero of the text is a young girl. The deceased leader of the kingdom, Matarka, is an old woman. The crone antagonist Niope is a powerful female magic wielder. The only other person with any ability to fend off the sorceress is the female witch Eloise. The chief lawmaker is a woman. On the other hand, aside from Nelson, the male characters are deeply flawed, depicted at best as a bumbling eccentric, and at worst as a warlike brute who cannot control his temper, or as a calculating murderer. It is counterintuitive that a fantasy epic, set in barely post-medieval surrounds, would revolve around empowered female characters. We assume that, save for the magical elements, the story takes place in the fantasy equivalent of the pre-gunpowder, late-stage feudal 1500s. With very few exceptions, women had little influence in societies of the time both in the West and elsewhere. The prominence of women, and their influence in the fantasy society of the story, is hard to ignore.

Two more volumes of “Geis” are promised by Mr Deacon. We look forward to them.