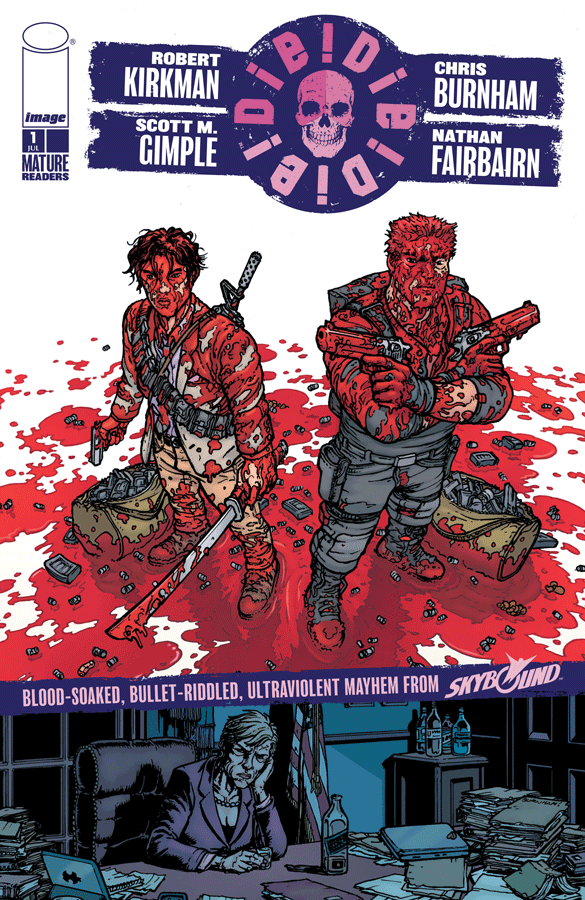 In the age of a Trump presidency, it was perhaps inevitable that the Deep State would get its own comic book. What a shame it was this one.

Die! Die! Die! #1 has silly promotional copy which gives readers a taste of what to expect… and the flavour is cheap cheese splattered with ketchup.

DIE!DIE!DIE! promises to be a blood-soaked, no holds barred, action-packed, irreverent story that fans won’t be able to rip their eyes from. We live in an evil world where evil people do evil stuff all the time and DIE!DIE!DIE! lifts the veil on a secret cabal within the United States government that influences world matters through targeted assassination. The world around us is manipulated right under our noses, mostly for the better… but sometimes for individual gain, and sometimes for the fun of it.

“We cooked up all sorts of great action sequences and horrific gross-out gags for this book,” said Burnham. “Maybe we should have called it Puke!Puke!Puke!”

So if you’re hurting people, somehow making the world worse than it already is, or even just standing in the way of something good happening… someone could right now be giving the order for you to… DIE!DIE!DIE!

There is an interesting Butterfly Effect sequence where a man is given a winning ticket at the greyhound races, which eventually results in the framed suicide of a UK politician who has been revealed as a pedophile. The idea of a government agency leaning on the roulette wheel is an appealing one and of itself would have supported an extremely compelling set of vignettes.

The gift of the winning ticket however leads the reader to a car chase and shoot-out. The conclusion to this is that our protagonist’s nose is severed by a large and sharp hunting knife. The dialogue in the lead-up to the removal of the man’s nose, in contrast, requires a very large but dull cheese knife:

~ [Paul is knocked of his motorcycle by a Hummer and backflips through the air] “Not cool, guys!”
~ [Paul gracefully lands on the hood of the speeding Hummer ] “Bulletproof? Nice.”
~ [Paul starts shooting the window] “But how bulletproof?”
~ [Hummer crashes into the stone wall of a bridge and Paul is thrown into the river. Paul crawls out, wet.] “Okay… fair play. Anything goes… all good… I’m going to kill these fuckers do hard.”
~ [Paul is shot at and scrambles for cover] “Some talking would be nice… dicks. It’d be nice to know who you are before you die.”

It is schlock bravado. It is as if someone had taken Marvel Comics’ notoriously mouthy superhero Spider-Man, and given him a Glock, an enormous ego, and a penchant for calling his adversaries “dicks”. The chatter is irritating and entirely unrealistic for a man who should be gasping for breath, who should have broken an ankle in landing on the Hummer’s hood, who should be sounding a little desperate because he is hopelessly outgunned.

The nascent plot is evolving into a rescue caper. Paul, the character who has his nose removed, is chained up in an undisclosed location and has been put up for auction for purchase by unnamed bad guys. As it evolves, Paul has two brothers: one who seems to have the resources and style of DC Comics’ billionaire crime fighter Batman but with a garage full of large guns, and the other, named John, is a survivalist. Both are no doubt going to cross paths in their efforts to save their brother. The men all appear to be triplets, and all deal in death. It would not be so exciting if Paul’s brothers were a dentist and a baker, but perhaps it would be more original.

By happenstance we read this issue immediately before reading Warren Ellis’ second volume of Injection. Injection has similar, ultra-violent themes to Die! Die! Die! But Injection, like many of Mr Ellis’ works, is clever in an off-beat way, and laced with laugh-out-loud laconic humour. The difference is stark.