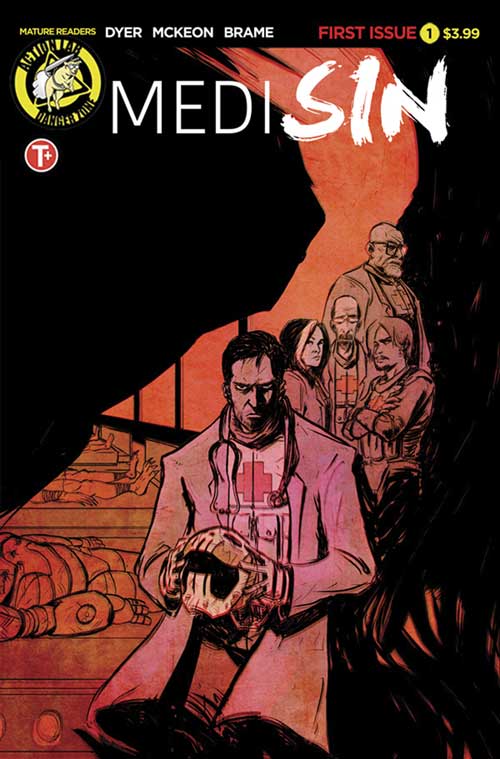 Comic books that delve into the often catastrophic consequences of massive super hero and villain brawls are not new. Iconic comic book titles such as Garth Ennis’ “The Boys”, Warren Ellis’ “The Authority”, and Marvel Comics’ “Damage Control” have all considered what happens to a cityscape and its civilian population when people with superpowers fight each other. Action Lab Entertainment’s new comic book series “Medisin” addresses a very oblique factor arising from this sort of violence: who handles the super villains’ healthcare?

“Medisin”’s first issue wastes no time in setting up the premise. First, readers are treated to a hyper-violent rumble between a group of superheroes and supervillains. There is particular focus on a one-sided fight between a Superman-analogue called “The Guardian” and a villain called the “Quick Thinker.” The villain is brutalized and dies as a result of massive injuries.

The fight portrays the superheroes in “Medisin” as every bit as cruel as the villains they fight against. A speedster reminiscent of DC Comics’ character “The Flash” actually chases down injured and dying opponents. The comic shows a bit of camaraderie between the villains, and paints them in a tragic light. Critical to the premise of the title, the Quick Thinker is portrayed as succumbing to his injuries, unable to get medical help by virtue of being a super villain.

The comic then skips forward 27 years. It introduces the MEDICs (an acronym that stands for “Mobile Emergency Doctor Intervention Crew.”) This is an emergency response unit consisting of highly skilled medical professionals and first responders. These people were either recruited, or were blackmailed by an evil mastermind named “Malady” into providing regular healthcare and battlefield triage to the latest incarnation of the supervillain team featured in the opening scene (grandiosely dubbed “the Lords of Discord”.) It is a unique premise.

The comic continues by following the MEDICs into the field, where readers are introduced to several more villains, as well as to the repercussions should a member of the crew choose to abscond his or her duties. The issue also takes the time to introduce a protagonist, a member of MEDICs named “Ethan,” who is actually the grandson of Quick Thinker and possesses the same powers as his grandfather, namely hyper intelligence. In Ethan’s case, this ability proves very useful in the field. The comic ends on an action-packed cliffhanger, as the MEDICs’ command center is accidentally damaged in a fight between two powerful superhumans.

Within a single issue, the comic succeeds in introducing the world and its characters, and building several subplots that should hopefully come together later on as the series gathers pace.

“Medisin” stands above the common ruck of jaded, hyper-realistic takes on the superhero genre. One of the reasons for this immediate success is that the title does not linger on the violence and gore any more than what is needed to tell the story. The creators are not trying to use shock value to engage readers. There are places where the exposition gets awkward and too wordy, but these are minor annoyances that do not interfere with the quality of the story.