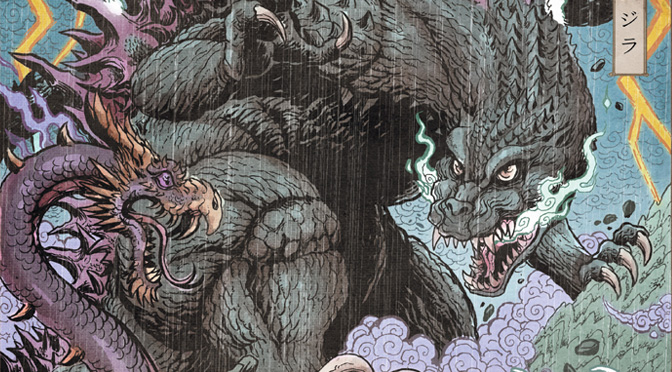 The globally famous, fictional giant reptilian monster “Godzilla” was originally introduced in a 1954 Japanese motion picture. The movie was a way of addressing the consequences of nuclear warfare, a concept all too real to Japan. Over the course of successive movies, the Godzilla character took on a less serious tone. The monster proved surprisingly popular, and became an incidental ally to humanity against other giant monsters.

“Godzilla: Rage Across Time”, is a new miniseries published by American publisher IDW Publishing. The title finds a healthy balance between the two vastly different portrayals of Godzilla. The theme of “scientific progress gone too far” and allusions to nuclear weapons are no longer visible, as the giant monster is portrayed more as an amoral force of nature – akin to an earthquake perhaps – rather than as a benign protector.

In “Godzilla: Rage Across Time”, Godzilla is described as an ancient creature older than civilization, and that it played a significant role in many of the important events in mankind’s recorded history. Like a kaiju version of Geoffrey Chaucer’s “Canterbury Tales”, each issue tells a different yarn, but all of them are framed within an investigation being done by historian/archaeologist Dr. Benjamin Thompson and his assistant Nikki Kasumi.

This first issue is written by Jeremy Robinson, whose kaiju comic “Project Nemesis” we have reviewed favourably in the past. While “Godzilla: Rage Across Time” is a kaiju story, the take is less contemporary, a different approach from Mr Robinson.

The story flashes back to feudal Japan in 1274, in the middle of an invasion by an overwhelmingly large fleet of Mongol ships led by Kublai Khan. Retellings of the event state that the Mongol fleet encountered heavy resistance and were eventually sunk by a typhoon, which many Japanese at the time considered divine and sent by either the thunder god Raijin or the wind god Fujin. Mr Robinson offers an alternate take on the events.

In “Godzilla: Rage Across Time” #1, Kublai Khan’s fleet was invincible because they have two ancient monsters on their side, named Megalon and Gigan (both of which are based on monsters that Godzilla have faced in the movies.) The meat of the story concerns a kunoichi and a samurai, whose clans have been at war for generations, joining together in order to awaken their own monster, the mythological beast Yamata no Orochi. “Orochi” means “serpent” in Japanese, and “Yamata” is a reference to its eight branches. This is derived entirely from Japanese mythology, from the epic “Kojiki”, published in 680. In using this much older dragon as the champion of the Japanese against the Mongols, Mr Robinson slightly played with expectations by not having Godzilla be the Japanese representative.

In short order, however, Yamata no Orochi is slain by Godzilla, which appeared and behaved absent of any logic. The two rival warriors decide to work together in order to divert Godzilla’s attention towards the Mongol invaders and their monsters. Suffice it to say, they are successful. The story closes with Dr Thompson positing that historians eventually attributed Godzilla’s actions to a typhoon because the truth defies reason.

“Godzilla: Rage Across Time” gives its authors a significant amount of creative freedom. Mr Robinson’s concept could lead to interesting places in respect of the attribution of historical disasters.

But then we have issue #2 of the series. Written by Chris Mowry & Kahlil Schweitzer, the story drops Godzilla in the middle of a heavy-handed story about the Olympian god Zeus, whose pantheon has grown indolent and arrogant after being spoiled by humanity’s worship. It is a story that struggles to find a purpose within the Godzilla mythos. How could Mount Olympus, a landmark in Greek mythology, be a target for the giant kaiju? The resolution is also ridiculous, with Zeus being drained of his powers after fighting Godzilla, being reduced to an old, emaciated wanderer that tragically perished as one of the victims in the eruption of Mount Vesuvius in 79 AD.

The portrayal of fantastical elements like the Olympian gods conflicts with “Godzilla: Rage Across Time”’s apparent intention of tying Godzilla into historical events, especially when it is told through the perspective of an archaeologist/historian like Dr Benjamin Thompson.

We are only two issues into the mini-series, and IDW Publishing has announced #4 and #5 will be published soon. The discrepancy between the quality of the first two issues suggest keeping expectations low in order to mitigate disappointment.

The Eleven Most Fearsome Giant Monsters in Comic Books