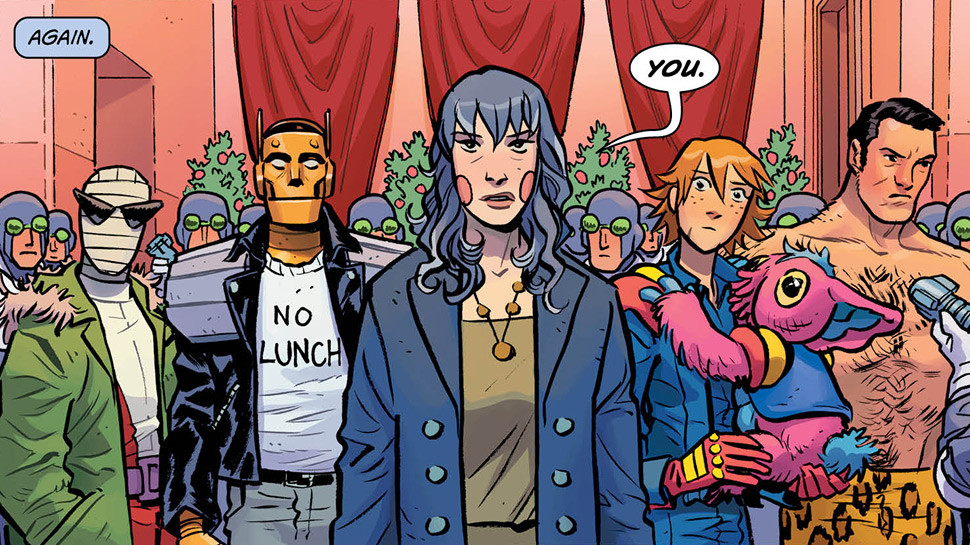 In his first, excellent title The Umbrella Academy, writer Gerard Way pays homage to Scottish writer Grant Morrison by naming a fictional park and site of a showdown after Mr Morrison. This title seems to be an extension of that adoration of Mr Morrison’s quirky style.

The Doom Patrol are an oddball collection of superhero properties which have in recent decades become a vehicle for bizarre, surreal stories. This issue is no exception. It is ostensibly about a character who becomes god of superheroes after killing his predecessor with a sentient brick. The entire plot is actually a television show designed to keep entertained the Eonymous, a group of six children, called “television gods”, in a virtual reality rigs which look vaguely like Marvel Comics’ Eternals. There is a wedding involving a team member Elasti-Girl. The villain of the piece dies when he shoots a gun at his bride for unknown reasons, and the bullet bounces out of her rubbery skin and back into his chest. The villain himself consists of a white outline and a red cape: over his chest are the words “Withheld due to Copyright” (some irony there given one of the team members is Flex Mentallo, a character which was the subject of an intellectual property dispute some years ago). There is a cacophony of activity otherwise.

But the issue is otherwise a nod – or perhaps a head butt – to the comics industry and its readers. Here is some text:

“Able to slide anywhere, I found this place – final heaven – nearly outside of all things save one. And inside Final Heaven, I found Retconn – an unassuming corporation operated by undying hacks who had access to any reality, who were capable of hijacking fragments from their crystalline state and creating composite new realities… hyper realities.”

“Fan fiction. There’s tons of this stuff – it’s really good, actually. People are very attached to an older version of you and especially interested in your relationship with Jane… your parents were most likely teenagers huddled behind their keyboards, or odd man-children obsessed with the stories that shaped their youth. A mix of nostalgia and an inability to let go of the past.”

And there is the writer, Mr Way, taking a deeply laconic shot at his readership.

Most of the content of this issue is a nonsense, which is the point of surrealism. But in being ironic to the point of counter-pretension, Mr Way seems to have also inadvertently catered to one of the biggest complaints about American superhero comics: utter inaccessibility. And those two words describe this comic.