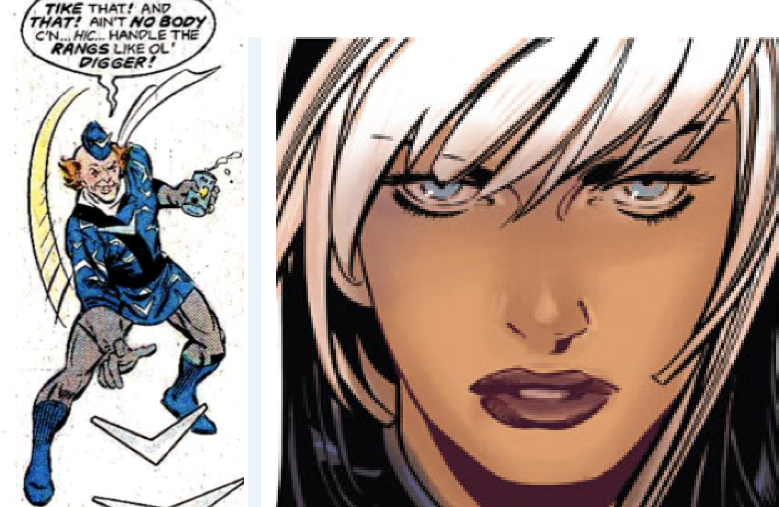 Tempus is a young woman from the Gold Coast in Queensland, Australia. The character is depicted as having the ability to manipulate time. This is one of the very few superhero characters in American comic books which is written as something other than an Australian stereotype. The character has a barely discernible accent and the character’s superhero indicia is not “Australian-themed”.

Bishop however displays no qualities of being Australian: the character uses no Australian vernacular speech and, perhaps because Bishop is depicted as being from the future, has no obvious family or community association with Australia. (Bishop’s sister, named “Shard”, is similarly bereft of Australian characteristics or Aboriginality.)

But these two characters are the exception to the rule of adopting blunt stereotypes. Below is a very short list of other Australian superheroes and supervillains, where the primary characterisation is cliche.

Created by John Broome and Carmine Infantino, this villainous thief deploys, unsurprisingly, boomerangs as weapons. The creators can be forgiven for their day and age: the character was first seen in 1960. But since then Captain Boomerang has been the vehicle over the years for some odd and novel purportedly Australian vernacular:

In the pages of “The Flash”, Captain Boomerang originally did not have an Australian accent. This came along later, as a cascade.

b. Pyro (Marvel Comics). This villainous mutant, a longstanding opponent of US publisher Marvel Comics’ mutant superheroes called the X-Men, can control fire. Created in 1981 by John Byrne, the character has a broad, but not too exaggerated, Australian accent. Sometimes however Pyro is written with a decidedly English plum in his mouth:

(“Wot” is not very Australian: it sounds very upperclass English.)

Created in 1977, this character is further evidence of the trap of the stereotype. A Tasmanian devil is a carnivorous marsupial found exclusively, as the name plainly suggests, on the island of Tasmania. In the team-up with another DC Comics hero named Green Arrow, depicted below, the editor provides a helpful translation of Tasmanian Devil’s Australian 1950s slang.

This character first appeared in Uncanny X-Men #229 (1988). Described by creator Chris Claremont as an Aboriginal man located on a hilltop outside a remote and abandoned Australian outback town, Gateway is a character entirely devoid of dialogue. This entirely avoids character development, and reflects the character’s function solely as a vehicle from the Outback to remote places.

What are we seeing when American writers have Australian characters use this sort of arcane language? The Australian English accent comes in three generalised forms: broad, standard, and cultivated. Broad accents are perceived as either working class or rural. Below is an extract from DialectBlog:

“A 1997 study in the Australian Journal of Linguistics** offered more precise parameters. The researchers started by making impressionistic judgements about a large number of recorded Australian subjects, placing them into the Broad, General and Cultivated categories. They then analyzed the vowel sounds of these speakers to specify which features correspond to each type of accent.

The results are not terribly surprising. The further on the Broad end of the spectrum that an accent lies, the more markedly, well, “Australian” the features of said accent. Here are the biggest factors:

–The diphthong in “kite,” “ride,” “mine” etc. The more Broad the accent gets, the more this moves toward the diphthong in words like “choice” (i.e. retracted and raised). Hence a Cultivated Australian speaker might pronounce “buy” somewhat close to an RP or General American speaker (i.e. IPA baɪ). A Broad speaker, on the other hand, might pronounce it closer to American “boy” (i.e. IPA bɒe).

–The vowel in “mouth,” “loud” and “out,” etc. The more Broad the accent, the more the first part of this diphthong moves toward the “e” in “dress.” So a Cultivated speaker might have a diphthong closer to GenAm or RP (i.e. IPA aʊ), while a Broad speaker might pronounce it closer to an “eh-aw” sound (i.e. IPA ɛɔ).

….In this way, Australia exhibits a paradox similar to another of the commonwealth’s largest nations, Canada. Both countries have populations distributed over vast geographical distances, yet have startlingly few regional dialects.”

Captain Boomerang’s accent is a broad Australian English accent. So is Pyro’s accent, and so is the accent of the Tasmanian Devil. Further, all three characters use the sort of flamboyant language which is recognisable to Australians who grew up in the 1950s. Few are the Australians who now use the word “cobber” other than as satire: most urban post-millenarials would not recognise the word.

The reason for this sort of character development – use of the broad Australian English accent, and use of Australian indicia in superpowers, codenames, and costumes – is indeed creative laziness. Tasked to create an Australian character, there must be a temptation by a creator to look to the stereotypes which include over-the-top colourful slang. We note that this type of creative shortcut is hardly unique to Australian characters. When creating the superhero team “Alpha Flight” in 1979 for American publisher Marvel Comics, writer John Byrne did nothing but populate the cast with Canadian stereotypes, including the introduction of a small, tough midget called “Puck”, in a ridiculously clumsy nod to the Canadian national sport.

Resorting to silly stereotyping might be a creative safety net for American writers, in circumstances where they know nothing about Australia but have been deployed to introduce an Australian character. But the scenario is worse when an Australian writer on an Australian comic indulges in the same exercise.

This occurs in “Southern Squadron” an Australian title which was first published in 1988.

UK newspaper The Spectator describes the title as “a superhero sitcom starring a Melbourne bogan, a Sydney metrosexual, a tough feminist and Croatian werewolf”.

Sadly, the werewolf’s superhero code name is “Dingo”, which is a creative spark of inspiration perhaps slightly dimmer than “Captain Boomerang.” (The title has been long discontinued but is widely regarded as a trailblazer in the very small Australian superhero comic book market.)

Perhaps the most considered approach to Australian and particularly Aboriginal culture in an American superhero title was in the pages of “Planetary” #15 (Wildstorm/DC Comics, 2008), by British writer Warren Ellis. In this comic, the Aboriginal mythology of the Dreamtime is painted as akin to a transdimensional creation, accessible by sleeping monoliths.

The comic adds some scientific fantasy to render an aspect of Aboriginal culture fantastic and mysterious. If only all treatments of Australian subject matter were so nuanced. (We note that the July 2017 comic book adaption of the remarkable Australian science fiction television series “Cleverman”, featuring Aboriginal characters and published by the ever-innovative Gestalt Comics, has sold out).

So why does Tempus work? The character is a proper reflection of an ordinary Australian teen living on the Gold Coast. She speaks in a standard Australian English accent, and Mr Bendis chose, very deliberately, not to make the character stand out through both a broad Australian English accent nor by adopting Australian insignia in the character’s code name, uniform, or superpowers. The character is a contemporary Australian. Unlike the creators of Captain Boomerang, living in the 1950s and 1960s, it is very like that Mr Bendis has met many Australians given the ease of international travel and so had many individuals to use as source material. Messrs Broome and Infantino, creating Captain Boomerang, probably did not.