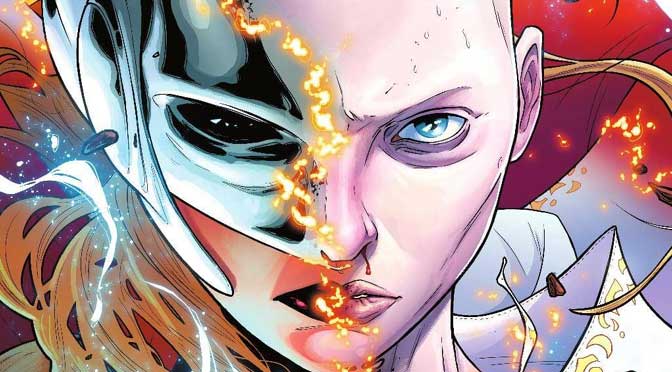 We have spent a lot of time and used many kind words on Mr Aaron’s scripting of the ongoing saga of Jane Foster in her role of Thor and the War of the Realms. Our first, enthralled review of the title, back in 2015, is here.

But three things immediately irritate upon reading this issue.

First, despite long promises, Jane Foster, a cancer sufferer, did not die a permanent death. Foster’s ability to wield the power of Thor was contingent upon her superlative worthiness. Foster’s worthiness has its foundations in the character’s selfless willingness to pick up the magic hammer Mjolnir (enabling her to save lives and do other heroic deeds) at the cost of expelling the chemotherapy which was attacking her tumours. Chemotherapy is intended to kill the cancer before it kills the patient: but as the chemicals constituting chemotherapy are a poison, transforming into Thor magically ejects that poison out of her body. Foster’s cancer gets progressively worse on each occasion she lifts the hammer.

Mr Aaron had long foreshowed a noble death for the character. That indeed happened: Foster defeated the god-killing monster Mangog and died in the task…. but then was brought back from death through the application of cosmic powers. (Those cosmic powers must be of a laconic hue, because while Foster was restored to life, she still has cancer.)

We were enthused about where the story would conclude. Perhaps we should not be so disappointed, given death is never really a permanent feature of American superhero comic books. But the character’s revival, given both the build-up and the universally understood nature of her disease, manifestly cheapens her ordeal.

Second, Marvel Comics have with this issue recalibrated the title’s numbering, for the second time within six months. Some farfetched sleight of hand enabled Marvel Comics to argue that the 700th issue of Thor was nigh. We have also discussed this recently at the conclusion of this review Upon passing that milestone and rendering the issue a collectable (and thereby marketable) item by reason of its numeration, Marvel Comics promptly took us back to issue one. It is vastly cynical.

Third, the War of the Realms seems to go on and on. We have now entered its fourth year of publication, and this issue indicates that the war will pick up its pace as Malekith, the leader of the Dark Elves, decides to invade the Earth. The ongoing war, measured by its duration of publication, is likely to be longer than World War One.

Mr Aaron needs to bring this now tedious plot line to a conclusion.

Three sisters on a road trip

In this issue, the three amusing and idiosyncratic grand-daughters of the original Thor have travelled back in time from a very, very far future to meet Foster. It is a poignant moment where they each express their admiration and respect for the character.

The journey is punctuated by miscalibrations as to which time period they are aiming for, and they jump from seeing a youthful Thor trying to pick up his hammer, to a prehistoric superhero (one of whom, amusingly, is the spirit of vengeance, Ghost Rider, mounted on a mammoth), and other visions of the past and future.

Marvel Comics frequently uses time displaced or parallel universe displaced characters in its mainstream continuity. The main examples of these are Old Man Logan (a very weathered version of Marvel Comics’ popular character Wolverine, rom a parallel universe future), Phoenix (more recently called Prestige, also from a parallel universe future), two versions of Spider-Man (one female, one black, both from parallel realities), and many of the current members of the mutant superhero team, the X-Men (brought to the present from fifteen years into the past). Perhaps these alternate version characters are by their own particular experiences simply more interesting than the mainstream versions.

In any event, there is no denying that the three granddaughters make for a fun trio.

After this frolic, we return to the war. It is dreary. Malekith demonstrates his throughly evil nature yet again, and in a way which is not so much petty as schlock silly. There are action scenes depicting battles on various planes of existence.

Sometimes a plot can lose its way. This saga instead has become disoriented as a consequence of continuing to follow its path.