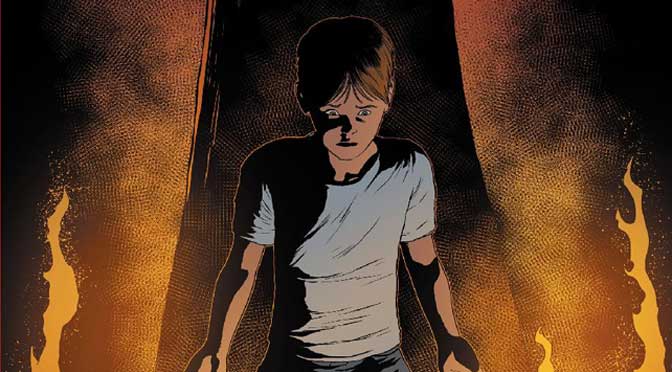 In this story, Zakudoh Stoner is a boy who has fallen from great height, through a window, and landed on the road in front of a good Samaritan driving a truck. Zak is critically injured, and taken to hospital. Zak’s distressed grandmother passes out onto the hospital floor at the news of his dire condition.

Zak’s morning had been eventful. He is thrown off the school bus when he gets into a fight with a bully, Meech. This is the last straw for Zak, who has been pushed about, tripped and intimidated all morning. Zak stands up to Meech, and Meech decides he admires Zak’s fortitude. The two try to make it to school on time by foot. But they pass a martial arts dojo on the way. Earlier that morning, Zak had been endeavouring to convince his grandmother, who appears to be Zak’s sole caregiver, to let him enter a martial arts contest. Zak is obsessed with martial arts. The prize money would help pay their rent, which was two months overdue. She emphatically refuses. Mr Phillips makes it clear that Zak is a good kid, and fleshes out the characterisation of the lead protagonist in very good order. Zak wants to help out with finances, wants to get to get to school, courageously stands up to a bully and wins him over, obeys his grandmother’s directives. But he soon finds himself, apparently by happenstance, in very deep trouble.

The martial arts dojo master invites the boys to stay and train. They are offered uniforms and kind words. But as the boys leave the change room, it is clear that they have been set up. The dojo’s young students, all black belts, use Zak and Meech for sport. The dojo master has disappeared. Zak and Meech are surrounded and systemically beaten by the young martial artists.

But then, a strange black cloud descends over the building. Zak’s eyes are illuminated in crimson, and a looming apparition settles into his body. And then the tables are abruptly turned. Zak is possessed by an inhuman fury, and savages the dojo’s students. Then, as Zak snaps out of his berserker possession, it is Meech’s eyes that glow with a sinister red light. Now the subject for possession, Meech beats up Zak, with the fight ending as Zak is kicked by Meech through a window. The black apparition flies away.

The flashback ends, and the scene shifts to a hospital theatre. Emergency surgeons battle to keep Zak alive. But Zak goes into cardiac arrest. The surgeons fail, and Zak dies. As a surgeon later observes, “the kid’s organs were mashed potatoes. Between that and the amount of blood he lost, it was too much”.

Suddenly, Zak wakes up, groggy, but oblivious to both death and general anaesthetic. Zak’s grandmother is told the news and is ecstatic. Zak then passes out, exhausted but unharmed. It is then we learn that the dojo master died of a heart attack, and that the dojo’s students are all dead. And one of the surgeons is in a terse, mysterious telephone discussion about Zak’s miraculous recovery, ending with the decision, “Make the call.”

Outside Zak’s hospital room window, storeys above the streetscape, the apparition hovers, watching Zak as he sleeps.

This is a story laden with mystery. The location for the story is an outlying and impoverished suburb colloquially called “Terror Town”. The narration describes how things have improved in recent times, with a reduction in violent crime. But it is clearly an ideal habitat for a dark force which thrives upon and is a catalyst for violence.

Mr Phillips manages to effectively execute the plot within twenty-nine pages, the perennially difficult task of the comic book writer: how to engage readers though the periodical release of the issues, but have this make sense within the ambit of a collected edition. It is both violent and slightly creepy.

But it is clear that Mr Phillips’ forte is characterisation. It is subtle and admirably sparse: much is done with little effort. This story is by its nature centred around one major character, but this in a way is a shame. Mr Phillips is well-suited to embellishing characters. Zak is a very sympathetic lead. This story is vaguely reminiscent of Mark Millar’s comic, American Jesus. As testament to Mr Phillips’ skills in eliciting an emotional response through his writing, we hope that Zak does not suffer too much in his ordeals to come.