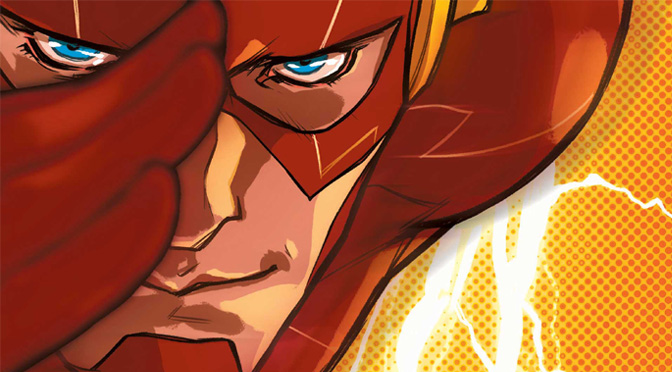 This title is one of the host of new releases from DC Comics as part of the “Rebirth” event by which the publisher engages in one of its periodic continuity replenishments, the first of which occurred in 1959. The Flash, as the name suggests, is an unimaginably fast superhero. On the front cover of this first issue, the masked face of the Flash is caught mid-stride, the edge of his hand at the zenith of its swing, a jaunty wave to the reader. The mouth is not set with the stereotypical gritted teeth of a crime fighter: instead, the Flash has a slight smile. It is the return of an old friend.

The writer of this comic, Joshua Williamson, strikes a balance between the twin themes of reinvention and invocation of the source material. Importantly, gone, it seems, is the spectacularly heroic death of the character which held the mantle from 1960, named Barry Allen. This death was depicted in Marv Wolfman’s 1987 classic, “Crisis on Infinite Earths”, and as a result of which the role of the Flash was taken on by a former sidekick named Wally West.

In this rebooted title, Barry Allen is a forensic scientist with the Central City police. He seems a little jumpy. This is the quirky, slightly flaky colleague at the office, who does his job well but would not be invited to a beer after work with the gang. Barry Allen is secretly the Flash, the fastest man alive and in this title suffers from what would otherwise be described as paranoid hallucinations and partial amnesia. In previous versions of the character, the Flash’s wife Iris was killed at the hands of the Flash’s adversary, Professor Zoom. In this title there has been some reworking: Iris is alive and is not Barry Allen’s wife. Instead it is Barry Allen’s mother who was killed by Professor Zoom.

The back story now also includes a solid relationship between Barry Allen and his father. He also has a good relationship with Wally West, who has, sadly, reverted to position of being the Flash’s sidekick, Kid Flash. The novelty of the mantle of a major superhero character being permanently passed along to a character in a supporting role is erased, and so one of the points of appeal of “The Flash” – perpetuation of legacy, and the need to live up to the expectations of the dead predecessor – has been removed. In this issue Barry Allen tells Wally West, “You’re not Kid Flash anymore… You’re a Flash.” Perhaps, but Wally West is no longer “the” Flash.

Aspects of the story seem subject to editorial interference. One of DC Comics’ major character assets, Batman, makes what is almost a mandatory appearance for newly launched titles. More worrying, perhaps, for purists, the blood-splattered badge of the Comedian is the subject of investigation by both the Flash and Batman. The Comedian is a notoriously amoral character from Alan Moore’s “Watchmen” (DC Comics, 1987). “Watchmen” is without doubt one of the best comics ever written. In the opening chapter of “Watchmen”, the Comedian is murdered. Playing with this stand-alone, iconic work is something DC Comics would only do recklessly: The Flash v. the Comedian (or more droll, Batman v. the Comedian) would be disasterous.

Despite this risk, Mr Williamson writes a solid story. Wally West is convinced he is being watched: Barry Allen has visions of Wally West apparently helpless and trapped in an iridescent ball of energy: the faceless visage of Professor Zoom, like a tarot card of doom, flickers before Barry Allen’s eyes. “I’m going to kill them all, Flash!” screams Zoom, his clawed fingers trailing blood in the vision. The story is a little hard to follow at times – it clearly is not self-contained – but the characterisation is entertaining. And the fury of Zoom is a baleful thing, over the horizon but inescapable. Mr Williamson deserves acknowledgment for his hard work in this first issue.