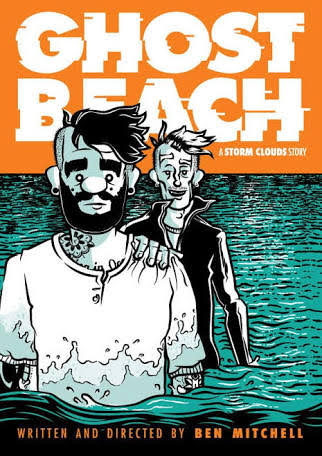 What happens when everything around you gets incrementally darker, and there is nothing you can do about it but reluctantly join the darkness? And what if you were compelled to make this decision not at the gates of some murky supernatural hell, but instead standing in the burnt-out wreckage of your cafe located in a low-key seaside town?

One of the best independent comic books we have ever read, Ghost Town looks at the lost and aimless denizens of Bontown, a gritty parody (or pseudonym?) for Newcastle in New South Wales, Australia, and how their day-to-day lives suffer an almost imperceptibly creep of horror and dread.

Newcastle (a town with a bizarre history of drug-fueled, collective violence) is the home of Ghost Town’s creator Ben Mitchell. Mr Mitchell has created an entirely believable cast of characters and imbued them with the essence of the town. Mr Mitchell’s characterisation and dialogue are impeccable. The chatter between the players ranges from startlingly ordinary, to deeply philosophical, to sardonically funny, often intermixed to startling effect:

To put it without finesse, a lot of things are going on within this comic, in the sense that each character intersects their lives with the plot only to the extent necessary to advance it. There is the impression otherwise that each character has other things outside of the story to do or not do.

In some strange way, it is as if Mr Mitchell is engaging in world-building, with a large cast of characters driven by different motivations (or absence thereof). But in actuality what Mr Mitchell is doing is replicating the networks and relationships contained in a single person’s life.

It is hard to say who the central character is, but it is most likely Jared Paige, a barista who operates the Churchkey Espresso coffee bar. Paige is an eminently likeable character, solid, funny, and not afraid to express himself. This all makes Paige’s fall at the end of the story all the more bitter.

Indeed, almost all of the characters are at the very least interesting and multilayered, save for the odious, cheating policeman Simon Dobson and the frankly terrifying drug dealer Charlie Anderson. Anderson’s casual tale of killing a homeless person simply because he can is an eye-widening insight into the personality of a semi-vagrant couch dweller, who otherwise seems to be a harmless over-user of prescription pharmaceuticals.

This is a brilliantly executed story and we look forward to future installments.