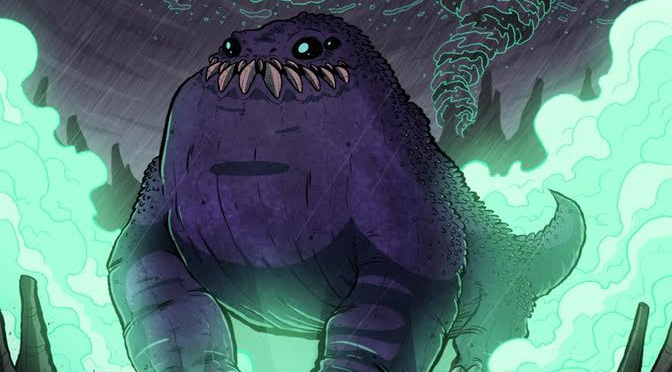 The Kickstarter blurb for this comic opens with the following elevator-pitch: “A Giant Monster Kaiju book in the wonky tone of Adventure Time.”

(“Kaiju”, as we have previously discussed, is a Japanese type of comic book dealing with enormous city-destroying creatures, in the manner of “Godzilla”.)

The overarching plot is amusing. Each year, once a week, every week for three months, a giant monster inexplicably appears from the sky, in the American Mid-West. The US Army generally disposes of these enormous beasts using rockets and tanks, but little seems to be known about them.

Importantly, in a faux-competition with the US Army in the destruction of these kaiju are amateur monster hunters. We meet two examples of these:

a. A vaguely Indiana Jones-type, rugged character with a square jaw and a fast car, and a mad scientist sidekick who devises an arsenal of eclectic weapons for use against the monsters;

b. A group of fifth graders, led by Neil, a chubby red-headed firebrand determined to kill a monster for himself. Neil is contemptuous of the tan-clad competition. It evolves that Neil’s parents run a hotel, and that Neil and his friends gather bombs, rockets and other explosive devices in preparation for the hunt of the beasts. Neil seems to move his personal arsenal around to spare rooms within the hotel. Neil is our protagonist, and it is hard to know whether to like his churlishness or despise his obnoxiousness.

It is also hard to say whether the monsters mean any harm. On the face of it, the monsters seem to be an incarnation of the hurricanes experienced in the American Mid-West. We suspect that this ambiguity – are they are threat, or are they just enormously goofy? – might be a critical issue as the plot evolves. At the end of the first issue, an enormous gelatinous tree-eating, almost happy monster is destroyed into green goo by the US military.

But Neil has a souvenir of his failed attempt to slay the monster: a tiny replica, some sort of offspring, trapped in a bottle, grinning like a maniac, in Neil’s possession. What will Neil do next, now he has his own pet monster?

The dialogue is generally funny and even charming:

“I quit. I don’t want to beat monsters anymore. I’ll keep researching them for you but only until I can become one.”
“Why would you do that?”
“I figured out what I really love. Breaking stuff.”

“You know what’s outside that window?”
“An economy motel with respectable feedback and a deceptively diverse continental breakfast?”

The writer, Ryan Little, clearly has a talent for soft comedy and a respectable sense of timing in delivery. There is however one out-of-tone moment in the dialogue, when Neil offers the riposte to the warning of danger, that his life only seems to be worth more because, as a fifth grader, he has more to lose. It is a solemn note that is jarring amidst the otherwise fine-milled humour.

This comic has been well-thought through and plotted. It is a fun, fantastic escape for younger readers, and we wish Mr Little and his artistic colleagues every success.