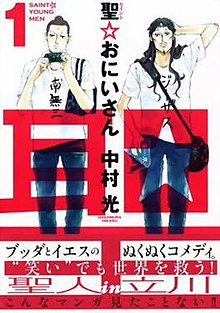 Your reviewer recently visited Canterbury Cathedral in Kent, in the south-east of the United Kingdom. Thousands of luminous stained glasses windows tell Biblical stories in sequential panels. A visit to the Chapel of St Eugene in the Cathedral’s ancient crypt is just as reminiscent of manga and other types of comic books: cartoonish ceiling art replete with medieval word balloons, painted in the 11th century, look surprisingly contemporary. There is a medieval and particularly cathedral provenance to modern comic books which is much more pronounced than Egyptian hieroglyphics.

Church art is one thing, but the Christian myth is quite another. The fantasy world-building of many manga, and the environment of consumer-driven contemporary Japan does not significantly touch upon classical religion. But Saint Young Men 聖セイント☆おにいさん , a Japanese slice of life manga series written and illustrated by Hikaru Nakamura, tells a new story of the life of Jesus Christ (but one not even faintly resembling the Book of Mormon). Christ is the roommate of Gautama Buddha, the founder of Buddhism, and both share an apartment in Tachikawa, a suburb of Tokyo.

Saint Young Men has been serialised by Japanese manga giant Kodansha in the monthly seinen manga magazine Morning 2. It has been in publication since September 2006. The serialised chapters are collected in seventeen tankōbon volumes as of July 2019.

The title is very popular in Japan – Wikipedia notes that over 16 million copies of the volumes sold, and particular volumes of the series have appeared in lists of the weekly and annual best-seller manga. It received a Tezuka Osamu Cultural Prize and was nominated at the Angoulême International Comics Festival.

The essence of the plot is that Christ and Buddha are taking a vacation on Earth. In an effort to integrate and understand Japanese society (“Exotic Japan!”), the two religious icons conceal their identities as pretend to be ordinary human beings. This is not always effective:

1. Jesus frequently wears a crown of thorns and enjoys telling and laughing at His own puns, which can lead to His forehead bleeding. He also likes cosplay;

2. At one stage, Jesus and Buddha perform in a stand-up comedy (manzai) show as “Long-Hair and Punch“;

3. Jesus is frequently mistaken for  the American actor Johnny Depp –  a caustic observation, that Mr Depp is better known to the average person than Christ;

4. When Buddha’s stomach growls while standing adjacent to a peach tree, the barren tree immediately bears fruit even though it had been barren previously. Buddha asks the tree not to worry about him so much.

Some of the puns feature some very black humour indeed: when the two are down on their luck, Jesus asks Buddha to sell Him – “Apparently, you can get at least thirty silver coins”, a reference to the sum Judas received to betray Christ, leading to His death.

The two are slightly goofy and harmless. Jesus is portrayed as loving all and everything (even shopping). Buddha is serene, and also likes manga. The title is naturally comedic. Jesus creates wine from water while in a public bath and Buddha shines when excited or agitated. But there are elements of solemnity – particularly when discussing the events leading to Jesus’ death in 32 AD.

This title is not for the devout.  But it is overall very funny. It is also very Japanese. There are of course many Buddhists in Japan. There are also many Christians in Japan – the religion was introduced into Japan by Jesuits in the 1540s, was oppressed during the Tokugawa sogunate, and came back to life after the Meiji Restoration. But as a percentage of the population, there are not anywhere near so many as in Western Europe or the Americas. Perhaps only in Japan could this manga have been written. It is somehow absurd while not being disrespectful or outright atheist – an admirable balance act and a very Japanese one at that.