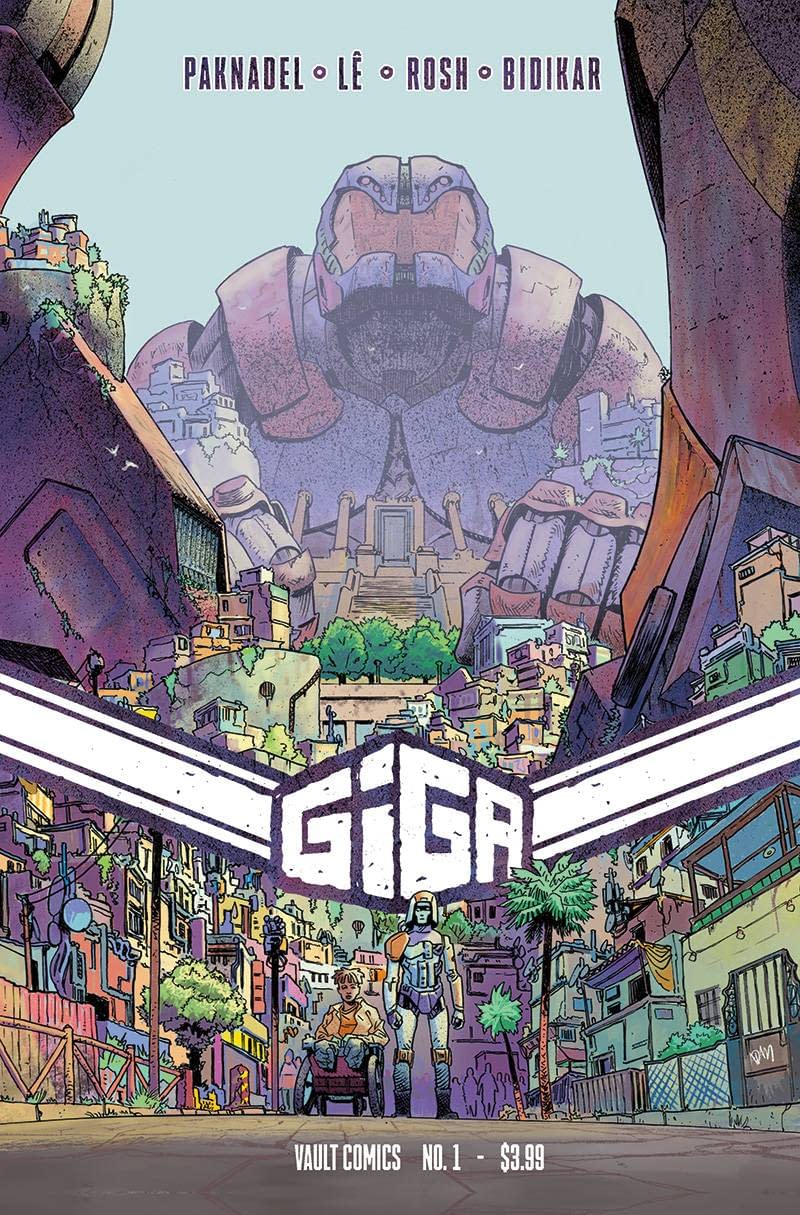 Little wonder the first issue of this title sold out. Giga is a science fiction story focussed around dead mechas – giant robots with highly advanced artificial intelligences, some of which have been rendered inert as a consequence of some sort of internecine war. Sadly, we do not see that other than as sculptures of the ancient saga – at least, not yet.

The title is not just about dead robots. Writer Alex Paknadel has engaged in some very detailed world-building. The religious order, called The Order, based around the inert robots comes with its own holy scripture (reminiscent of the heroic battles in the Jātakas of Buddhist mythology, which we also see on a vast and grand scale in Abaddon’s Kill 6 Billion Demons) which like the Bible and the Koran is subject to interpretation; a corrupt pontifex; a paramilitary religious enforcement arm entirely akin to Iran’s Gašt-e Eršād (گشت ارشاد); and a fast track to elite status within the community through apprenticeship within the church. We also have Luddite heretics, called “dusters”, who are at war with The Order. But let us not forget the robots. Artist John Lê’s masterful depiction of these mecha, infested with human habitation, is epic in its scale.

Some of the robots are not dead, but instead prowl around in isolated locales. The story becomes a type of murder mystery. One of the robots has been destroyed. Who killed it? Authoritarian police are inherently lazy, because instead of digging for truth, they use crime as a way of justifying their regime’s politics. Suspicion therefore immediately falls upon a group of dusters, who are captured and executed in public in issue 2. The mecha’s destruction is used, in issue 3 of the series, by The Order to impose rigid control over society. There is a sense of a false flag operation at play. It is a sophisticated and nuanced plot.

The protagonist is a likeable character named Evan. Evan is missing both legs, which becomes a critically important plotline in the story. Evan’s friend Aiko created Evan some prosthetics, powered by an AI. While an initiate in the religious order, Evan was caught in an explosion. The explosion apparently killed Aiko. Thirteen years have passed and Evan now lives in a slum, scavenging for metal parts. Evan has a robot girlfriend… perhaps that says too much about the readership. Evan is accompanied by an “illegal” AI named Lauren who he tries to keep sane as her parts begin to fuse and leak. Lauren is resourceful and assists Evan with his physical disability, but her time is running out.

Looking at this story as just a mecha adventure misses something. Evan is missing his artificial legs. Where are they? When we first read this story, we sort of assumed that he might have sold them in a need for cash.

Artificial intelligence works in inhuman ways. The most obvious example of that is in artificial intelligence art – https://en.wikipedia.org/wiki/Artificial_intelligence_art . The results are not intuitive to human thinking. US military agency DARPA has established a project for Explainable Artificial Intelligence (XAI) – a program which enables humans to understand machine learning outcomes. AI-generated outcomes and solutions can be very weird to humans.

We as humans thinking of our bodies as being vessels for our brains. This comes from an understanding that brains call the shots in behaviours, whether we are talking about the ganglia of a cockroach or the brain of a human. Everything devolves down from the brain. But an AI might take a different approach, especially an AI which was first created as a set of legs for a disabled man. It has become clear that Lauren has almost literally lifted herself up by the bootstraps. Lauren has evolved up from her legs. It is a very AI-orientated and not-human-obvious approach to problem solving and machine evolution, and the creators are to be commended for it.

Giga is impressive. We are very grateful that the publisher, Vault Comics, made such a fuss of of this title on Twitter or we might have missed it.