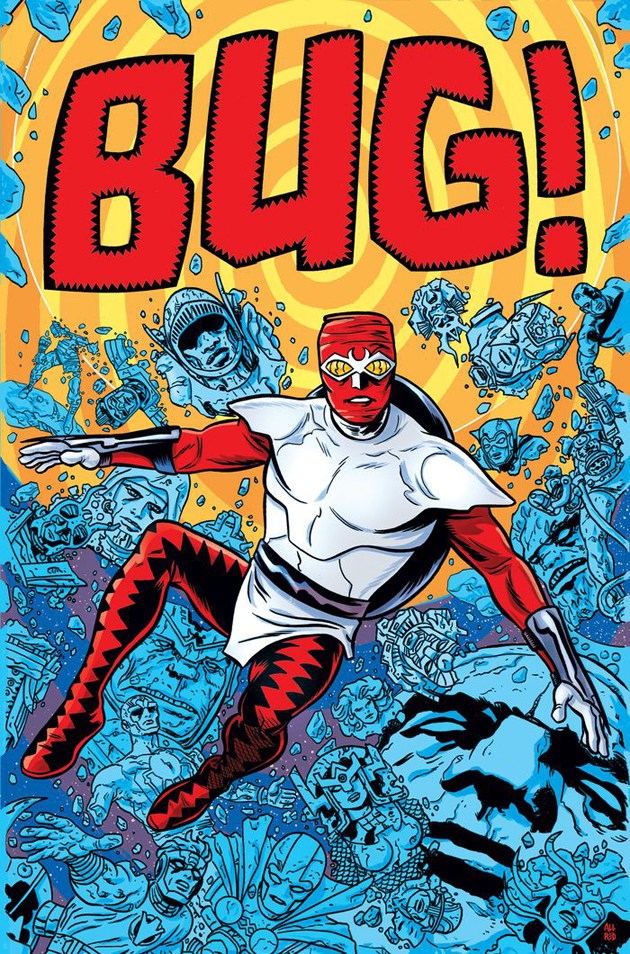 When American publisher DC Comics announced “Bug!: The Adventures of Forager,” readers may or may not have needed a reminder of just who “Forager” is. The character was part of celebrated American creator Jack Kirby’s “Fourth World“ saga, a collection of series that invented DC’s cosmic landscape. Long-standing characters like Orion and the villain Darkseid originated from these stories.

Forager was one of the less fortunate characters of this saga. Appearing first in “New Gods” #9, the character hailed from a race of humanoid-insects, eventually breaking free of the hive. Forager fought with The New Gods before his death in 1988 as part of DC’s “Cosmic Odyssey”, a droll miniseries. Forager was an easy editorial target, the kind of C-level character that could be killed for dramatic effect (but often bathos) without the trouble of shuffling around established titles.

Though the Forager mantle has since been occupied by different characters, even making animated appearances in Warner Bros. Entertainment’s “Superman: The Animated Series” and “Justice League”, it seemed like the original Forager would never be seen again in comics. Yet, after a nearly-30 year absence, family-creators Lee Allred, Michael Allred, and Laura Allred have resurrected this obscure character and returned him into the DC Universe.

That Forager’s unlikely rebirth should happen this year is no accident. 2017 marks the centennial of Mr Kirby’s birth, an event which has prompted a slew of related tributes across multiple US publishers. Marvel Comics and IDW Comics are respectively offering variant covers and oversized reprints of the artist’s former works.

DC, however, has particularly capitalized on the anniversary. Along with their own reissues, several limited-series have been opted to highlight Kirby characters. “The Kamandi Challenge,” “Bug!,” and the upcoming “New Gods” all seek to highlight the creations Mr Kirby brought to DC. This context matters, as “Bug!” is nothing if not an excuse to showcase characters created by Mr Kirby. The cover itself shows Forager amongst a smattering of these creations, from Atlas and Etrigan to Mr Miracle and Big Barda.

The opening issue of “Bug!” particularly looks to showcase Mr Kirby’s “The Sandman” (the 1970s version, rather than Neil Gaiman’s much more famous and celebrated 1990s iteration). The issue opens with an attempt to ingratiate new readers, as Forager awakens from a nightmare that briefly recaps his own history and “Cosmic Odyssey” death. He explores his odd surroundings, coming across a ghost girl and her talking teddy bear with a penchant for quoting Albert Camus. Forager then knocks over the ghost girl’s row of dominoes, which are strangely shaped like the circuits of a Mother Box (a powerful Fourth World technology capable of producing reality-shaping energy).

After triggering a cosmic accident, Forager quickly discovers he’s dreaming when he encounters Sandman, who attempts to wake him. The two come across other Kirby creations before falling into the trap of General Electric, a villain tragically underutilized by DC considering his hilarious name. Sandman and Forager work to escape the trap and thwart General Electric’s plan until the issue’s strange and abrupt end.

“Bug!” is a difficult series to summarize not only because of these rarely-appearing characters’ sordid histories, but because its pace so constantly borders on manic, something in which Mike Allred excels. Characters enter and exit its stage in rapid succession while conflicts begin and end in the space of a panel. While there’s little keeping the series centered, Forager’s minor but essential characterization keeps things from teetering off the rails entirely. The character’s desire to explore the universe, to no longer be content as a worker drone marching to the orders of either his hive or to the New Gods, comes through during the moments that threaten narrative disarray.

Forager’s existential crisis is a theme often explored in the Allreds’ collective body of work: Superheroes becoming preoccupied with the meaninglessness of superheroics. Though the theme is better explored in Mike Allred’s stories “X-Statix: Dead Girl Presents” and “Batman A-Go-Go”, that narrative spool ends in a necessary hook for Forager that never crosses over into a dour cynicism.

While much is surprising in this series, the single most baffling aspect goes beyond the pages. The title bears the “Mature Readers” logo that signals material suitable for older readers. Outside of the fact that “Bug!” is published under the Young Animal imprint, whose books bear the “Mature” tag, nothing in the issue suggests why this should be the case.

The book’s targeted readership might register as a minor point. Yet, the first issue suggests this series could be the all-ages title DC’s line-up is largely missing, a goal to which the book’s high energy and clear optimism further lends itself. Perhaps Forager’s slang-heavy dialogue would read as forgivably corny in the context of a book aimed at a youthful demographic. As it stands, his speech instead reads as merely jarring among the rest of the dialogue, which maintains the knowing silliness that has made Mr Allred well-suited for the “Batman ‘66” comic.

Though the writing succeeds against its faults, Michael Allred’s art is the strong point. It is hard to imagine an artist better matched for delivering the more bizarre Fourth World designs, particularly Forager himself. The panel layout keeps the book’s high pace in check, as even the most chaotic, word-heavy pages are both varied and digestible.

Like its protagonist, “Bug!” is something of an odd creature not long for this world. Though the book is slated to reach six-issues, it is hard to imagine a text this eclectic reaching a viable readership, especially with the Mature tag keeping it from what feels like a natural audience. Like Forager, however, the book’s oddball personality and hectic pace are refreshingly offbeat. Though future issues would benefit from some narrative refining, “Bug!” succeeds beyond its role as a showcase for Mr Kirby’s work and embodies the same spirit that made those creations last this long.