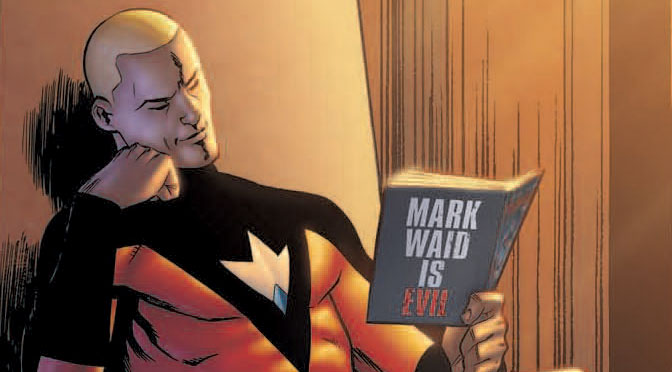 With Warner Bros. and its subsidiary business DC Comics getting ready to lay all of their cards on the table in the forthcoming movie entitled “Batman v Superman: Dawn of Justice”, Superman is once again going to be the trump card. The character has to share the space with Batman, though, and if the movie stays true to the source material, The Man of Steel is not going to be cast in the brightest of lights. But the property is still the cinematic draw, which means Superman deconstructions and pastiches are going to become, again, a popular theme in comic book writing.

Case in point is one of the most recent and effective deconstructions of the Superman mythos: Mark Waid and Boom! Studios’ Irredeemable – a 37-issue series published from April 2009 to May 2012 about a Superman analogue called the Plutonian. This character, Superman by another name, went rogue and killed a large portion of the human population, before hunting down the rest of his former teammates (who are themselves based on various DC Superheroes.)

The most interesting thing about Irredeemable is that it is not only one of the best recent takes on the Beware the Superman trope, but also offers so much more in its narrative. It focuses largely on the deconstruction of DC Comics’ principle character team title, Justice League, but the reader will still be treated to a solidly written superhero yarn full of twists and turns, with an ending that contradicts the title: the conclusion redeems the Plutonian in a way that makes the character more relevant to Siegel and Schuster’s creation than any other Superman analogue to date.

This is not to say that the story will work if you take out all the parallels to existing franchises. It adds texture to the story and saves a lot of time to the point where it can be considered as cheating; Waid was able to condense a heavy story with multiple arcs into 37 issues because he doesn’t need to do detailed set ups for the characters. Waid shows the reader who the character is based on, and general familiarity with that character fills in the gaps. The hero called the Hornet only appeared in less than 10 pages throughout the whole run of Irredeemable and was already dead before the second half of the first issue. But Waid establishes the character as this universe’s Batman and so the reader familiar with the continuity of DC Comics will instantly understand the Hornet’s friendship with the Plutonian, and the motivation behind the Hornet’s paranoia.

What makes the Plutonian an engrossing character is that it explains a lot of things about Superman. The physiological aspect is easily comprehensible, and something that other scribes have done in the past. The Plutonian is a psionic who can manipulate matter at the molecular level. The character can transfer kinetic energy into the air molecules striking his eyes, shift his mass into the surrounding atmosphere, and manipulate the density of any matter with a thought, including his own skin and muscle. Given enough awareness and control, the Plutonian can alter quantum mechanics with a thought but the character is not aware of his potential. The Plutonian just thinks he’s strong, capable of flight, and able to shoot eye beams.

The more interesting part about The Plutonian is how the character makes the first logical case for both the selfless protector who spends every waking moment answering any plea for help within earshot (which is a lot, for someone who can hear every single whisper made in the planet) and the mad god who will sink an entire continent on a whim. What is even better is that Irredeemable shows, in a believable way, how the former can turn into the latter.

It is the problem with many Superman Gone Mad stories. These stories usually have a single tragic or catastrophic event that makes Superman snap and turn into an all-powerful dictator or a rampaging godbeast. Irredeemable shows that someone like Superman needs to be wound tightly and slowly throughout the years – that his morals do not decay in an instant, but instead just rots slowly. The decay starts at an early age and festers until he can’t take it anymore. And so, the character just up and murders the world over an unfair request.

Finally, Irredeemable is also worth recommending for how it wraps its story up. With most comic book yarns dealing with antagonists as powerful as the Plutonian, the solution also deals in power – someone physically stronger or someone with cosmic or magic powers. Most of the time the savior is a deus ex machina plot device. Irredeemable teases you with this unsatisfactory conclusion. The Plutonian’s creators – a couple of omnipotent interdimensional alien beings – enter the picture during the last few issues (an incident that irradiated a large part of the planet as a side-effect), restrain the Plutonian, and transport him to the end of time, where, in some convenient science, entropy starts to eat away at the character’s molecules. It was a fate that the Plutonian rightfully earned, but readers deserved a better ending. So one of the main protagonists, the Doctor Who-based Qubit, teleports in and rescues The Plutonian. Qubit offers the Plutonian the one thing he, with all of his powers, can never get: one chance to wipe the slate clean and start over.

And, thanks to Waid’s genuine love of the character, the Plutonian gets his fresh start in an ultimate homage. Qubit was smart enough to trick the Plutonian into killing himself while cleansing the world of radiation at the same time. Qubit, like the character he was based on, is not without mercy, and so the Plutonian was distilled back into his essence and given a chance to enter any one of a number of portals to different realities. The essence chose one, where he entered the mind of two young boys who were conceptualizing a comic book pitch for the funny papers.

The surnames of those two boys? Siegel & Shuster. It is a charming nod to the creators of the superhero Waid so clearly respects.