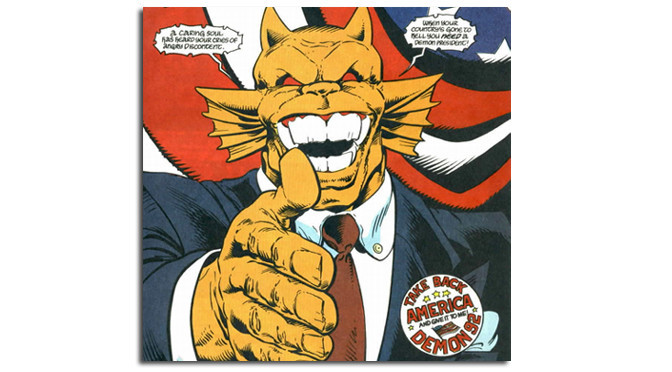 One highly peculiar and clearly satirical 1992 storyline contained in the pages of an obscure comic book called “The Demon”, published by American comic book company DC Comics, where a rhyming demon runs for president of the United States is amongst the oddest of all US mainstream comic book stories. But from the perspective of a very cynical reader in 2016 the story has some uncanny similarities to the current presidential election.

“The Demon” is an anti-hero created by acclaimed writer Jack Kirby in 1972. The character has yellow skin, blazing red eyes, and horns. There is an underlying sense of Jekyll and Hyde schizophrenia to the character, premised on the idea that an evil demon of hell named Etrigan is harboured within a well-meaning human named Jason Blood. Etrigan breathes fire and is just as likely to incinerate other characters within storylines as to assist them. As such, the character is difficult to define within the genre of superhero comics and but for being part of its famous creator’s legacy to that genre, would more properly sit within the realm of horror. Etrigan is magically summoned by the incantation, “Gone, gone, form of man, arise the demon, Etrigan!”

Donald Trump is an American entrepreneur and media celebrity born in 1946. Mr Trump is a controversial figure presently running for the Republican candidacy of President of the United States. He has a shock of yellow hair brushed forward and sideways over his forehead. During a professional wrestling match in 2007 entitled “Battle of the Billionaires” Mr Trump would have faced having his hair shaved if his champion has lost (he did not). Outlandish showmanship is an indicia of Mr Trump’s public persona, and Mr Trump has not been shy in delivering intensely confrontational and controversial messages during the present campaign.

In this story, Etrigan decides to start a presidential campaign — and, despite being a blatantly evil and repulsive being, he is actually pretty popular with some voters. Just like Donald Trump, the fact that Etrigan is politically inexperienced, small-minded and completely devoid of natural hair does not stop Etrigan from attracting a worrying amount of devotees.

Also like Mr Trump, anyone with common sense assumes this is a joke at first. Jason Blood and his friends think Etrigan has no chance of winning, but they get increasingly nervous and frightened as the storyline progresses and his popularity grows. The character even becomes a best-selling author thanks to “America Rules! A New Vision For America’s Future”, a book consisting of pictures of Etrigan in patriotic poses with four lines of text per page. Mr Trump has written a book, entitled, “Crippled America: How to Make America Great Again” in 2015.

Like Mr Trump, Etrigan expects other countries to pay for his ideas, and is pretty rude at debates.

Etrigan goes up 16 points in the polls after burning a TV presenter alive; the media is eating up his every move, helping feed his popularity.

DC Comics’ primary character property Superman enters the story at the end of “The Demon” #27, stopping Etrigan when he is about to kill a religious fanatic who tried to assassinate Etrigan because Etrigan is a spawn of Satan. In “The Demon” #28, Etrigan tries to make a deal with Superman: Etrigan will let the man live if Superman endorses Etrigan’s presidential campaign. Superman refuses to get involved one way or the other, and it is at this point that the reader finds out what this bizarre little tale is really about:

In other words: “Go out and vote.”

Superman believes the American people will shut down Etrigan once they figure out the character is evil (the horns and hellfire are not obvious enough), but Etrigan glibly points out that, “If the people choose evil, it’s theirs — that’s democracy.” The two characters discuss these complex matters, of course, since this is a superhero comic from 1992, while furiously punching each other.

Despite that, the fact that the two characters were seen hanging out sparks a rumor that Superman will be Etrigan’s running mate, and the demon’s camp all but confirms it (they call Superman a “close personal friend”).

Superman is eventually forced to make a public statement clarifying that he is not planning to become vice president to a foul creature from the bowels of the underworld, but it is too late: Etrigan has already won four primaries because of the rumor. As of the time of this article being published, Mr Trump has not yet announced a running mate. This week the rumour is that either Ted Cruz or Ben Carson are likely to be or have been approached by Mr Trump for this purpose. But there was speculation last week that this would be Sarah Palin, former governor of Alaska and former presidential running mate of John McCain. As the similarities between Superman and Sarah Palin are scant, other than sharing a penchant for wearing reading glasses as a method of masking actual intelligence, the analogy wavers at this point.

To avoid the embarrassment of being beaten by a yellow-skinned, cape-wearing, verse-dispensing monster, Bush Sr. says he would be willing to take Etrigan as his running mate. Etrigan likes the idea, because if he becomes Vice President then he can maneuver his way to the Oval Office (by eating the President). There has, incidentally, been some recent media speculation that Mr Trump may be wooed by one of his present rivals to become Vice-President.

Just before Etrigan can deliver his speech at the Republican National Convention, though, the protagonists manage to turn him back into Jason Blood, who immediately drops out of the race. The issue ends with Etrigan telling Superman that he will try again in 1996 (the character does not, perhaps intimidated into not contesting Bob Dole for the 1996 Republican candidacy). In 1999 Mr Trump filed an exploratory committee to seek presidential nomination of the Reform Party. In 2011 Mr Trump announced that he would run for president, and then abruptly withdrew.

This is probably not the best story written by the late and genuinely lamented Mr McDuffie (a compelling and successful advocate within the comic book industry for ethnic diversity), but it is definitely one of most interesting, especially in the current American political climate. What lessons can we draw from this silly but simultaneously thought-provoking piece of political satire? Mainly, that if we want Donald Trump to be defeated this election, someone should go up to him and say “Gone, gone, o’ Trump, rise once more in the form of man” to force him to turn back into his human form.