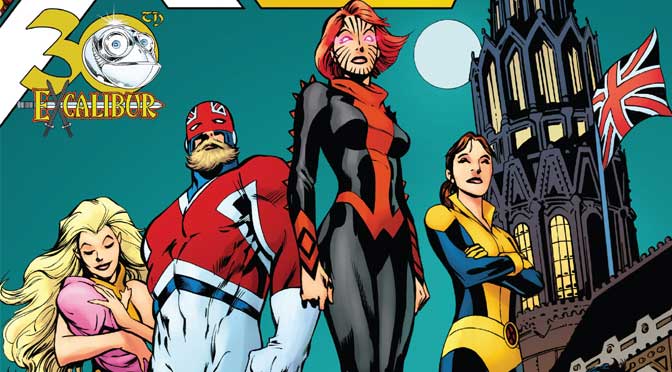 The 2017 annual for US comic book publisher Marvel Comics’ title X-Men: Gold is unusual. The publication may dampen comic book readers’ expectations of a comic book touted as an “annual.” First, it does not have a longer-than-usual page count compared to its monthly counterpart. Second, it is a single self-contained story: in contemporary times, “annuals” customarily feature multiple stories and/or extra short segments, or conclusions to very long running storylines.

X-Men: Gold Annual 2017 is a lighthearted standalone story. It is also made special because it helps celebrate the 30th anniversary of Marvel Comics’ British superhero team, called Excalibur. A number of that team’s original members featuring prominently in the issue despite being an X-Men title. The cover is a homage to the front cover of Excalibur #1 (see images), depicting the characters as they were then and as they are now.

Excalibur, created by X-Men luminary Chris Claremont, was a very popular title when first released. It featured some characters from the X-Men roster, and had a decided fun theme to the stories, in marked contrast to the desperate, life-or-death battles which featured in Uncanny X-Men at the time. The superhero team primarily explored multiple dimensions, often encountering alternate universe versions of themselves. The title featured some very funny cover art by British illustrator Alan Davis.

Once Mr Davis left, and the quality of the title declined. Mr Claremont ceased to be involved with Excalibur from 1991, and Mr Davis rejoined, but this did nothing to stop falling sales. British writer Warren Ellis was then deployed by Marvel Comics to save the title, also without success. Excalibur was eventually cancelled after ten years of publication, ending with the marriage of two of the characters, the super-strong Captain Britain and Meggan, a shapeshifter. Efforts in the early and mid-2000s to revive the franchise failed.

This story does however start out rather grim. It introduces an extraterrestrial character called Starhammer who is hunting Rachel Grey, a former Excalibur member and current member of the X-Men. Like her mother, Jean Grey, Rachel Grey went by the moniker Phoenix. Starhammer seeks revenge against Phoenix. The character’s home planet was destroyed by the destructive cosmic entity called the Phoenix Force, for which Rachel Grey used to be a psychic, living host. Starhammer also suffered a humiliation because the Phoenix tampered with his mind, imprinting a false memory that he was successful in destroying the Phoenix Force and saving the galaxy.

This brief, ominous introduction of the antagonist forms the basis of the plot. But the story then sharply curves in a complete 180 degrees in tone. It then depicts the current iteration of the X-Men receiving an invitation from Captain Britain and Meggan, who wish to celebrate the birth of their baby. As we have mentioned in our review of Rogue & Gambit, this current roster of the X-Men is led by Kitty Pryde. Pryde is a young character, exhibiting a more lackadaisical and even cavalier approach to leadership, as evidenced by the carefree banter she enjoys with other X-Men members (including two stalwart characters and former leaders of the X-Men, Storm and Old Man Logan. Both are Pryde’s seniors in terms of age and tenure with the X-Men).

After a brief segment that shows the X-Men traveling via commercial flight as opposed to using their futuristic aircraft, the Blackbird (in an effort to save on the cost of jet fuel!), we are introduced to the real star of the story. This is Captain Britain and Meggan’s daughter, named Maggie. As expected of a baby born from superhuman parents existing in the American superhero comic book genre, Maggie is anything but normal. Despite her body being that of a healthy 3-month old baby, her mental faculties have developed so fast that she is capable of fluent speech and intelligent enough to carry a philosophical debate about the illusion of choice.

Baby Maggie is entirely engaging, both because of:

a. her startling conversations with the adults (particularly her fondness for the mutant Nightcrawler, who with his demonic features looks the least like a normal human out of the cast and would normally look scary to babies) are very entertaining; and
b. she is the one who actually manages to stop Starhammer’s ambush without resorting to violent means. In fact, Maggie’s advanced intelligence leads to a solution that helps Starhammer abandon his quest for revenge, while giving him a chance to rebuild his lost civilization.

It is very ridiculous, in the style of Excalibur, yet still entertaining. This X-Men: Gold Annual manages to keep the plot lighthearted while providing a hyper-kinetic action scene. And to top it all off, it introduces a new character, Maggie, that will most likely play a big part in future X-Men stories. It is a fitting homage to the much loved Excalibur title.