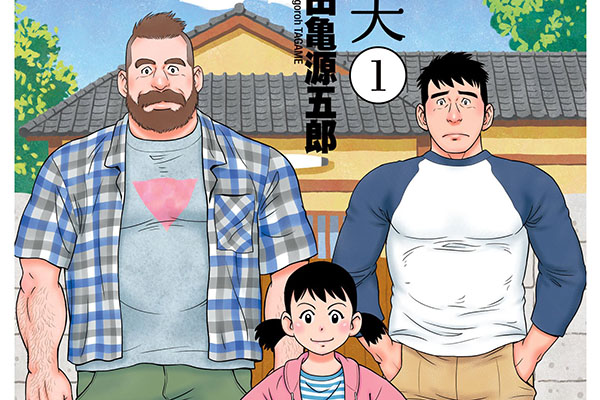 Yaichi is a work-at-home suburban dad in contemporary Tokyo; formerly married to Natsuki, father to their young daughter, Kana. Their lives suddenly change with the arrival at their doorstep of a hulking, affable Canadian named Mike Flanagan, who declares himself the widower of Yaichi’s estranged gay twin, Ryoji. Mike is on a quest to explore Ryoji’s past, and the family reluctantly but dutifully takes him in. What follows is an unprecedented and heartbreaking look at the state of a largely still-closeted Japanese gay culture: how it’s been affected by the West, and how the next generation can change the preconceptions about it and prejudices against it.

Written by Gengoroh Tagame, the title addresses prejudices faced by members of the LGBTQ community in Japan. Mr Tagame has commented, “while I was writing the manga, I wanted as many people as possible to read it. In the last few years, gay marriage has been legalized in countries all over the world, and it may happen someday in Japan too. When that happens, it would be a shame if people were not aware of gay issues… that’s why I welcomed it being turned into a series.”

As the series progresses, the characters and the community deal with the concept of a gay foreigner, but also the foreigner has to adjust to the foibles of life in Japan, including how Japanese people mourn the dead, and flippant things such as tempura sushi: viewing what is accepted through the prism of an outsider’s perspective. It was described by The Guardian in a review as follows:

“Yaichi hesitates unaccountably before inviting Mike to stay (Mike is in Japan because he wants to see all the places Ryoji told him about before he died). Then he worries that the stranger now sharing his bathroom is about to hit on him: after all, he looks just like his dead brother. How, he wonders, will he explain to little Kana that in Canada men may fall in love and even marry? How, in other words, can he hope to keep the disgust from his voice?… [it is] touching and complex”.

The manga was published in Futabasha’s Monthly Action magazine from November 2014 until May 2017. In 2016, it was a nomination for Best Comic at the 44th annual Angouleme International Comics Festival in France.

My Brother’s Husband is to be adapted for a live-action TV series adaptation, broadcast on NHK in Japan, for three episodes in March 2018. The English translation of the manga is available via Amazon.