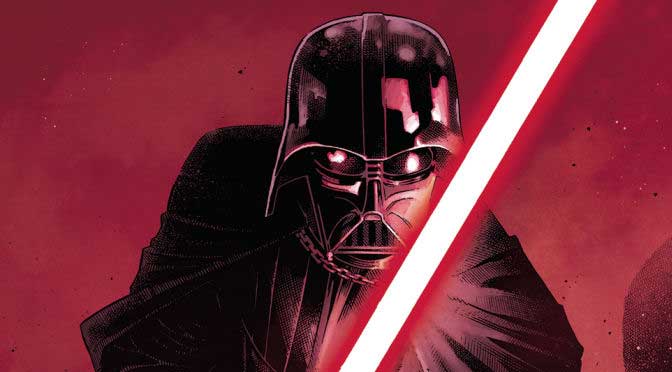 “Star Wars: Darth Vader” is a new comic book series from American publisher Marvel Comics. As the title suggests, this comic focuses on one of the Star Wars franchise’s most popular (and lucrative) main characters, Darth Vader. The comic is set after the events of the third prequel motion picture, “Revenge of the Sith”. The character Anakin Skywalker is defeated, burned alive, and revived as the villainous Darth Vader. Vadar is a “Sith Lord” – a grandmaster of an unseen energy source called The Force, but manipulated in a malevolent way. The story arc sets up Darth Vader’s first exploits as a Sith Lord under the employ of the Galactic Republic and its Emperor Palpatine, who is also a Sith Lord. The first issue provides an exposition on the Sith’s red-bladed lightsaber, as well as the start of Vader’s quest to build his own. As reviewer Tom Bacon in Wegotthiscovered.com, in our view, correctly states, “It suggests that, over the millennia the Sith have been hidden, they’ve secretly been preying on Jedi Knights. Palpatine’s strategy is also a cunning one, of course. It provides Darth Vader with a channel for his rage and anger, a target that he must seek out and destroy. The first hints of the Dark Lord’s relentless pursuit of the Jedi are found in his own need, in the quest that his master has set him. It’s smart writing.”

In terms of quality of writing, we find no faults in “Star Wars: Darth Vader” #1. The comic provides insight into the volatile relationship between Emperor Palpatine and Vadar as his new apprentice. But it does not rely on the grating melodramatic dialogue which led to the prequel motion pictures, written and directed by George Lucas, being jeered at by Mr Lucas’ aged, sophisticated audience. Emperor Palpatine treats Vader as an abusive master would a pet dog. Guidance and aid is provided, but punishment is meted out brutally and swiftly at the slightest hint of hostility. This helps flesh out Darth Vader’s duplicitous acts in various mediums and spin offs. Reviewer Ricky Church at FlickeringMyth.com notes, “His mental state is worth examining, but too much time is spent on Palpatine lecturing Vader on building a lightsaber than it is on the death of Vader’s family.” We disagree. The relationship between master and apprentice is perhaps the most compelling aspect of this title.

Those who seek action scenes in a comic book will not walk away disappointed. “Star Wars: Darth Vader” #1 sets up Vader’s first task as a Sith, which is to build his own light saber using “kyber” crystals (a crucial component of a lightsaber). These crystals must by ritual be forcibly taken from a Jedi (a Jedi is the benevolent antithesis to a Sith Lord). And so in the start of that hunt, the Sith Lord finds himself contending with a group of armed bandits without any weapons save for his command of the force. It is an impressive fight scene and establishes Vader as a force to be reckoned with even without the trade mark light saber. Reviewer David Pepose at Newsarama observes, “…if you an ambitious, character-driven Vader version of “Batman: Year One,” this isn’t the book for you”. Again, we disagree. In our view, the issue does a fine job of balancing action and character origination.

“Star Wars: Darth Vader” #1 is a technically sound comic book. If there is ever any flaw, it is the fact that it struggles to find purpose. As stated above, Darth Vader is one of the most popular characters in the Star Wars franchise. Every nook and cranny of the character has been explored in various mediums. As good as this comic is, it provides nothing new of note. In a way it is an exploration of a corner of the Star Wars universe that nobody bothered to look at, because every longtime fan already knows what is in it.

“Star Wars: Darth Vader” #1 also includes a comedic short story by Chris Giarrusso. In this back-up feature, Vader’s strict and ruthless treatment of underlings is made fun of, namely by showcasing the speed in which he goes through subordinates. Those who make the slightest of mistakes is disposed of, be they human or robot. The story does not really add anything to the experience (and those who don’t appreciate the humor will be of the view that it overstays its welcome), but will provide value to those who enjoy lighthearted cracks at the Star Wars mythos.