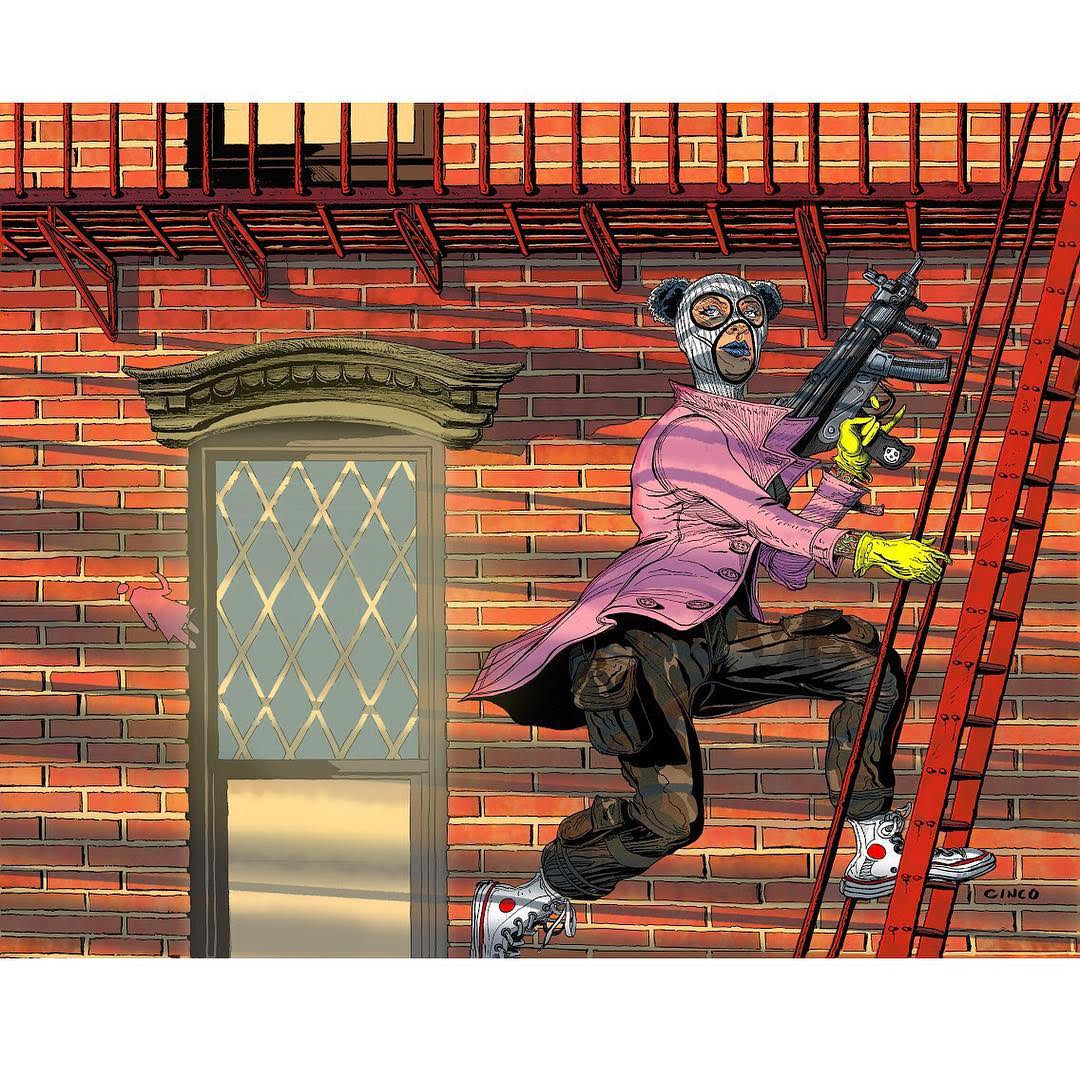 Back in May 2017, we wrote an extremely positive review of Popova #1. Written by two men, Dre Torres and Alex Valdez, this is a feminist rape/revenge genre comic book. Self-evidentially this is a grim genre, and there will contention about its deployment by male writers. The risk is that rape/revenge either is or evolves into a diminishment of the horror of rape and sexual abuse, or even worse, the subject of titillation for a male audience.

This comic (and its writers) successfully walk the tightrope of understanding, anger, and vengeful empowerment. One man ends up with a kitchen cleaver in his skull. This death blow is delivered by Sadie, the main protagonist and in this instance victim, and encouraged by Scarlet, her mentor. A second rapist is shot from a distance in an alley as he attempts to rape a drunk victim. Another man, a priest, let off by a court for rape, is hanged from a freeway billboard after being branded on the cheek by Sadie.

The depth of thought which goes into the portrayal of the acts of violent revenge is considerable. In respect of Sadie’s murder of her violent partner, it comes after a monologue from Scarlet, who examines the merits of a conclusive act of retribution. (Scarlet had already severed the man’s hand at the wrist – it is not enough for Scarlet.) She persuades Sadie to finish him with a compelling appeal to justice.

In the case of the third murder – Sadie’s hanging of the priest – it seems that, from a conversation immediately prior to his murder that he may have been innocent. What, then, of the merits of vigilante justice? Criminal justice systems sometimes fail to get convictions, because they are designed to do so. The rationale of a criminal court in a Western society with its standard of “beyond reasonable doubt” is that it is better to let one hundred criminals go free than to allow one innocent person to be punished. Sadie’s brutal murder of what appears to be an innocent man is the antithesis of this. There is no justice in hanging an innocent priest on the basis of Sadie’s failure on the facts.

There is some Tarantino-esque fetishism. One particularly dangerous character constantly wears a panda balaclava – the juxtaposition of cute and murderousness had its origins in Japan and is designed to be both disturbing and alluring. But for the most part the story is part-gangster pulp and part-feminist. The article we have linked to above refers to motion pictures such as Thelma and Louise, Irreversible, I Spit On Your Grave, Deliverance, and Fury Road as epitomising the rape/revenge genre. An addition to that list is the confronting violence and grim retribution of The Girl with the Dragon Tattoo. Popova sits comfortably amongst these horror stories.

Perhaps an unintended outcome of this particular issue is the pause for thought around superhero vigilantism. The branding of the dead priest (as well as Sadie’s other victims) brings us to the 2016 motion picture Batman v. Superman, where a jaded and increasingly violent Batman has begun to brand the cheeks of those criminals he captures with the symbol of a bat. Sadie brands the cheeks of her victims with the restroom logo of a woman, but one carrying a kitchen knife. But Sadie seems to have made a mistake in killing the priest (although shooting his driver in the head, after his idle revelations to the priest as to multiple rapes of his female employees, indicates that Sadie’s intelligence on that murder was correct), the sort of critical error we would never see from the infallible Batman.

Vigilantism is illegal in most Western countries and for good reason. Individuals do not have the sorts of checks and balances that the criminal justice system has (as described above). Gangs of vigilantes would be described as a lawless mob by most societies – yes that describes groups of superheroes such as Batman and his associates, Birds of Prey, and even the Justice League. Unchecked power and it’s darkness was the point of Mark Millar’s The Authority and Alan Moore’s Watchmen. What really is the difference between Sadie and Batman other than one wears a cape? Neither could possibly be arbiters of infallible justice.

Because, as described in our previous review, Sadie has killed women for money and not just men for justice, she finds herself on the outer of her former colleagues. And Sadie’s sole ally dead by Sadie’s hand. Scarlet’s departure from the title was genuinely surprising. (Mr Torres and Mr Valdez fittingly give Scarlet a warrior’s death.) Sadie now finds herself hunted by those who would otherwise assist – a feminist vigilante infrastructure with seemingly unassailable roots into politics and charity – as well as the police. How and whether Sadie survives is an unfolding, gripping story we will be watching very closely.

Popova #2 is available from Popovaworld.com and from Comixology.