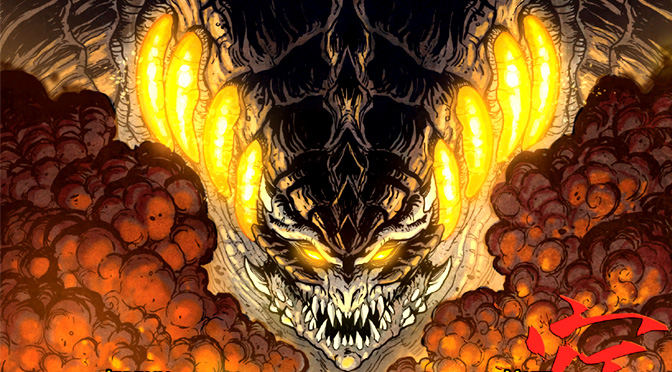 a. the murder of a young Japanese girl named Maigo; and
b. the discovery of what seems like the fossilized remains of an ancient giant reptile (fans of the Japanese “kaiju” genre, discussed further below, will recognize the fossil as being similar to Hollywood’s first attempt to adapt the “Godzilla” franchise) by a character named General Lance Gordon and two accomplices, one of which is killed onsite in order to keep the whole thing under wraps.

The comic then segues to introducing the protagonist, Jon Hudson. Hudson is a lead investigator for the United States Department of Homeland Security’s “Fusion Center-P”. This unit is considered by other agents as a joke because it handles paranormal threats to national security (recalling shades of the television series “The X-Files”). The story finds Hudson and a sheriff named Collins reluctantly hunting down a sasquatch.

The connection between the murdered Maigo and General Lance Gordon then becomes apparent. Maigo’s corpse was spliced with the giant reptile’s dna in order to produce a reptilian clone. The clone’s heart was used as a replacement for the heart of General Gordon, revealed later as suffering from coronary heart disease.

The story then kicks into high gear in a very macabre, very Japanese way. Even without the heart, the reptilian clone’s body comes to life and starts killing and eating everyone it comes across, growing in size and savagery after each meal.

Meanwhile, Agent Hudson and Collins in their hunt for a sasquatch come across the remote facility where the clone is wreaking havoc. The two protagonists have a near-fatal encounter with the creature, which is apparently rampaging towards a specific direction. From thereon, the story turns into a giant monster feature as the US Government tries to stop the creature.

The clone is dubbed “Nemesis,” and by this stage of the story has grown large enough to tower above houses and buildings. The abilities of the creature are formidable: rapid evolution, rock hard skin that it can shed in order to evolve into a different form, and orange membranes in its body that explode when pierced, incinerating everyone nearby. The explosions also burns the creature’s skin, triggering yet another metamorphic evolution.

While everything is happening, General Gordon is also undergoing a metamorphosis, exhibiting enhanced speed and strength, becoming increasingly violent, and walking in the same direction as the creature.

The comic (and the novel) draws upon the “kaiju” (a Japanese word meaning “strange beast”) subset of Japanese cinema. This inevitably relies upon the premise of a reptilian giant rising from the sea and carving a path of destruction across a country, along with some visual effects that bring to mind the “Godzilla” franchise. It would be very easy for “Project Nemesis” to plainly echo the kaiju tradition, where the hubris of men and the dangers of unchecked scientific progress result in a biological weapon of mass destruction.

Partly to illuminate the popularity of the kaiju genre, but mostly for self-indulgent entertainment, we include here a wonderfully entertaining infographic entitled the “KAIJU SIZE CHART”:

Writer Jeremy Robinson steers away from the salutatory lessons of the kaiju genre, and blends mythology into science, thereby allowing the reader to interpret and divine the ambiguity. Is Nemesis actually an ancient alien that just so happened to make its way to Earth? Was the ancient creature once worshipped as the goddess of Justice? Or is it simply a giant monster causing death and havoc?

The answers to these questions are easily discerned by just following along, particularly with regard to Nemesis’ destination and goal. But much like the monster movie films that inspired the story, “Project Nemesis”’ main appeal is the action pieces, the sheer thrill of watching a colossal monster run rampant on modern civilization. Mr Robinson and his editor also deserve credit for adapting a novel into comic book format without resorting to walls of expository text. Someone unfamiliar with the source material could easily assume that the story was written specifically for the comic book medium. We can recommend this comic to kaiju fans who want a decent comic book take on the genre.

The Eleven Most Fearsome Giant Monsters in Comic Books