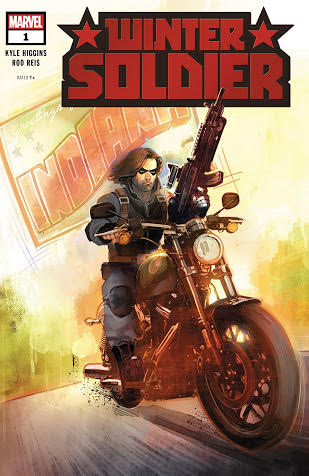 The first time we reviewed a Winter Soldier title, back in 2014, we were not subtle in our views: “The story entirely suffers from a lack of focus at both an authorial and editorial level. There is very little to redeem the plot decisions made by Mr Kot and his editor. The dialogue is scatty. There is no obvious direction to the story: it is a series of tangential ramblings. It seems that like the publisher, both writer and editor are at a loss to know what to do with the Winter Soldier.” That series, concerned with placing the title character into space, did not last long.

This new title, four years later, shows much more promise. Writer Kyle Higgins has Bucky Barnes, cyborg Russian assassin and former Captain America sidekick known as the Winter Soldier, in a much more down-to-earth role. Working out of Indiana, the Winter Soldier’s new raison d’être is to engage in a sort of witness protection program (but without the need to be a witness). Crooked cops and others who have made mistakes and want to start new lives can contact the Winter Soldier using Tor and seek rescue and relocation. This is a novel approach to both the character, and to the expectations of the superhero genre more generally – it goes well-beyond fighting whoever is the rotating super villain of the week.

The character has long-been cast as haunted. Mr Higgins depicts the Winter Soldier as having flashbacks to a time when he was a mindless tool of the Soviet Union, and throttling to death a doctor who offers to help him. But Mr Higgins does not have much to work with here. The Winter Soldier can never really be cured of the sins of his time as a deadly and merciless assassin – it is one of the compelling aspects to the character. Once, a rule of editorial thumb at Marvel Comics, the publisher of this title, was that Bucky Barnes could not be brought back from his World War 2 death in fighting Nazis with Captain America. Having dramatically brought the character back and redeveloped him against the odds into a very popular superhero, Marvel Comics are not about to mess about with a formula which works. And so Mr Higgins can explore the very dark depths of the title character, but never rid the Winter Soldier of his demons.

Placing the Winter Soldier in Indiana, rather than in New York with every other Marvel Comics superhero, is a bold move. (In the Marvel Comics Civil War crossover (2006-7) promotional event, the feline superhero Tigra laments being redeployed to Arkansas.) But from the perspective of the plot, having the title character in the region where the escapees are to be relocated makes some sense. Nonetheless, we see a visit by Iron Man (sans armour as Tony Stark) who seems intrigued enough by small town Indiana to hang about for fireworks.

There is a sense that the character is being used in a compelling and believable way. Complaints about the title being “boring” are in our view misconceived. The title character is a knife-fighter with a missing limb from a wartime injury which left him for dead. Setting him in rural America, engaged in quiet work that does not involve capes and tights, seems to be a natural environment.