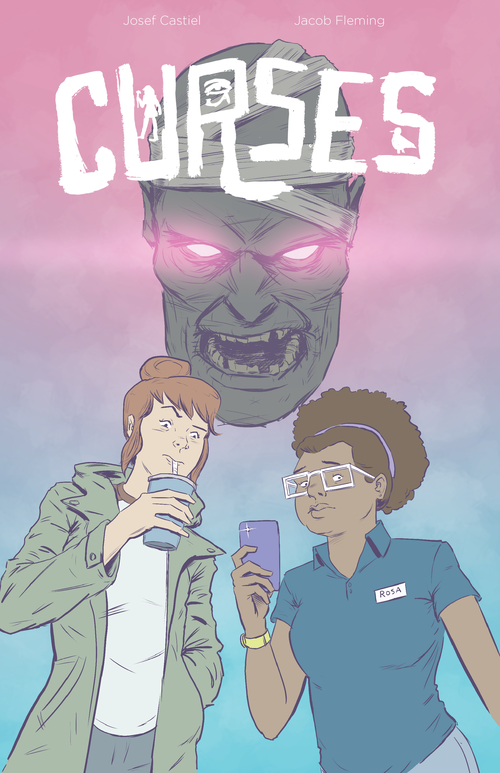 One of the most sensible things to do in independent comic book publishing, and one done so rarely done that we cannot think of another example of it, is to deploy an editor. Too many independent comics suffer for the absence of an editor. Writer Josef Castiel and artist Jacob Fleming are the creative team behind the webcomic Curses, and they have an editor, Paul Hobbs. Editorial oversight, that process of review, feedback, guidance, and sanity checking, is a hallmark of professionalism. It is evident in Curses through the crisp dialogue, the angles in the art, the proper placement of word balloons. Curses is plainly good, and we suspect Mr Hobbs is at least partially responsible for the refinement.

The plot is reasonably straightforward. Two young women named Rosa and Megan are passing time in a convenience store in Hesby, California, waiting for Rosa to finish her shift. Mid-banter they hear a noise from a back alley. Very unexpectedly, they see an Egyptian mummy, magically animated and muttering in an incomprehensible language. The mummy staggers into the street, where it is hit by a passing pick-up truck, and disappears into dust. The two women decide to work out what they just experienced, and to be prepared just in case the event reoccurs.

The plot’s superstructure is clever and very amusing dialogue. The exchanges between the two main characters are express homages to the likes of the 1970s children’s cartoon Scooby-Doo and Duck Tales: muck-about adventures involving the resolution of eerie mysteries. There is even an oblique Buffy the Vampire Slayer reference in there, when the duo decide the best way to solve the mystery is to visit a library, to learn the “mummy rules”. Rosa explains: “You know like how every monster has rules. Zombies have to be shot in the brain, vampires don’t like garlic and sunlight. Mummies have to have rules!” Megan asks, “Do libraries even exist anymore?” The mummy, of course, manifests again within a library aisles. Why a mummy appears in Hesby, California is a source of enormous bemusement to the characters.

As a threat, the mummy is hardly from the script of the motion picture The Mummy (1999) – which also gets a mention within the dialogue. There is no summoning of undead legions or colossal sandstorms. In this comic, the mummy crumbles to dust a second time when Megan smacks him in the back of the head with a library book.

Mr Fleming’s art does not in any way let the story down. The sterile environment of the convenience story is juxtaposed with the gloomy setting of the back street alley. The mummy is appropriately rotting away beneath his bandages, and when he looms with arms out-stretched past the reader, Mr Fleming effectively conveys the sense that the mummy is going to pop out of the panel.

This is a fun and polished read. We look forward to seeing how the story evolves.