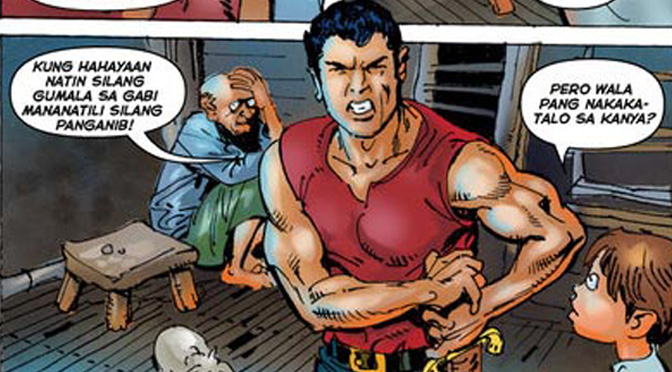 “Ang Panday” (lit. “The Blacksmith”), which first appeared as one of the serials in the Filipino weekly comic book anthology “Pilipino Komiks” in 1979, is the definitive Filipino comic book hero. The property has become a household name among Filipinos – even those who have not read the original comic – owing to a series of film adaptations that starred the late Fernando Poe Jr. (Mr Poe Jr was an influential actor whose popularity was enough to almost win the 2004 Philippines Presidential elections.)

Unlike its local contemporaries, “Ang Panday” is not inspired by western superhero properties. The protagonist’s look, powers (or lack thereof), and rogues gallery are inspired by themes closely tied to Philippine history and culture. In lieu of a tight-fitting spandex costume, the definitive version of Panday wore a simple red vest, dark pants, and a pair of boots. The villains that the character fought range from paranormal creatures based on local folklore, to street thugs, and Spanish soldiers (the Philippines was colonised by Spain from the 1500s to the latter parts of the 1800s. Panday’s enemies are inspired by the division of the Guardia Civil stationed in the country at the time, notorious for corruption and systemic human rights abuse.)

The first iteration of “Ang Panday” was a normal human named Flavio, who fought street level gangsters and criminals with the sledgehammer he uses for work. While the character is depicted as an exceptional brawler that can subdue multiple opponents, he had no powers besides above average strength developed as part of his backbreaking work. His grim trade mark was to use a cattle brand on defeated opponents, which serve both as punishment and as a warning to other criminals.

The lack of back issues and the creator being a film director/script writer by trade make it difficult to judge whether it was the comic or the film that first introduced a mystical element to the ongoing plot. Flavio eventually chanced upon a meteor that fell from the sky, which he used to fashion an ornate dagger. The dagger’s extraterrestrial/supernatural origins gave it unique abilities. These include the ability to shoot energy bolts, cut through even the hardest of substances, nullify magic attacks, and turn into a broadsword if the situation requires. The sword is also depicted as somewhat sentient, being able to warn its user of danger by humming.

The stakes also got higher. Instead of avenging victims of mugging and rape or fighting crime syndicates, Flavio started tussling with the paranormal. The sword proved effective against witches, flesh-eating beasts, ghosts, and demons. The character’s prime nemesis was also introduced – the demon prince named Lizardo.

As noted above, the comic version eventually gave way to numerous film versions, and the plot has spawned numerous spin-offs (featuring descendants of the original Flavio) in both films and TV serials. The Panday character was also notable for making cameos in other Filipino superhero films as far back as the 1980s, effectively tying together the universes of many of the country’s superhero franchises. (One shouldn’t expect any semblance of coherent continuity due to licensing issues on the one hand, and the lack of interest in building a cinematic universe on the other.)

In many ways, this comic is an indicator of the vibrancy of the Filipino comic book industry. Over the past couple of decades, there have been repeated attempts to revive the comic version, with little to no success. The reasons cannot be blamed on lack of quality or intent. Rather, the cause is a mainstream comic book industry that has never recovered from its 1990s slump. What little comic book industry that the country has at the moment is supported only by entrepreneurial indie publishers and a handful of publishing houses that rely more on novels and textbooks for sustainability. This makes any attempt to revive the “Ang Panday” title very difficult, as there is very little audience to expect and even less in the way of potential financial return. This is, sadly, a far cry from the 1980s when the Pilipino Komiks anthology that carried “Ang Panday” managed to sell hundreds of thousands of copies on a weekly basis.