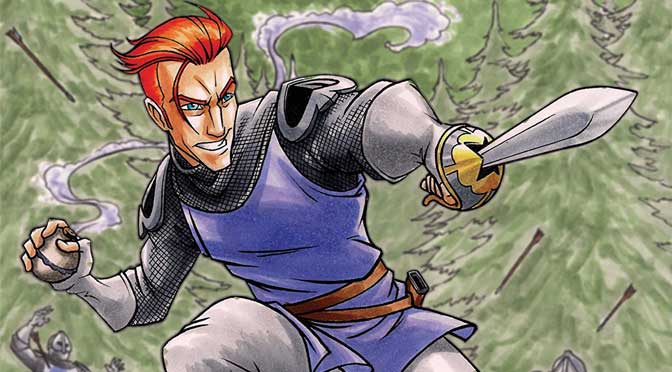 The Saga of the Jack of Spades #1-3
Nothing Works Entertainment Inc, 2017
Writer: Chase Kantor

Canadian independent comic book publisher Nothing Works Entertainment has released the first three issues of fantasy epic, The Saga of Jack of Spades.

We have two immediate observations about this title:

1. Game of Thrones, a series of novels by writer George R.R. Martin which are the subject of a television series beginning in 2011, looms large as an influence in this story. Royal houses plot against each other, with sinister dealings such as kidnapping and assassination mixing with strategic decisions such as massing armies on borders as a signal of displeasure and bluff. Armoured soldiers bearing swords and pikes stack the bodies of the dead, in order to set fire to them (“Oy mate! You’re stacking’ ’em wrong! The big ones go on the ba’um, init!”). An innocent child is beaten by men who should be her protectors. The entitled take advantage of the common with no accountability. It is a bitter and grim existence.

Game of Thrones has had an enormous influence in reshaping fantasy epics away from “sword and sorcery” to something much more reflective of the reality of living in medieval times. There are many creative works in the market seeking to emulate Game of Throne‘s success. This title is yet another one in the thick crowd.

2. The writer, Chase Kantor, has over-egged the poker metaphor. Each of the royal houses is named after a suit in a deck of cards. But this conceptual metaphor spills heavily into the dialogue. One liners such as, “I always knew you were wild, Jack,” and “Do you know what the gods hate more than traitors? Bluffs,” pepper the conversations between the players, to the point of risking irritation of the reader.

Our second observation is a pointed criticism: the first observation is neither here nor there and barely a cause of complaint. What is clear from the first three issues of this title otherwise, however, is that Mr Kantor has clearly thought through his complex and interesting plot. And, unusually for the genre of a periodically-published comic book where the focus is typically on immediate gratification of the desire for action and plot movement, Mr Kantor is allowing his story to unfurl in a measured way.

Most of the action in these first issues occurs in the Kingdom of Spades. The protagonist is a prince, Jack of Spades, a rakish, red-headed man who is missing an eye. While drinking in a pub, Jack is ambushed by a man in a jester’s outfit. Jack deploys athleticism with the skill of a practiced hand-to-hand combatant. The scene ends with an arrow flashing in the light, with Jack as its target. The preamble to the main plot, a flurry of action, is the hook to the reader.

The preamble cuts away to a flashback from three years before. Jack at that time is noticeably younger, holds the title “Lord High Minister of Executions”, and is best described as an amoral drunk. The pretty wife of a condemned man sleeps with Jack in order to save her husband from the axe. But mid-way through their dalliance, he tells her that nothing can be done. He then admits that he does not know her husband’s name, and that he cannot remember her name, either. She storms away, leaving Jack to quaff more wine.

Jack later confronts the Ace of Spades, a sinister bishop who acts as a grand vizier to Jack’s father, the King. “Let me make myself clear,” says Jack. “Men. Fear. Me. If you were smart, you’d follow suit.” The Ace can barely hide his mirth at Jack’s bluster. “My dear boy,” he responds,”they laugh at you.”

These two scenes are together a well-written introduction to the calibre of the man.

And his father, the King of Spades, has no time for, and no good opinion of, his son. The King and his advisors are depicted in a war room studying an enormous map. It evolves that the Heart Kingdom has mobilised an army to enter a place called Neutral Valley. Apparently believing their King to have been murdered by agents of the Spade Kingdom, the King and his men apprehend that the Heart Kingdom might take vengeance by killing Jack. That would lead to war. “Do what you will. Lock him in the dungeon for all I care. Just keep the brat alive,” says the King.

Jack is detained but escapes, and hides in the trunk forming part of the baggage being taken by a war party seeking to kill members of the Euchre, a band of outlaws. The soldiers are led by Field Marshal Montiore. Jack tries to disguise himself in armour, but the commander quickly apprehends Jack’s presence. Unexpectedly Jack accounts for himself well during a skirmish by getting close to the action and throwing a smoke grenade. Once the action is over and Jack is exploring the Euchre hideout, Jack is almost killed by a Spade trooper – the soldier is an assassin. Jack is saved by his mysterious and potentially traitorous mentor, Tell, who, it evolves in the third issue, is a leader of the Euchre.

Hamlet in the Heart Kingdom

Issue three switches scene entirely. Here we meet the Heart Kingdom, and the angry Prince of Hearts. The Prince has been away, leading a flotilla in a raid on pirates. The King of Hearts is dead, but he is the victim of apparent suicide. Noblemen disrespect the King’s death by playing games, including fencing. The Prince is outraged and exchanged harsh words with the men, one of whom openly disrespects the King as a suicide. The Prince calls out all of the men as conspirators. But then it evolves that one of the duellers is his mother, the Queen. “Your father was a kind man,” she says after removing her fencing mask. “I loved him dearly. But the truth is that he oozes and whored his way through your inheritance. The Heart banner isn’t with the paper it’s printed on.” Again, this recalls Game of Thrones. But the Hamlet-esque rage of the Prince is an engaging subplot.

The issue then reverts to studying Jack’s misadventure. He has been captured by Tell and the Euchre and is detained in their city, called the Tower. Somehow he evades the axe man’s blade and finds himself, perhaps months later, bearded, a captive in a snowy encampment. There, the third issue ends.

There is an impeccable barb and riposte in the third issue. Jack says to Tell, “By the time I’m through with you, Tell, there’ll be so many strings around your neck people mistake you for a marionette.” But later, when it becomes apparent to Jack that he is entirely at Tell’s mercy, Tell says, “I pull the strings here.”

The three issues are otherwise laced with sardonic humour:

a. When Jack locks himself in the trunk, he mutters, “In retrospect, not the smartest idea, invading Euchre territory locked in a trunk with a bladder full of claret.”

b. The Field Marshal’s reply to Jack’s question, “Do I get a horse?” is wordless: Jack is given a donkey to ride. “You’re a funny man, Montiore,” says Jack, ridiculously mounted on the donkey’s back.

c. And when Jack confronts the notorious Knave of Spades, Jack offers to tell all, including “the true identity of our Dickfor.” The Knave is puzzled. “Dickfor? What is a dickfor?” Jack smirks. “Oh? No one told you?” Jack is promptly dragged away in chains, his pun making him no friends.

On His Eye, We Shall See

The story of Jack’s lost eye is yet to be told, and nor do we yet know how he is transformed into a capable combat veteran. There is passing mention of Prince Hector of Diamond, no doubt a future antagonist, and no word yet of the inevitable appearance of the Club Kingdom. Jack’s adventures are played out on a grand scale, and Mr Kantor is right to tell his epic and engaging tale at this appropriate, jaunty, but measured pace.