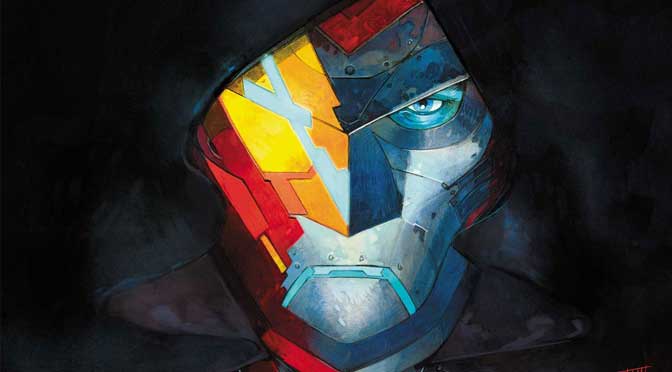 The conversion on the road to Damascus is well-documented in the New Testament: known as Saul, a Pharisee, the man who became St Paul was charged with the arrest of followers of Jesus when he was confronted by a blinding light. A voice identifying himself as the son of God ordered Saul to do the work of Jesus. And so Saul changes his name and became an ardent Christian – in many ways, the person responsible for the survival and rapid spread of Christianity in the decades following the crucifixion of Jesus.

In this title, “Infamous Iron Man”, perennial evil-doer Dr Doom, a doyen amongst American publisher Marvel Comics’ villains, has like Saul experienced an epiphany. The character’s purpose as a superpowered antagonist has become extinguished. There is no point to villainy any more.

Dr Doom suddenly becomes a superhero in this title (and in Marvel Comics’ recent “Civil War II” publishing event), yet this suddenness is not abrupt or false. The shift in thinking is portrayed by writer Brian Michael Bendis, a man with a recognised forte in characterisation, as an inevitable conclusion. With the impetus for his villainous activities a resolved problem, what next? Dr Doom, long portrayed as a master of both advanced technology but also magic, clad in sinister grey armour, always had his intellect as the most formidable weapon in his arsenal. Rational assessment of his current circumstances leads him to adopt altruism.

But this is startling. Within the background literary superstructure of Marvel Comics, this is as if Joseph Stalin suddenly decided in 1947 to become a humanitarian. Dr Doom doesn’t just (literally, as depicted in the first issue of this title) sit at the table of preeminent villains in Marvel Comics’ universe. Dr Doom properly sits at the head of that table.

Dr Doom decides to rescue Maria Hill, the director of S.H.I.E.L.D. (an espionage agency) from Diablo, a minor and petty super villain. He does so with ease, leaving Director Hill utterly baffled. Dr Doom then visits the lair of Tony Stark, the brilliant billionaire who fights evil as Iron Man. Stark is recently deceased but he has imprinted his personality into his building’s software systems powered by an artificial intelligence (a nod to William Gibson’s constructs in the seminal cyberpunk novel, “Neuromancer”). In a conversation with the dead hero’s cybernetic ghost, Dr Doom reveals that he will take up the mantle of Iron Man. Stark’s AI seems very unimpressed.

In the second issue of this title, Dr Doom ambushes another villain, the Mad Thinker. Dr Doom steals the Mad Thinker’s new robot technology. This leads to a battle in which again Dr Doom easily defeats an outmatched opponent. One of the Mad Thinker’s robots escapes an explosion and threatens two young boys, after Dr Doom has teleported away. Somehow realising the peril, Dr Doom reappears, destroys the robot and apologises to the boys for his sloppiness in leaving a killer robot intact. The boys catch this act of altruism on a smart phone. It seems the world will soon know about Dr Doom’s new view on his purpose.

The backdrop to this is a slow and distant romance with a medical researcher, Amara Perera, and a hunt of Dr Doom by his old adversary, Ben Grimm, a founding member of the superhero team called The Fantastic Four, and who is otherwise known as The Thing. Grimm is a man who is in essence an animated and superstrong block of rocks. At the conclusion of the second issue, Grimm has located Dr Doom and resorts to his usual method of communication with the reformed villain, titanic violent punching. The old habits, the actions once applauded by the reader, now seem uncomfortably mindless.

The genre of superhero comics almost always adopt a sharp dualistic approach to characterisation. There are few characters in the genre which are ambiguous in morality. Having noted that, Marvel Comics does has many reformed villains in its portfolio of heroic characters. But to convert its principle villain convert to altruism, to “sell out” in paraphrasing the dialogue of the Mad Thinker, is a radical, engaging and brave step.