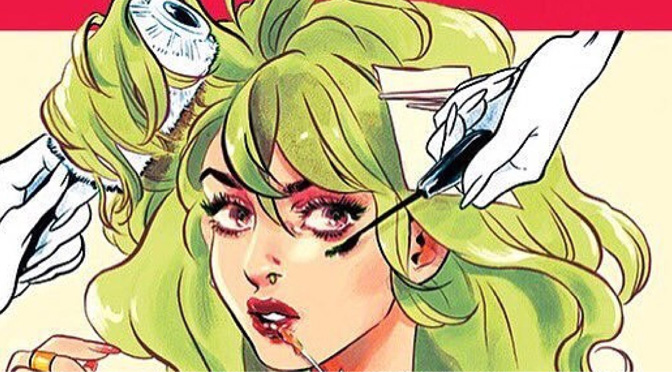 “Snotgirl” is a new ongoing series from writer Brian Lee O’Malley, known for the highly successful action comedy comic title “Scott Pilgrim”. The title concerns the lead character Lottie Person, who is struggling with allergies that give her a runny nose at inopportune moments.

Like “Scott Pilgrim”, “Snotgirl” seems to be geared towards teenagers and twenty-somethings, but the main difference is that instead of videogames and geek culture, it focuses on the world of “fashion blogging.” The comic introduces Lottie Person as a quasi-famous fashion blogger living in downtown Los Angeles. She hangs around schoolmates and friends who are also prominent in the fashion blogging scene.

Within the story, Lottie presents herself to people as a fun-loving social media celebrity living a perfect and colorful life, but when nobody is around she reverts to her real self – insecure, self-centered, and extremely lonely. The supporting cast are introduced only in passing in this first issue and in any event from the reader’s perspective are filtered through Lottie’s focus on reality. This means these other characters are reduced to nicknames based on their sense of style – “normgirl”, “cutegirl”, “gothgirl”, “scandigirl”. The running theme is that the protagonist assigns a nickname to anyone that she meets more than once. It is both dismissive and derogatory.

Along the way, Lottie meets an aspiring fashion blogger that she starts referring to as “Coolgirl.” Coolgirl is everything that Lottie aspires to be: confident, witty, beautiful, and effortless in the way she does everything. Coolgirl befriends Lottie, who in turn finds herself strangely attracted to Coolgirl yet extremely envious of her.

The comic takes a dark turn towards the end when Coolgirl accidentally sees Lottie struggling with her allergy and nicknames her “Snottie.” Coolgirl then gets into an accident, the last few panels portraying her lying face down in the women’s comfort room with blood pooling on her head. This part is unclear as to whether Coolgirl slipped or was attacked by Lottie, no thanks to the jumpy panel transitions. Is this ambiguity on purpose or just poor structuring? The issue ends on that cliffhanger scene.

This first issue does not give much reason to follow the series. The story seems to revolve around the main character’s obsession with herself and her hedonistic lifestyle, and her private struggles feel like crutches being used to give the character a thin layer of personality, a faux-complexity. It fails at making the “fashion blogging scene” relatable to anyone who is not already interested in it. Further, it makes fashion bloggers entirely vacuous and unsympathetic. The quirks and problems assigned to the main character do not help. Mr O’Malley seems to have tacked these on for the purpose of adding shallow drama.

The sole saving grace is the mystery being built. Coolgirl’s impeccable timing and uncanny ability to do and say the right things might be a hint that she is more than just a random stranger who shares Lottie’s interests. Is she a manifestation of Lottie’s sub-conscious? The accident at the end also has potential as a springboard for a more meaningful story. This reviewer will be checking out the next issue just to see where it goes, but expectations will not be high.