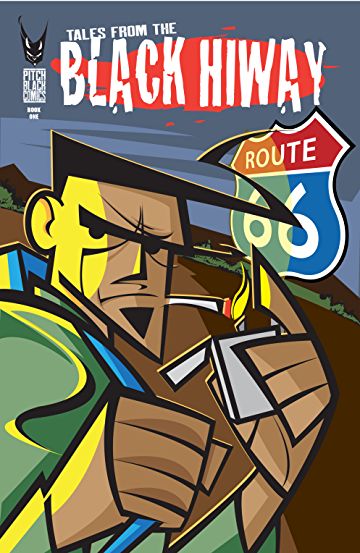 Southern Gothic, that sweaty literary offspring of the American Gothic of Poe, Lovecraft, and Hawthorne, is a horror sub-sub genre. Southern Gothic usually invokes the swampland of Louisiana, the decay of the postbellum South, the outlandishly grotesque amidst the oppressive humidity and blood-sucking mosquitoes. (In recent popular culture the television series True Blood and the Vampire Lestat novels of Anne Rice are perhaps the most visible examples. Amongst American comic books, we have the slow creak of Alan Moore’s Swamp Thing, and the backdrop elements of Grant Morrison’s Seven Soldiers of Victory.)

Somehow along the way, 1950s beat culture become drawn into the sinister mud of Southern Gothic. Perhaps this was inevitable, given Jack Kerouac‘ position on the purpose of life was to get lost, and just get by, in the uncertain company of strangers. And then in come the other wanderers of the American landscape: the train-born drifters, and, inevitably, the travelling circus.

Writer Rick Forgus invokes many of these elements into his comic. We asked Mr Forgus about his decision to delve into the Southern Gothic culture:

West Texas is desolate and empty. The roads always haunted me with visions of empty souls lost along the stretches of asphalt never finding a place to rest. THE WITCHING HOUR, THE HOUSE OF SECRETS, TALES OF THE UNEXPECTED, CREEPY, EERIE were favorite reads growing up. A wonderful escape from the ordinary and a step into the unknown. I am very influenced by Ray Bradbury as well. Bradbury’s SOMETHING WICKED THIS WAY COMES was my inspiration for a carnival of demons traveling the country devouring souls and imprisoning people for sustenance. Trains ran behind my house growing up and I dreamt of the wonderful places they could take me.

Strangely, Mr Forgus describes the comic as “ligne claire” in his promotional copy. Setting aside that error, his explanation of the raison d’être for this comic does not do it justice:

TALES FROM THE BLACK HIWAY is the story of Ray Lantry, youthful adventurer and traveler along the highway of the supernatural. Inspired by the travels and travails of the Beat culture, Ray embarks on a cross- country journey, taking the lonely back roads to search the small towns and their inhabitants for the elusive “truth” all writers seek.

A chance midnight meeting in an October cemetery brings Ray face to face with a beautiful woman dancing naked to the 50s music of Bill Haley and the Comets. It doesn’t take long for the ivory-skinned woman to hip Ray to the fact that she is the actual Angel of Death. Disbelieving, he accepts her offer for a lift and goes on a wild ride in her red convertible. She puts Ray on a twisted path that will test the limits of his sanity. At the first crossroads of his journey, Ray encounters a timeless traveling circus of mysterious performers who delve in the arcane arts of evil magic and hand to hand combat. A fight to the death with an armored Chinese warrior could cost Ray his very soul.

The plot is compelling and nails itself to a Faustian mast: allied in some way to the voluptuous Angel of Death, the central character Ray Lantry finds himself in the clutches of a demon, called Mr Pitch. Lantry’s double dealing with both the devil and death, and some quick boxing training, somehow extract him from a scenario of doom.

Lantry is a not a lost soul in a loose orbit around life: he is certainly footloose but is daring and clever. Mr Forgus explains:

Ray is an explorer. He has the desire to find truth on the road and he’s willing to take the risks that are presented to find it. I think in many ways he is very naive to the reality of the road and describes his path as a writer would. Along those empty lengths of highway are perils that he doesn’t suspect. Secrets are hidden in the shadows of the trees that line the open fields he hitchhikes, but also a reward for those willing to take that chance. I wanted to take the best of what Kerouac presented as a traveller and writer. Someone that was optimistic and had an intrinsic need to find something bigger than himself. I tried to channel Kerouac for the dialogues and wrote them in single drafts. More stream of consciousness and keeping the thoughts very pure and reactive to what Ray was experiencing. The dialogues were meant to solidify his direction and style as a writer.

But while the characterisation is intriguing, it is the dialogue which is sublime. Here are the best of them:

STRETCHES OF ROADS PAVED WITH SHOELACE WHITE LINES CONNECT THE SMALL TOWN THAT OFFER PLACES AND THINGS TO RUN FROM OR RUN TO. A
WRITER’S JOURNEY…MY JOURNEY.

ABOVE ME BLACK CROW WINGS DROP FROM THE NEARLY NIGHT SKY IN A MURDEROUS CLIPPED RIBBON FRENZY TO FEAST ON GRAVE FRESH FLOWERS.
LAST MOMENTS OF LIFE OFFERED BY THE DEAD.

A RUSH OF SOULS FILL THE TREES IN A MAD DASH OF LIVES PAST, FINGERS IN MY HAIR AND WHISPERS OF, “REMEMBER ME.”

These could be passages from Jim Morrison’s Stoned Immaculate.

The plot is a figuratively and literally an entertaining ride, but Mr Forgus is principally a poet. He jags at the heart with his words. That artisanal embellishment to this fun comic is wonderful to read.

This title is available on Comixology.