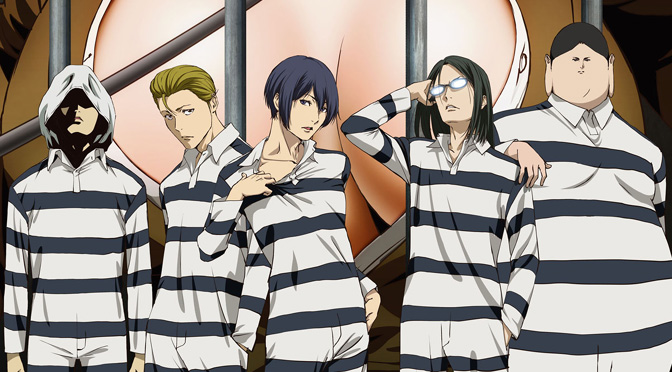 “Prison School” is a manga franchise written and illustrated by Japanese writer Akira Hiramoto. It started serialization in Kodansha’s Weekly Young Magazine on 7 February 2011 and continues to this day. “Prison School” has spawned an anime series and a live action TV series along the way.

“Prison School” is concerned with a fictional all-girls school in Tokyo called Hachimitsu Academy, which has a reputation for being one of the strictest schools in the region. The academy students are kept in check by draconian laws that punish the most minor of offenses with internment in the school’s prison (hence the name). The academy has student enforcers, a so-called “Underground Student Council” consisting of the school’s cream-of-the-crop – the student council president is also the daughter of the academy’s chairman, the vice president is physically strong to the point of being superhuman, and the secretary of the council is a martial artist.

The story starts with the academy trialling a decision to become a co-ed school. This is done by admitting five boys: the sickly Jo, the history nerd Gakuto, the delinquent Shingo, the comically large masochist Andre, and Kiyoshi. KIyoshi is the story’s Everyman in that he has no defining trait, but is the lead character and thus ground zero for every plot point.

Despite some of the five boys knowing each other from middle school, their conflicting personalities would have prevented them from being friends with each other in other scenarios. But their unique situation – that of being the only boys among hundreds of girls, at an age where boys feel the most awkward around the opposite sex – leads to the creation of a male clique. It is this awkward kinship and the characters’ struggles with the onset of sexual curiosity that has the boys figuratively and literally butting heads with the Underground Student Council.

“Prison School” is a seinen (literally, “youth”) manga, a genre aimed towards young men but accessible all the way to men in their 50s. As such the seinen genre occupies the thematic space separating the shonen genre (a genre targeted towards young boys) from seijin-muke (a genre that focuses on sex). Japanese comics are very frequently vehicles for pornography and this is generally regarded as acceptable in Japanese society. (The editor of the World Comic Book Review recalls being on the Loop Line in Osaka in 1996 and seeing a woman in her 50s reading a pornographic manga while standing in a crowded train carriage, and no one seemed to care.) Judging the appropriateness of Japanese manga by Western standards is something any critic does at peril.

Mr Hiramoto makes liberal use of the freedom that the seinen genre affords his story, by incorporating the following shonen elements:

But the title also incorporates an overwhelmingly large amount of sexual content. There are no actual nudity or sex scenes but there are many suggestive poses, revealing clothing, and plot points that revolve around the young boys’ obsession with sex. The exceptional quality of Mr Hiramoto’s artwork is important to this – he draws by any measure very attractive women.

This raw sexuality is somewhat softened by the fact that the boys are portrayed as clumsy, ignorant, and completely inept when it comes to interacting with females. The story is a Japanese “American Pie“, for lack of a better comparison.

The sexual content could have been dialed down and “Prison School” would still be a worthy read. Mr Hiramoto weaves complex story arcs that blend humor with politics, romance, and action without missing a beat. It’s common for “Prison School” to reference topics as varied as stock market trading, Sun Tzu’s “Art of War”, the Sphinx, and sumo wrestling within a single chapter and have it all make sense within the narrative.

The sexual content being superfluous to the franchise is best exemplified by certain chapters that tell straightforward stories. These include the flashback that told the story of why one of the characters is superhumanly strong and blindly loyal, and the farcical chapter that saw the group of protagonists being tasked to build a bottle rocket, only to build (and eventually deify) an actual rocket made out of plastic bottles.

Read with an Open Mind and a Closed Door

It is blatantly obvious that the art and many of the plot elements are designed to take advantage of people who want to be titillated. But it would be an injustice if this well-written story was completely ignored by readers who would readily dismiss the manga as soft pornography. “Prison School” is both the manga that you want to recommend to everyone, while paradoxically being the same manga that you would not want to be seen reading. (Unless you are a Japanese woman in your 50s in a crowded train carriage.)