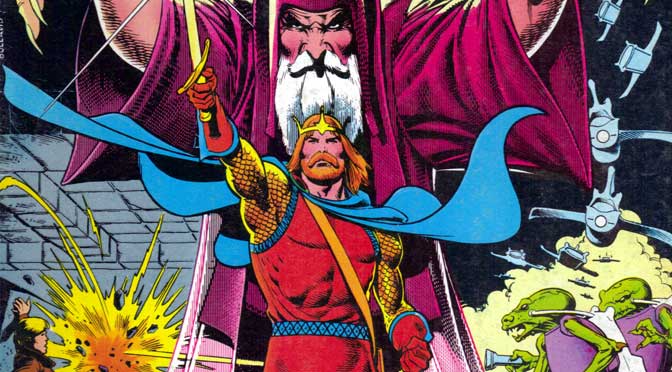 Camelot 3000, a story about the return of King Arthur (the subject of British legend and of the 14th century works of Sir Thomas Mallory) and the reincarnation of his allies and enemies in a science fiction future of aliens and ray guns, began publication thirty-five years ago this year. The underpinning story has not aged well, but the title carried some innovations. This review is a small acknowledgement of the occasion

The story behind the three year publication life of a twelve-issue “maxi-series” (as it was touted by American publisher DC Comics) is well known. British artist Brian Bolland, working for the first time with an inker he had never met across the Atlantic Ocean, put enormous detail into his penciled artwork, particularly in the last few issues. This resulted in extraordinary detail in the art of the title, but also meant that publication was increasingly delayed such that the last issue was published nine months after the eleventh issue.

Most of the critical attention paid nowadays to the title either relates to:

a. the paper. Camelot 3000 was the first comic in the world to be printed on high gloss, Baxter paper, as opposed to pulp paper. The paper made a difference. The very talented Mr Bolland’s work popped out of the issue, accentuated by the high quality paper upon which it was printed; and

b. the transgender issues. Sir Tristan, a very manly knight and the male protagonist of the 12th century story Tristan and Isolde, is reincarnated as a woman. The character initially struggles with this. Indeed, writer Mike W. Barr depicts Sir Tristan as tormented by the loss of his masculinity. Being trapped in the form of the gender he once preyed upon is a bitter irony. By the conclusion of the title, Sir Tristan has overcome his misery and is in a lesbian relationship with the reincarnated Isolde. This is the first time in a mainstream comic book that a transgender character’s sexuality was explored.

But Camelot 3000 has one other minor point of interest to note. Mr Barr envisages a future world of Balkanised nation-states, all separately represented in a fractious United Nations (and one run by a corrupt official in the form of the reincarnated Mordred, the evil son of King Arthur). To Mr Barr, the existence many thousands of countries equates to dystopia because it conveys the message of global disunity. With Brexit, the contemporary and high profile efforts for Scottish and Catalonian independence, an increasingly divided United States, and a dysfunctional United Nations, this vision is increasingly prophetic. Mr Barr also predicts China as a world power, something which would not have been obvious in 1982.

Mr Barr’s body of work otherwise includes writing on the Star Trek franchise, and many Batman stories (including the acclaimed Batman: Son of the Demon graphic novel in 1987). A deluxe edition of Camelot 3000 was republished in 2008, and very recently, there was reference to the concept in a television show called DC’s Legends of Tomorrow which reignited interest in the title.