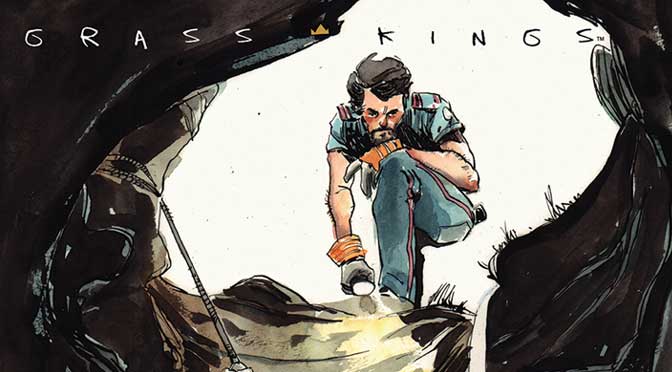 In 2016, American radio network NPR ran a story on the rise of survivalist real estate in the Northern United States, homes that can allow owners to exist “off-the-grid” and beyond the conventional reach of society. The story cites many of these impulses as conspiratorial, namely fears of economic collapse or social upheaval. Yet, as described by the real estate agent selling these locations, there’s an overwhelming desire toward personal freedom, a “need to be able to have someplace to go.”

This need for autonomy is the focus of “Grass Kings” by American publisher BOOM! Studios. The series chronicles the Grass Kingdom, a small community in the Canadian woods: part magical trailer park and part militant commune. Living independently off the land and nearby great lake, The Grass Kingdom operates as a respite for those who wish to live beyond the borders of society.

Many other stories feature similarly fringe societies, often going into some detail about the day-to-day operations of such communities, fetishizing the rugged ingenuity of their daily life. But “Grass Kings” offers little insight into the practical operations of the community. The title focusses instead on the interior and the personalities that populate this community.

Specifically, the series looks on the brothers who run the society: Robert, the leader; Bruce, the sheriff; and Ashur, the youngest brother. Founded by their parents, the Grass Kingdom is the life the brothers have always known. But better days have passed. By the beginning of the series, Robert’s leadership has faltered following the death of his daughter, who drowned in the lake. Bruce attempts to keep the community afloat and navigate escalating tensions with the nearby town of Cargill, a community at-odds with Grass Kingdom. He deals with Cargill’s imposing Sheriff Humbert and kicks out miscreants from the outside world looking to make trouble in the Grass Kingdom. In the first issue’s opening, Bruce removes one such interloper and again describes the absolute unity of his community. In spite of his words, he sends Ashur in his stead to check on Robert, who drinks and watches the lake in a guilted exile.

The first six issues of the series center on both repairing Robert’s break from the community and resolving the Kingdom’s boiling point with Cargill’s Sheriff Humbert. The catalyst for both events is a young woman who emerges from the lake. In his grief and inebriation, Robert initially confuses her for his daughter before taking her in as a surrogate. Upon the woman, Maria, is revealed to have ties to Cargill, the long-coming conflict comes to head. Though Robert regains his ties to the Kingdom and some sense of his former leadership, his rejoining is a means to protecting his symbolic daughter. During the fifth issue’s climactic fight against the Cargill Police, Robert leads the town in resistance while narrating his daughter’s favorite bedtime story.

The cumulative effect of these events is powerful, particularly as writer Matt Kindt takes his time with these developments. The series, particularly at its start, moves at a slow and unusually winding pace. This is so much the case that we felt it imprudent to review the series prior to the first arc’s completion. For some readers, this pacing may take some adjustment. The first issue’s final page comes as something of a surprise. This surprise is not triggered by a cliffhanger, but is instead due to a sense of obligatory climax not having been reached. Though reading Part One as a single collection makes this feature less apparent, the segmented monthly issues are a satisfying build to the sixth issue’s zenith.

“Grass Kings #7” begins “Part 2”. It explores further divides in the community. Robert and Bruce investigate the Grass Kingdom’s unknown history, looking for a murderer amongst their own. The series also begins to shift focus toward Bruce and his growing sense of disconnect from the place he has called home. The story reveals that he temporarily joined the outside world as a police officer, but was unable to tolerate the bureaucracy of law. He describes his journey into the outside world as a mistake, that he “took the freedom of the Grass Kingdom for granted.”

Comments by Bruce and other characters about the freedom of their land contrast the series itself, which is adamant that life beyond the traditional bounds of nation is not altogether “free.” Previous issues frequently open with segues depicting the land’s history and violence over the centuries, whether between neighboring indigenous tribes, competing bootleggers, or nations at war. The ghosts of communities now gone are felt throughout the series, particularly a panel in the fifth issue that shows a skeleton buried in the ground. Despite what the characters tell themselves about the place where they live, nothing feels like it’s really built to last.

Artist Tyler Jenkins renders the world for its impermanence. The watercolors utilized here would be strong in any story. But the hues have particular relevance in highlighting the ephemerality of their world. Colors often fade at the panel’s edges and stray lines cut into the comic’s gutter. The visuals lack finish and, as a result, do not feel longed to stay. Buildings are overgrown and the characters themselves tend to be rail-thin. Violence, when it occurs in the series, are accompanied by water stains, wiping all colors away.

Continuing into its second part, “Grass Kings” continues to be a well-composed look at the people who make up a community and a thoughtful examination of the impulses that drives them to live and die within it.