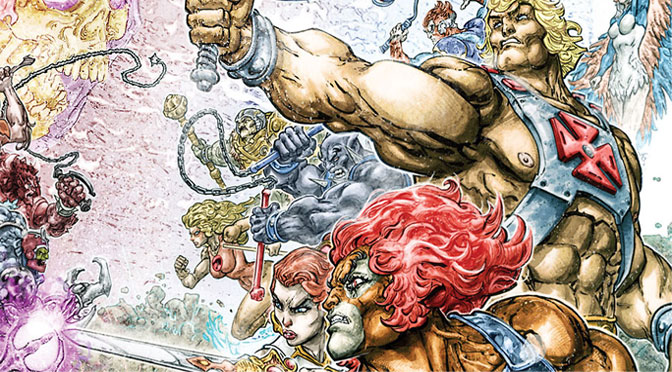 It’s quite clear that the “He-Man/Thundercats” crossover mini-series is designed to take advantage of nostalgia felt by readers in their 40s for the two properties’ respective toylines and cartoon shows. Both were globally popular among young boys during the 1980s. This is exemplified by the fact that the publishers are using the 1980s versions of the franchises instead of the updated takes that were released in 2011 and 2012.

The premise for the crossover will be painfully familiar to comic book fans that have read their fair share of DC Comics’ massive crossover events. The Thundercats’ Third Earth is being pulled into another dimension, one that contains the Masters of the Universe franchise’s home planet, Eternia. This interdimensional collision is a byproduct of the Thundercats villain Mumm-Ra the Ever-Living’s plan to steal He-Man’s Sword of Power.

The story is told from the perspective of a mysterious narrator. The plot features both properties’ respective roster of characters in action. Both groups are doing their best to contain the natural disasters resulting from the two planets coming too close to each other.

Towards the end of the issue, Mumm-Ra succeeds in stealing He-Man’s Sword of Power by masquerading as one of the hero’s allies. He is then betrayed by the mysterious narrator – He-Man’s primary antagonist, Skeletor. This first issue of the comic ends with this cliffhanger, with Skeletor in possession of He-Man’s powerful sword and set to take on the combined might of the Thundercats and the Masters of the Universe.

In terms of writing, Rob David & Lloyd Goldfine do a good job of providing a script that is not too out of character from the original cartoons (although Skeletor’s vocabulary in his narration seems too subdued for the character), while minimizing the hammy clichéd dialogue that stood in the way of these cartoons being categorised in the 1980s as something other than Saturday morning television fodder. Notwithstanding the hyper-epic plot, the story is markedly grittier than what you would expect from a He-Man or Thundercats cartoon, but, skilfully, without going over the top.

Unfortunately, the plot is the problem. The Thundercats and the Masters of the Universe could have happily coexisted without the need for an explanation, especially one used so often before In the genre of superhero comics, the forte of DC Comics. The decision to focus on how the different properties’ characters met each other only resulted in making the plot unnecessarily convoluted. The event of the two main characters of each franchise, He-Man and Lion-O, meeting each other for no apparent reason is much less outlandish and contrived than an entire planet being pulled from one dimension into another, all in pursuit of a magical sword.

The plot also falls apart when scrutinized: going to all the trouble of bringing Third Earth to Eternia just so Mumm-Ra can steal a sword that can match Lion-O’s Sword of Omens seems ridiculously roundabout. Surely, the entities that have enough power to break down barriers separating different realities have enough power to defeat Lion-O with or without a magical sword.

The decision by the writers to (apparently) kill off Mumm-Ra in order to give Skeletor control of the Sword of Power is also poorly thought-out – it ruins the novelty of having a Thundercats villain in possession of Masters of the Universe’s premiere weapon, especially since Skeletor has wielded the magic sword numerous times in the past without notable success in his endeavours to defeat He-Man.

Like the Transformers crossover comic we recently reviewed, “He-Man/Thundercats” #1 can be recommended only for readers who can enjoy the tangled and contrived crossover out of nostalgia. It is not awful by any means and does a decent job of setting up the story, but it does not break new ground and will be too confusing for readers unfamiliar with the source materials.