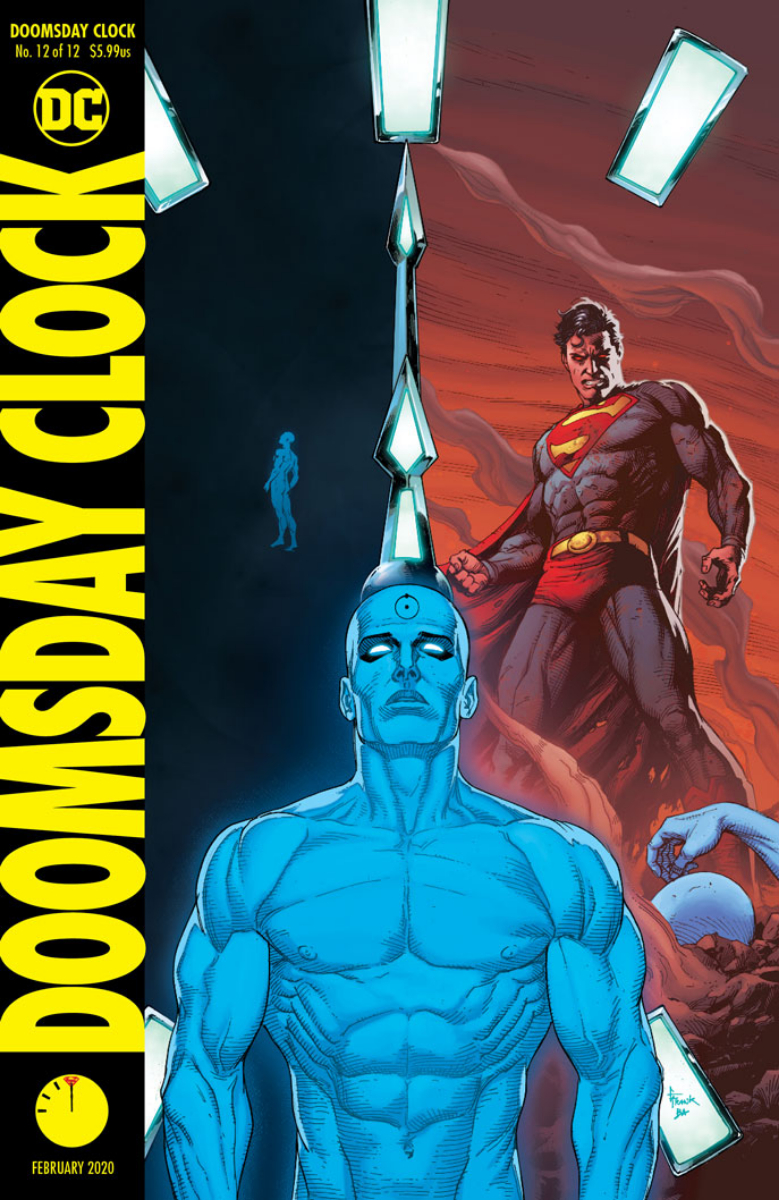 Our last critique of Mr Johns’ writing efforts on Doomsday Clock was bemused. Was Mr Johns making a snide comment about his new master at DC Comics’ ultimate owner, AT&T? If that was the case, it was one of the most admirably subtle stabs between the ribs we have ever witnessed. https://www.worldcomicbookreview.com/2019/08/21/doomsday-clock-10-review-dcs-commentary-on-the-att-takeover-of-timewarner/

Now, with the final issue 12 of Doomsday Clock, Mr Johns has concluded what was an audacious, ambitious, and outstandingly good story, involving the sacrilegious incorporation of Alan Moore and Dave Gibbons’ masterpiece Watchmen into DC Comics’ mainstream storyline. https://www.worldcomicbookreview.com/2018/02/10/sharpest-swords-doomsday-clock-1-3-review/But Mr Johns has effected this with an eye-rolling absence of sophistication. He sows seeds for DC Comics’ future haphazardly and with enormous self-indulgence. What had begun as a genuinely remarkable (and hubristic) effort at comic book writing, as noted in our very first review of the series, has an ending with the nuance of wet confetti.

Some of what Mr Johns has wrought will enthuse DC Comics’ brittle fan base: the return of the 1940s superheroes of the Justice Society of America, the reinvigoration of the Legion of Super-Heroes (we have discussed the decline of this concept previouslyhttps://www.worldcomicbookreview.com/2019/09/10/legion-of-super-heroes-millennium-1-of-2-review/ ), the creation of a new parallel universe containing the fan-favourite version of the Justice League from 1985.

1. repeated continuity reboots for the future; and

2. a team-up with Marvel Comics (or at least Marvel Comics’ characters Thor and Hulk) in ten years’ time. Given the timeframe, is Mr Johns planting a concept and then relying upon audience enthusiasm to cause it to happen? We wonder what sort of bafflement and bewildered telephone calls and emails ensued at Marvel Comics’ editorial team desk.

Mr Johns after all wears the hat of being DC Comics’ Chief Creative Officer, which gives him carte blanche over the panoply of DC Comics’ characters and storyline’s, and through this conclusion he endeavours to shape DC Comics’ storylines for the next decade.

But it is hardly a clever conclusion to what had been a clever series. It reads more like an advertisement for a series of crossovers. And no doubt Mr Johns’ successor as Chief Creative Office might be annoyed at having been corralled in.

Some of the other threads in the plot are tied up in the fumbled knots of a toddler’s shoelaces:

2. Dr Manhattan, inspired by Superman’s ongoing self-sacrifice, returns to his home dimension, sowing flowers as he walks as a Gaiman-esque indicia of life-giving.

Here is a comparison from Sandman #49 and Doomsday Clock #12:

Manhattan cures his world, destroys all of its nuclear weapons, and bestows his powers into a boy (the son of the Mime and the Marionette) who we have taken to calling “Kid Manhattan.” (In a patch of excellent writing, Manhattan has a reverie or what might have been, causing him to smile for the first time in either Watchmen and Doomsday Clock).

3. Mr Johns uses Rorschach as a mouth piece to attack the noise and fury of social media. How does Rorschach know about this? It triggers the amusing thought that Rorschach is on Twitter.