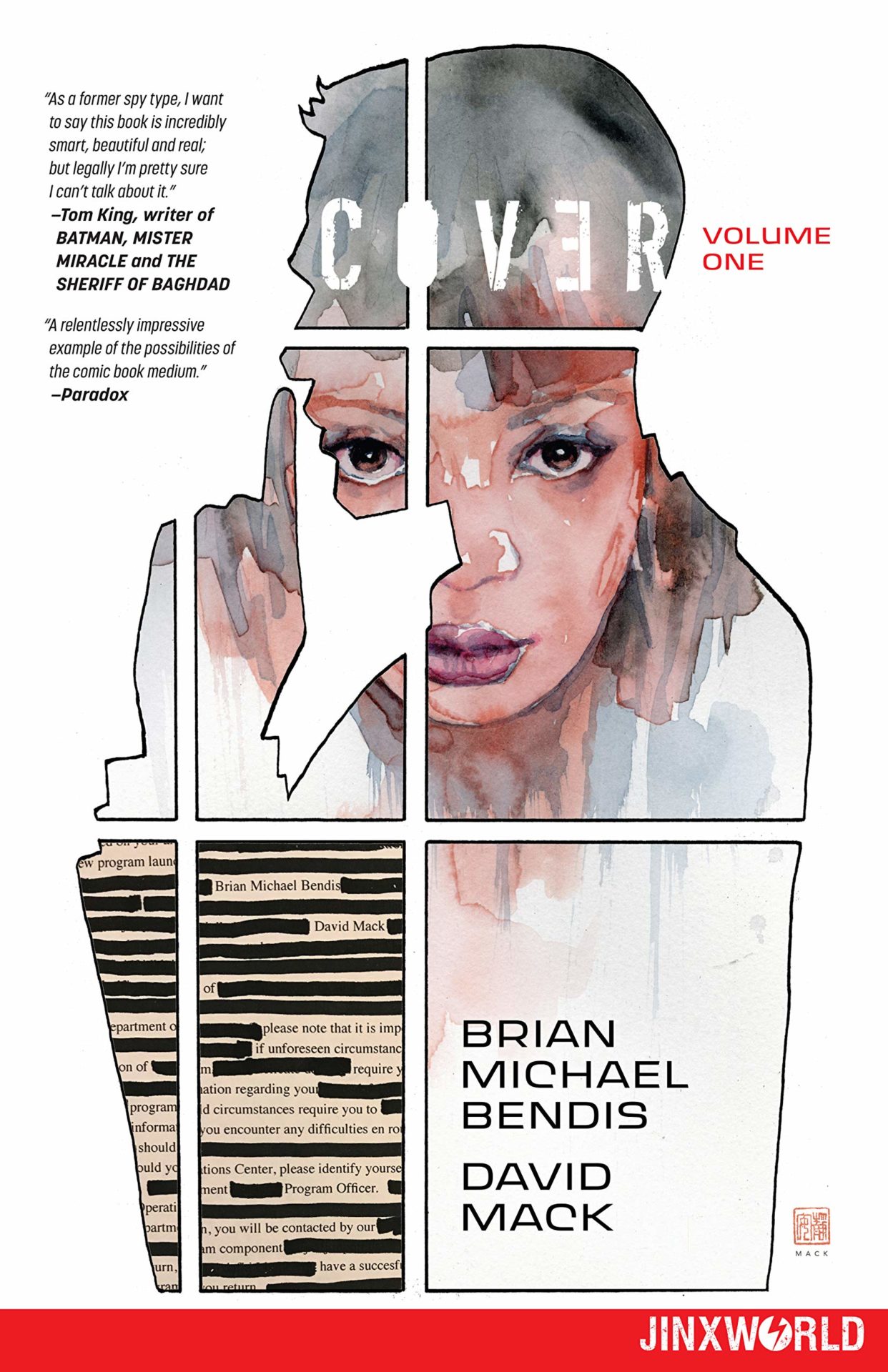 This is our first review of a week of espionage comics. We start with one of the best.

We are not sure how we managed to miss the publication of volume one of Cover earlier this year, other than sheer bad luck. Cover is a wonderful, funny, intriguing comic which draws upon the comic book profession experiences of the two very proficient and high profile creators, Brian Michael Bendis and David Mack. Mr Mack has the additional benefit of working for the US State Department as a cultural ambassador as part of a “Countering Violent Extremists” program.

You can easily imagine the creative process between Mr Bendis and Mr Mack underpinning the work. Comic book professionals travel the world for perfectly good reasons (the story ranges from a fictional comic convention in Turkey to a fictional comic convention in Brazil, and to the very upmarket and real French comic art festival, Angoulême). They are not really famous except in their niche but it is enough to get them access to the influential. And they are plainly harmless artistes who pose no obvious threat to anyone.

Mr Bendis and Mr Mack decided that this would be the perfect cover for a freelance intelligence operative – a reluctant one, in the case of the comic’s protagonist, Max Field (who we see as a stand-in for Mr Mack). Max is the creator of a Japanese period comic called Ninja Sword Odyssey, which has a small cult following. He is the unlikely cat’s paw of a spymaster.

Duplicity begins from the point at which you see the comic on the shelf. The title, Cover, is a play on words – a reference to the cover of a comic, and indeed, it describes what you are looking at – as well as the term for the lie masking a spy’s movements. And it continues on through the story, such that even Max is not sure what is real, and what is the delusion of an American comic book fan (who, to be fair, as a group can be a little flaky).

Mr Bendis as ever is engaging with his breezy and chirpy dialogue, which works particularly well with Max’s (presumably Central Intelligence Agency) handler, the charming and irrepressible Julia.

Mr Mack’s art is, as ever, impeccable, and he demonstrates his mastery in his contrasts the style of the extracts from Ninja Sword Odyssey with the art of the story of Cover. (We were interested to read in the introduction to Cover that Mr Mack’s magnum opus, Kabuki, was actually a visual arts thesis.)

But it is the underlying concept which is most bemusing, because it makes utter sense. Comic book professionals are harmless, and deal with harmless fanatics in what is to most people a somewhat eccentric (we confess) form of media. The outrageous scale of the CIA’s influence is revealed when Julia confesses that she is the person who has financed and organised a massive comic book convention in Brazil, for the sole purpose of having in the right place at the right time. It is a brilliant ancillary detail to the plot.

The turning point in the plot is crafted precisely for American comic book aficionados. When is being interrogated by another comic book professional who is working for unknown bad guys, a magic name is dropped by Max during his beating. Jack Kirby was the creator of many comic book characters, including Captain America, a character who spent much of his World War Two adventures depicted fighting Nazis. Mr Kirby did that too. He landed as an infantryman on Omaha Beach in Normandy and then, when his lieutenant learned he could draw, was sent out as a scout to sketch terrain. Mr Kirby was influential not just because of his significant portfolio of creations, but because, like his characters, he actually fought against evil, manifesting as 709th Static Infantry Division of the Wehrmacht of the Third Reich.

When Max notes that Jack Kirby would have been hitting another person for the right reasons, and not the wrong reasons, it has a profound personal impact upon Max’s tormentor, such that he switches sides. Julia, despite her love of Ninja Sword Odyssey comics, is not quite capable of understanding what has happened.

But Mr Bendis’ and Mr Mack’s audience know, precisely. By this twist, the creators emphasise to the readership that, first, strip away the haziness of international politics and intrigue and there are fundamental values of right and wrong, and second, the readership knows what those values better than most by reason of being comic book readers of the never ending battles between good and evil. This is a profound and inclusive conclusion to a very clever and entertaining comic.