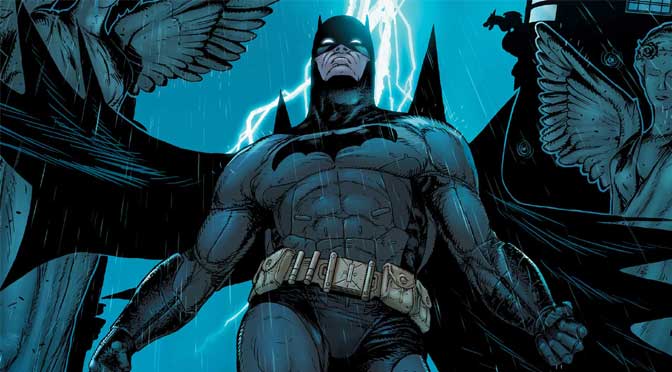 Batman: Sins of the Father is a new comic book miniseries from American publisher DC Comics, serving as a tie-in to a series of narrative-driven videogames from developer Telltale Games.

Bridging the gap between the first and the second of the series of games, the story follows the Batman and his alter-ego Bruce Wayne as he deals with a large-scale war between all the remaining gangs in Gotham City and a scandal that threatens Wayne Enterprises.

The story drops readers in the middle of a gunfight between two rival gangs, the Zuccos and the Bertinellis, with the police stuck in the middle. The gangs are fighting over a supply of high-powered weapons, and have stopped shooting at each other in order to focus their attack on the police force. The Batman arrives on the scene in order to stop the gunfight with as few casualties as possible.

The Batman’s portrayal in this scene is a perfect depiction of the hero. It relies not upon the kind of action scenes that make the character look like an unstoppable force of nature (despite not having any inhuman powers), instead showing the Batman as heavily reliant on his high-tech weaponry. There is also some good-old fashioned trickery, such as using blood squibs in order to fake death and catch his opponents off-guard.

The comic showcases great scenes that reveal that the factions involved, including the police, have agendas other than fulfilling an editorial quota for on-page violence. This ranges from the gangsters focusing their attention on the Batman because they want his weapons and the prestige of being the one to take down the vigilante, to the police force grudgingly accepting the Batman’s necessity in resolving the deadly situation.

Afterwards, the scenes segue into the aftermath of the battle, with Bruce Wayne’s butler Alfred worrying over his charge’s injuries, as well as the repairs needed on the Batmobile. Bruce Wayne, on the other hand, must contend not just with his injuries but must also put on his façade as he hosts a dinner event for potential investors. Wayne Enterprises desperately needs this after suffering from a public relations scandal involving Bruce’s dead father, Thomas, who is found to have committed crimes involving forcibly committing people to Arkham Asylum.

The comic is solid and fairly accessible up to this point. But the events at the dinner start to hammer home the point that this comic is heavily reliant on prior knowledge of the videogames. Thomas Wayne is a huge part of the Batman mythos. Most casual readers may only be familiar with Thomas Wayne as a positive role model for Bruce, as opposed to a criminal who has brought ruin to the Wayne name’s legacy and profitability (Various comic books over the years have already portrayed Thomas Wayne in a bad light, but these were mostly alternate reality stories.)

Less excusable is the fact that the comic only mentions Thomas Wayne’s indiscretions in passing, making no effort to fully explain the situation to a reader who has not played the games (which are fairly niche, even among video gamers.) This is unfortunate, as the quality of the writing is decent and would have made for a great standalone series, had it devoted a few pages towards keeping new readers up to date on the backstory.