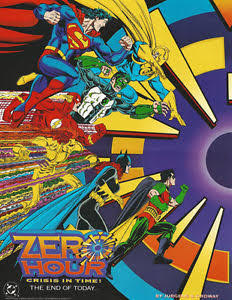 Long-standing readers of DC Comics’ superhero fare will remember the publisher’s 1994 comic book series Zero Hour. This was a limited series designed to reboot DC Comics’ superhero continuity. It was creatively remarkable in that some of the last pages of various issues were intentionally blank, to demonstrate erasure of the existing continuity. In 1995, DC Comics obtained registered  US trademark number 1874656 for “ZERO HOUR”. A registered trademark provides statutory ownership rights over a brand.

On 21 March 2019, Sony Entertainment filed with the United States Patent and Trademark Office (“USPTO”) a cancellation petition against the ZERO HOUR trademark. This follows the release of the “Firewall Zero Hour” game for Sony PlayStation console last year. Sony has a pending US trademark application (US number 87713622) in play seeking trademark protection for the game’s title. The USPTO’s trademark examiners rejected this application in September 2018. The examiner no doubt formed a view that “Firewall Zero Hour” was too similar to “Zero Hour”.

“There is no intent to resume use [of the DC mark] in connection with an ongoing series of comic book”, the petition claims – which makes perfect sense to DC Comics’ readership. “Zero Hour” was a bespoke title for a specific five issue comic book event which occurred a quarter of a century ago. “

However, in September last year DC Comics published the “Zero Hour” 25th anniversary omnibus. What this does is create recent use – a resumption of the “Zero Hour” brand. Sony’s petition might be in jeopardy, all because there is a market of readers in their 40s (or older) keen to indulge in some nostalgia.