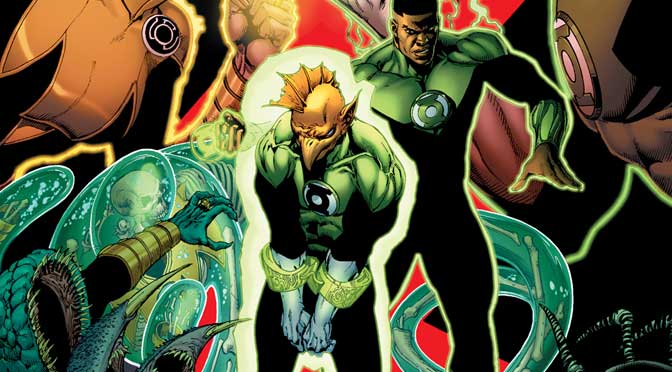 We have written about American publisher’ DC Comics’ “Green Lantern” characters previously. Our reviews of these titles have not been happy. This review has a very different tone.

“Hal Jordan and the Green Lantern Corps” #24 is not a great jumping-on point for new readers, as it is the third part of a storyline called “Fractures” that tackles the potential/eventual implosion of the alliance between the intergalactic peacekeepers called the Green Lantern Corps and their erstwhile rivals, the Yellow Lanterns of the Sinestro Corps. This alliance was established in earlier issues. (The complicated distinction between a Yellow Lantern and a Green Lantern is not worth going into here.) But to its credit, the issue is structured in a way that makes it easy for a reader who is already familiar with the Green Lantern mythos to fill in the blanks and understand what events are unfolding as well the reasons why, thanks to efficient use of dialogue and flashbacks.

The story underpinning “Hal Jordan and the Green Lantern Corps” #24 is essentially the tipping point, with a flashback scene showing Green Lantern Tomar-Tu and Yellow Lantern Fantas-M apprehending a rogue Yellow Lantern named Romat-Ru. There is a personal feud between Tomar-Tu and Romat-Ru. Both characters are described as being from the alien Xudarian race. But Romat-Ru is apparently a serial murderer of children. The character’s motivation for murder is that he is not merely killing individuals but murdering future leaders and heroes. The unfortunate end to all of this is that Tomar-Tu, in blind rage, summarily executed Romat-Ru. The character covered it up by capturing the fallen Yellow Lantern’s ring, preventing it from seeking a replacement.

Tomar-Tu realises the gravity of the situation. If word gets out of what happened, it could result in the alliance between the Green Lanterns and the Yellow Lanterns breaking down and both factions once again on opposite warring sides. In order to hide this, Tomar-Tu chose to keep the yellow ring trapped by using his will, the initiating force of a Green Lantern’s weapon, a ring which generates plasma fields and objects. This means staying awake perpetually. Some would think of this as punishment enough for his indiscretion.

The flashback ends at that point in the issue. Two human Green Lanterns, John Stewart and Hal Jordan, accost Tomar-Tu after the summary execution has been found out by way of a witness (actually, a spy) present at the murder scene. This plot thread is excellent in highlighting the differences in character between the two of the most popular Green Lanterns from Earth:

a. John Stewart plays everything by the book but puts in effort to control the situation, even pre-empting a blackmail attempt from a prisoner who wanted to expose the truth if his demands are not met;
b. Hal Jordan, on the other hand, looks to be more open to the idea of covering up the scandal. This is not surprising given the character’s past history – Hal Jordan in the past has gone to extreme measures in order to do what he believes is just, at one point even turning into an omnipotent mass murdering villain (this led to the Parallax debacle, which is subject for another discussion.)

This tension manifests when John Stewart starts to announce the details of the case to all the Lanterns. Hal Jordan finds himself standing between Tomar-Tu and a lynch mob of angry Yellow Lanterns who, ironically, want to take the law into their own hands.

Peripheral to the main plot is another thread involving another human Green Lantern, Kyle Rayner, and the Sinestro Corps’ current leader, Soranik Natu. The two characters are in a relationship which we find biologically curious. As explained in the two characters’ exchange of dialogue, their future son, named Sarko, has traveled back to the present time in order to prevent Soranik from breaking ranks from the Sinestro Corps and joining the Green Lantern Corps. A fight ensued that led to the future son’s death. Soranik is in charge of autopsy without knowing that she is dissecting her offspring. This led to Soranik’s entirely understandable anger at Kyle Rayner for holding back this information, attacking her former lover and burning the emblem on his chest.

This sub-plot is easily the weakest part of this story arc. It is unnecessarily wordy. Soranik’s outburst, while warranted, is out-of-character. The character has been depicted in the past as being more pragmatic and logical compared to her father and predecessor, the notorious Sinestro. It also has the potential to render the Tomar-Tu murder plot thread redundant. Soranik, as the leader of the Sinestro Corps, was the main driver for the alliance with the Green Lantern Corps. It was her directive that made majority of the Yellow Lanterns willing to work together with their long-time rivals. Whether the Yellow Lanterns and the Green Lanterns manage to overcome the problem over Tomar-Tu’s crime is irrelevant if Soranik decides to end the alliance.

Reviewer Reggie Hemingway at “Weirdsciencedccomics.com” broadly agrees with our assessment:

“There was something a little off about the pacing in this issue…the transition between scenes with John Stewart and Kyle Rayner was just slightly jarring. That’s a middling point, however, about a pretty good issue.” The transition, we think, is a practical consequence of the limitations of placing so much content into a single issue, a limitation of the standard American periodical publication of superhero comics. Pacing can be hard to achieve.

At “Adventures in Poor Taste”, reviewer David Brooke says “This issue breaks down into three dramatic scenes, each having two characters go at it with all their emotions and/or clever manipulations. Emotion has always been a big part of Green Lantern and Venditti uses it here in full force. There’s regret, anger, fear, hate, and more all on the page in this issue. It’s a lot to take in–it’s certainly high drama–and it’s enjoyable.”

“The tension that has been building in this storyline is amazing. I continue to be impressed with how Venditti has thread all of these stories together and kept the tension at this level. All of the personality conflicts and relationship dynamics have come to a head in this issue and it will be quite a task to satisfactorily solve these competing crises,” says Deron Generally at TheGWW.com. We disagree. Soranik’s break with Kyle Rayner in conjunction with Tomar-Tu’s murder of a Yellow Lantern all point in one direction – the breaking of the alliance. That single outcome resolves the multiple points of tension.

Alliances and feuds between different houses, with a romance and a murder linking the tension between the two groups of protagonists, all draw upon the conflicts and passions of William Shakespeare’s play, Romeo and Juliet. Because the title is set in space and involves aliens, the colour and movement of the setting and the physical appearance of the characters distracts from this underpinning theme. The writer cannot be faulted for the quality of his inspiration.

Despite our minor complaints over the Soranik-Kyle plot thread’s place within the whole overarching story, “Hal Jordan and the Green Lantern Corps” #24 still proves to be a riveting read that succeeds in building tension and anticipation for the next issue. On the disclaimer (and the understanding) that this is an ongoing serial requiring both prior knowledge of the franchise and some backreading, we can recommend this issue.