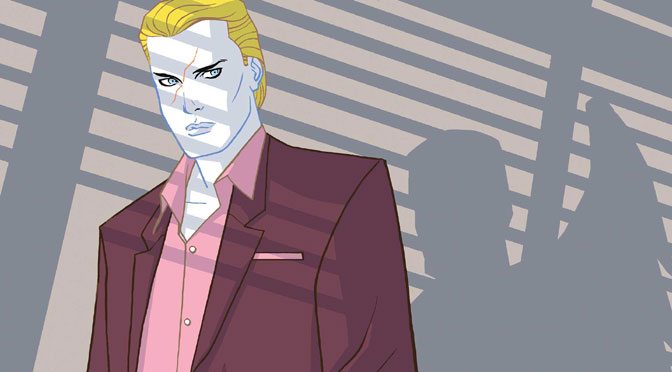 The 14th issue of Vertigo’s relaunch of the Lucifer comic book series is notable for two reasons.
First, it marks the start of a new story arc. The previous issue (which we have reviewed before) was a holiday special that serves as a much needed break after Lucifer and his cohorts have finally solved the mystery of who killed God (addressed in our review of the first issue here). It turns out that it was not so much a murder as it is a suicide, with God destroying himself so that he can be reborn. (The trouble with this is that this God 2.0 seems to be more in line with the Old Testament version of God – vengeful, aggressive, and autocratic.)

Only the timely intervention of the half-human/half-angel character Ellaine Belloc (who took over as the God of this creation in the pages of the original Lucifer series) saved Earth from being wiped out. Ellaine preferred to stay neutral, but thanks to Lucifer’s machinations, was dragged into the conflict.

With an implicit temporary ceasefire between the Host of God and Lucifer’s motley faction, issues #14 and #15 delve into what both sides are doing as they shore up their defenses and prepare for an all-out war. This boils down to God offering Lucifer’s illegitimate son a chance at revenge, and Lucifer looking for the angel Gabriel’s missing heart (which he believes to be crucial in gaining enough power to take on the Creator.)

The second reason why the 14th issue is notable is that it is the point where scribe Richard Kadrey takes over writing duties from previous author Holly Black. In our review of Lucifer #13, we criticized Mr Kadrey’s mischaracterization of Lucifer. But issues #14 and #15 show that our doubts were premature. Mr Kadrey has returned the sardonic, Machiavellian Lucifer that made the original series by writer Mike Carey so engaging.

Mr Kadrey’s depiction of Lucifer’s manipulative tendencies are best demonstrated in one scene, where Lucifer intentionally tried to coerce Gabriel into abandoning a personal mission. Lucifer says that he needs the fallen angel to do a more important task. Lucifer was unsuccessful in this and Gabriel went on to prioritize his personal task. But it was then revealed by Lucifer’s sometime consort Mazikeen that this was in fact Lucifer’s way of getting rid of Gabriel without hurting the fallen angel’s ego (Lucifer recognizing that they may need him later on).

This is not to say that the title is all smooth sailing in terms of quality. There are a few subpar elements to Mr Kadrey’s story. One of these comes in the form of the mage detective Arabelle, whom Lucifer has tasked with finding Gabriel’s missing heart. Arabelle, in both visuals and character history, looks like a slightly-altered and gender-swapped version of the character John Constantine from Vertigo Comics’ acclaimed series “Hellblazer”. Everything from the short, blonde hair, to the sarcastic dialogue, and right down to the trenchcoat/cigarette combo screams a female incarnation of John Constantine. We wonder whether there is a story-related reason for the similarities. If not, then this comes off as hokey and cheap, and possibly a workaround for that fact that John Constantine has been transformed in recent times from a skulking and ambiguously motivated survivor with knowledge rather than power, into a spell-chanting superhero.

All in all, however, Mr Kadrey’s first two full issues shows that “Lucifer” is in capable hands. There are a lot of future plots seeded in these two issues. The final page teases an eventual showdown between three generations of extremely powerful entities, as Lucifer arms himself in preparation for a fight with both his son and his father. The biblical grandeur of the title is back.