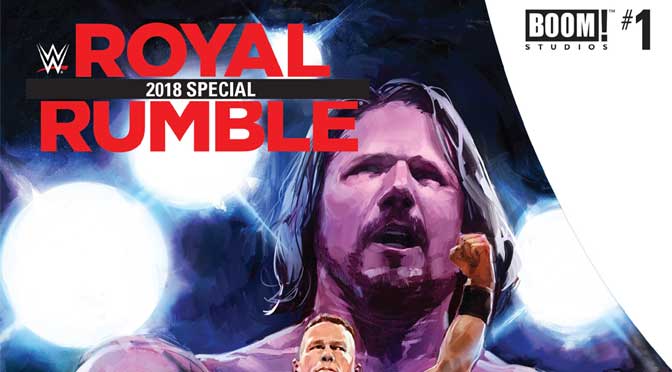 WWE Royal Rumble Special 2018 is a comic book published by BOOM! Studios. It leverages the globally popular sports entertainment brand, World Wrestling Entertainment (“WWE”), utilising the “Royal Rumble” name. A “Royal Rumble” is a type of competition in the WWE where 30 men enter the ring and try to eliminate each other down to the last man by throwing opponents over the top rope of the ring. The term is used both as an overarching theme for the stories, but also metaphorically – the comic contains several, unrelated short stories set in different time periods in WWE history, penned by different writers in a literary “Royal Rumble”. It is an amusing concept, to think of comic book writers in a last-man standing play-off, judged by the quality of their work as contained in a single issue.

The first short story is a fairly straightforward yarn that involves the wrestler Ric Flair. Flair is widely regarded as the best American professional wrestler, and had a forty year career in the business. This story has his cohorts, manager Bobby “the Brain” Heenan and fellow wrestler Mr. Perfect, trying to convince Ric Flair to accept that despite his stature in a rival wrestling competition, the WWE is a different place and there will be hungry newcomers that are going to want to use him as a stepping stone. It is a fairly uneventful story that tackles subject matter and personalities that will only be relevant to longtime wrestling fans.

The second short story is about the trio of wrestlers called “The New Day.” This group consist of very athletic African- American wrestlers that rely on humor to supplement their excellent in-ring skills. The story has the trio reflecting on their past successes in various Royal Rumbles, where they used their creativity and athleticism to escape elimination (including one walking on his hands as a loophole for the rule that both of the wrestler’s feet must touch the ground in order to be eliminated). Much of The New Day’s appeal will be lost on readers here, including readers who are fans of The New Day. This is because their gimmick relies on a lot of physical comedy, and their ridiculous skits do not translate well to the comic book medium:

The third story is entirely comedic. It features a narrative structure and art style that is fairly reminiscent of Scooby Doo animated cartoons. It revolves around high profile veteran Randy “Macho Man” Savage (who passed away in 2011) and his valet, Sherri Martel (who died in 2007), getting into all sorts of hijinks as they run away from the rampaging Ultimate Warrior (who passed away in 2014). Despite its comical tone and intent, some wrestling fans may find the story poignant as all three wrestlers have already passed away. (Sherri, Savage, and Warrior have since been inducted into the WWE Hall of Fame.)

The last story in this anthology centers around the wrestler named AJ Styles. The plot tackles the issue of how Styles is packaged and treated by the WWE as a rising star and a newcomer, even though he has been wrestling on a professional level for almost two decades. Styles has more tenure than many of the WWE wrestlers that are treating him as the new kid on the block within this story. The reason for this is that all of these past work were done under rival promotions, and the WWE does not want to promote or call attention to any work done outside of their brand.

The AJ Styles story is also notable because the credits indicate that the wrestler himself had actual input in the writing, so it is very interesting that a less-than positive view of the promotion and one of its top stars was allowed by WWE.

It is obvious that WWE Royal Rumble Special 2018 is targeted solely towards sports entertainment fans (particularly those who enjoy the WWE brand). Professional wrestling is niche and very prone to catering to an insular fan base (much like superhero comics). Accessibility is not a consideration in this critique, as it is expected that the stories will not be relevant to readers who are unfamiliar with (or dislike) the WWE.

To its credit, we do praise the fact that the stories are written specifically around the professional wrestling industry and its legacy participants. The title is layered with nostalgia which will appeal to many fans of the 1990s international heyday of the industry.

Our main criticism of another WWE comic, WWE #6, is that despite the presence of capable writing, the story only used the WWE brand as dressing. The issue strayed far away from things relevant to the WWE, effectively rendering the story as nothing but WWE-themed fanfiction. The same criticism cannot be levied at WWE Royal Rumble Special 2018. For better or worse, this is a WWE story first and foremost, and written specifically around the WWE. There is something quite admirable in that it is specifically crafted to reward its very loyal legion of fans. In that regard, it does its job well.